Sign Up
Log In
Purchase a Subscription
You have permission to edit this article.
Edit
Home
Community
Milestones
News
Sports
Business
Opinion
Obituaries
e-Edition
Classifieds
Share This
1 of 9 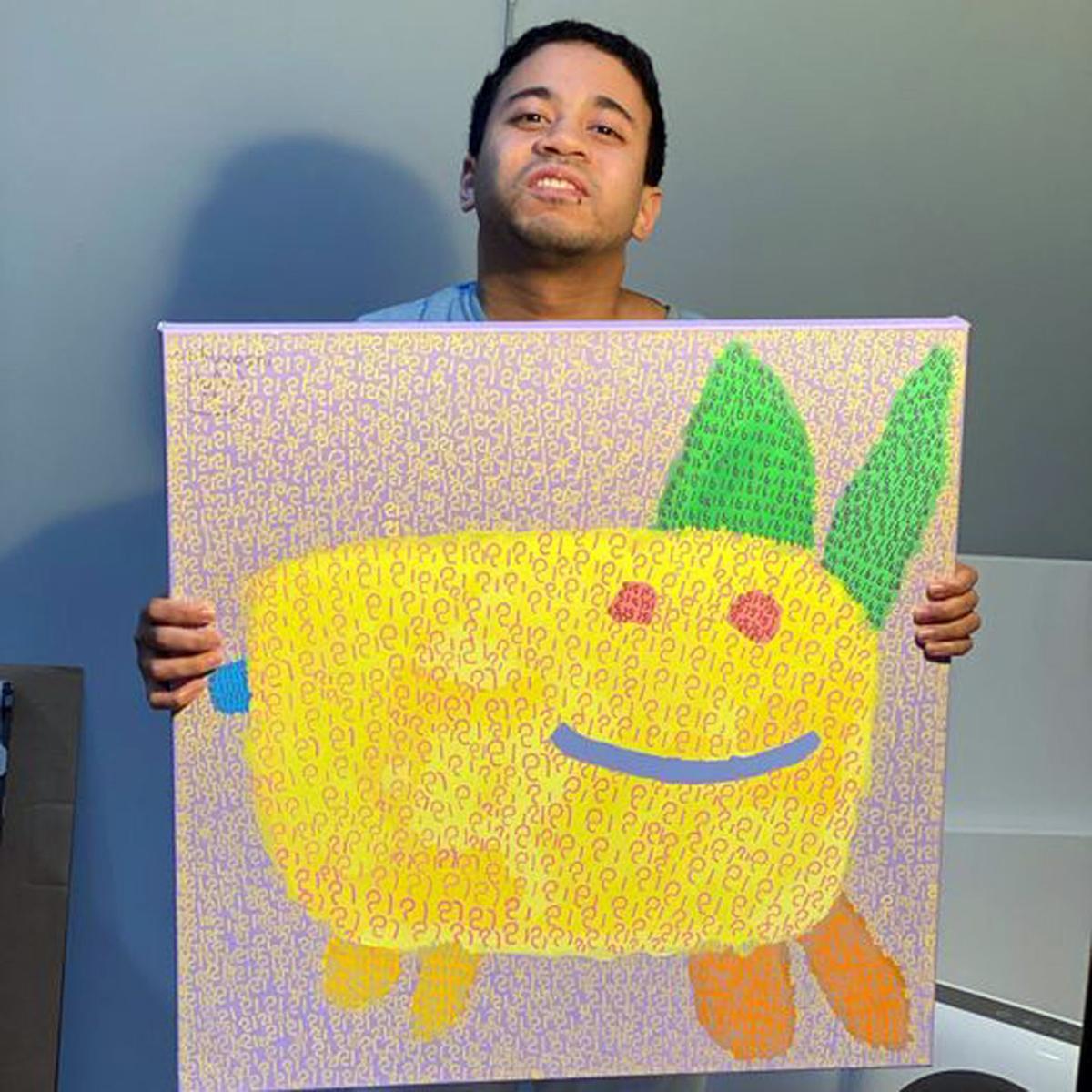 Artist King Nobuyoshi Godwin is pictured with one of his paintings of a snow rabbit king. 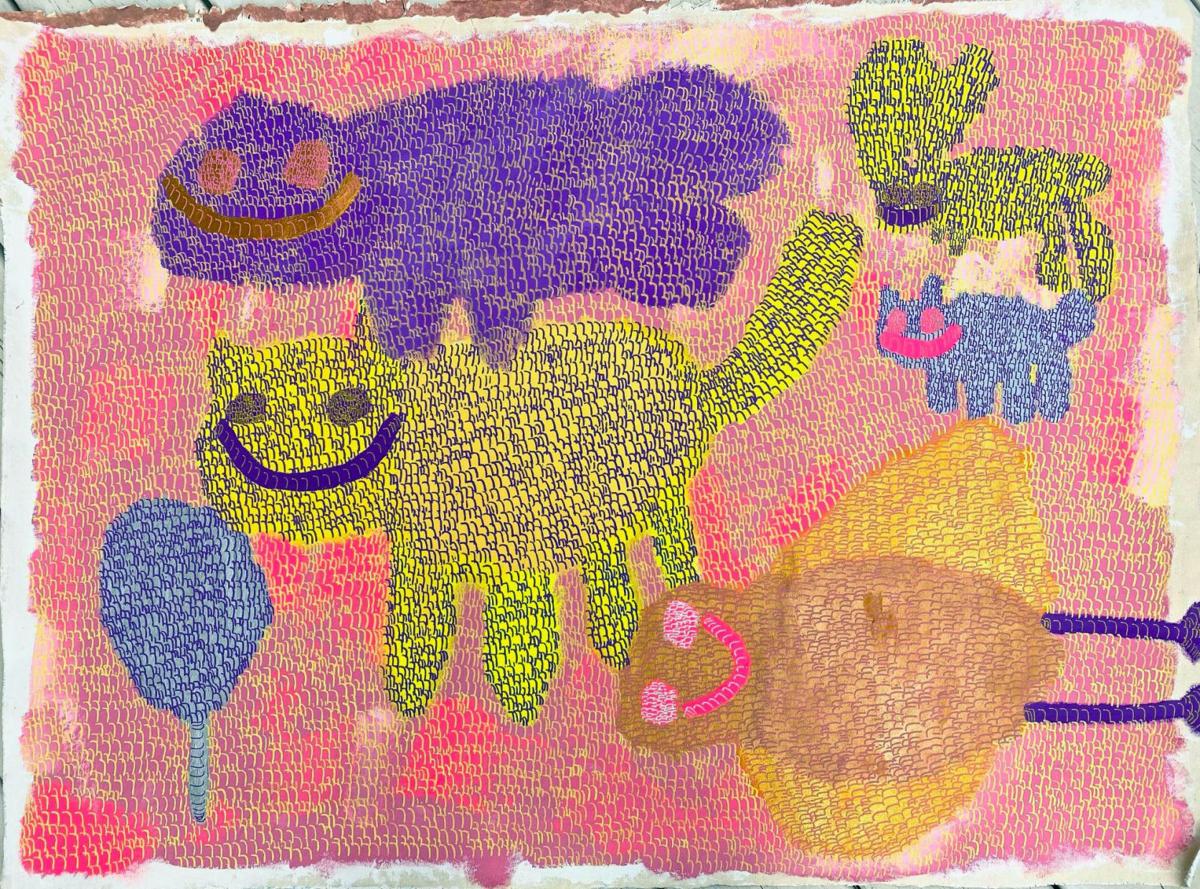 King’s painting, “The friends are doing great because they are together with the goats ‘7177’.” 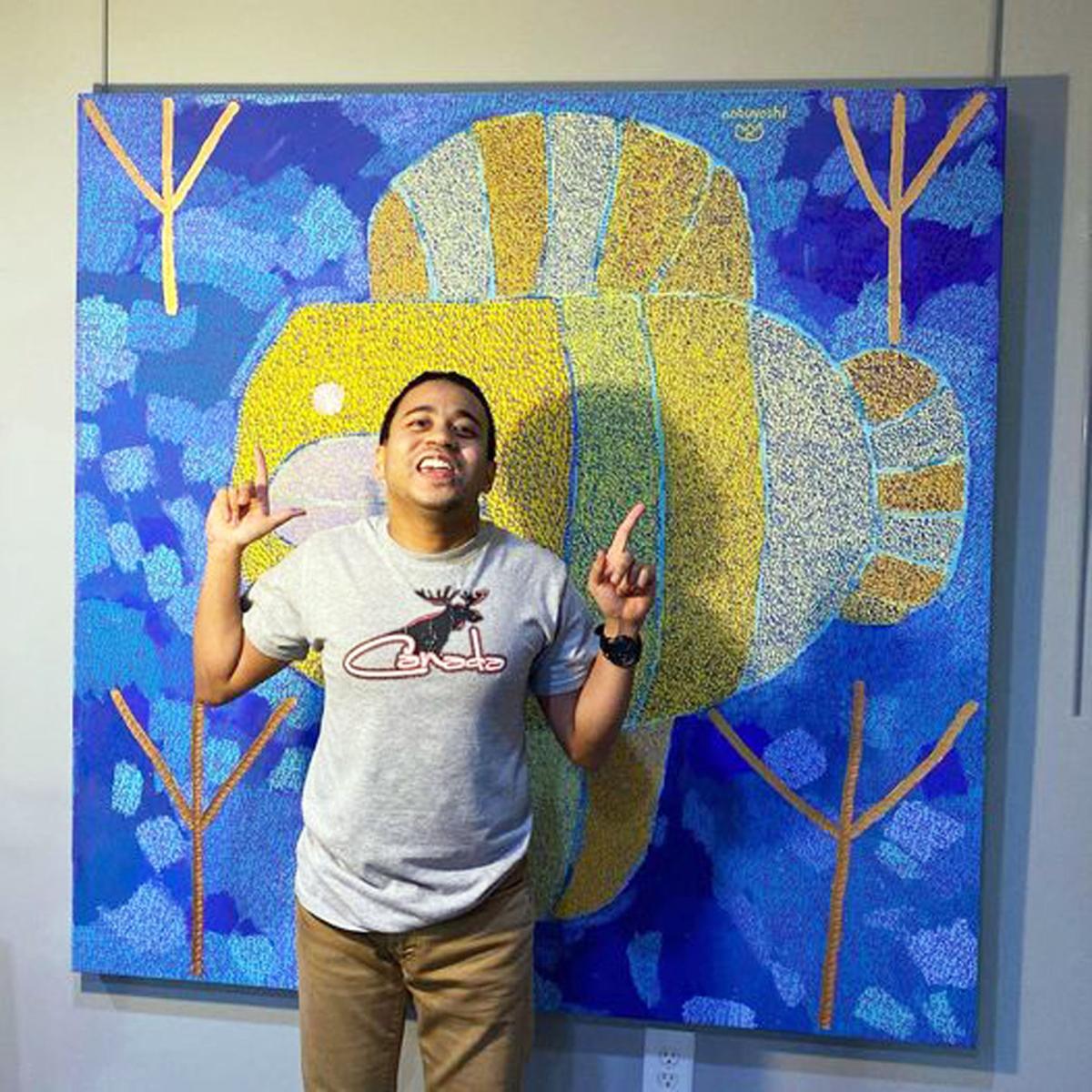 King Nobuyoshi Godwin poses with one of his paintings. 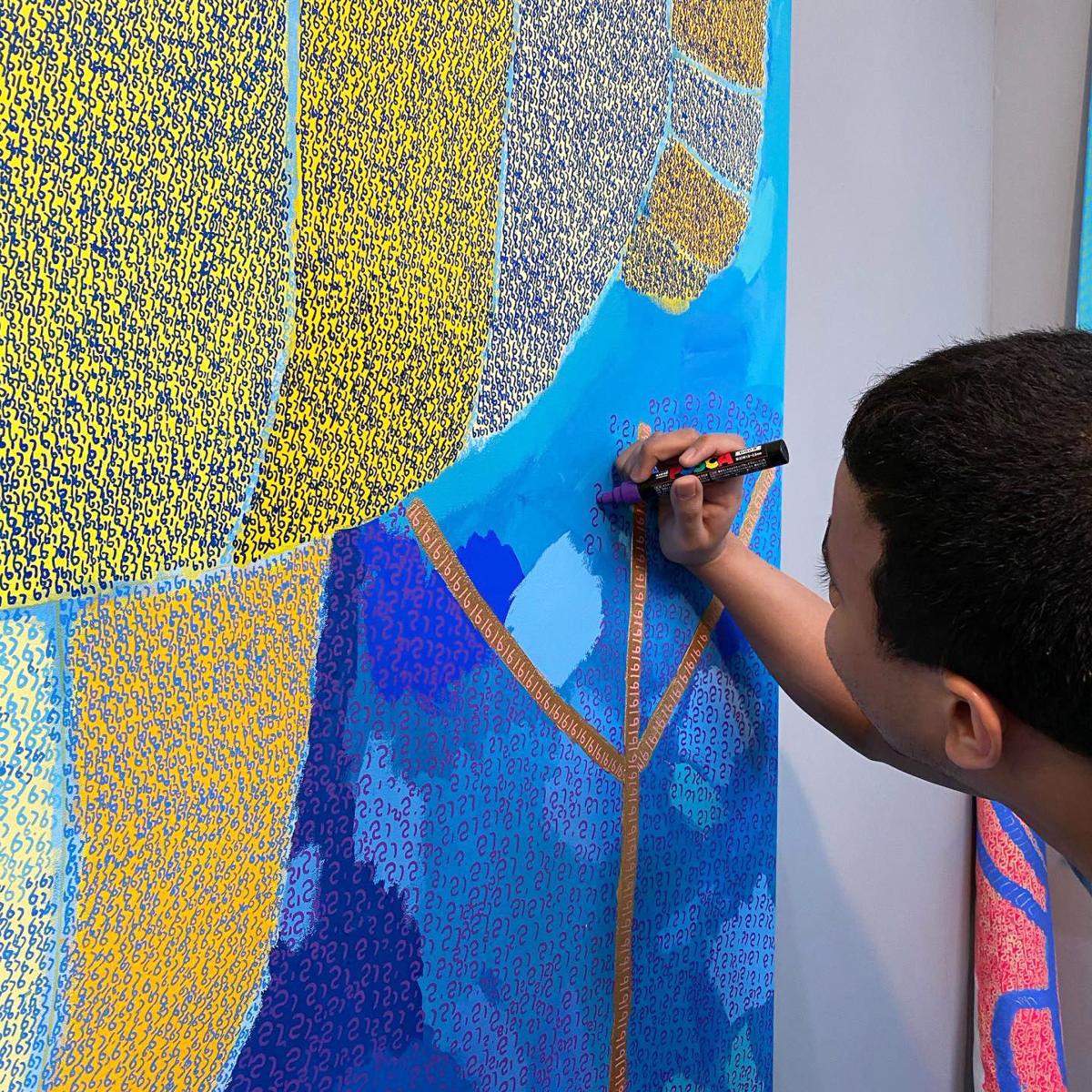 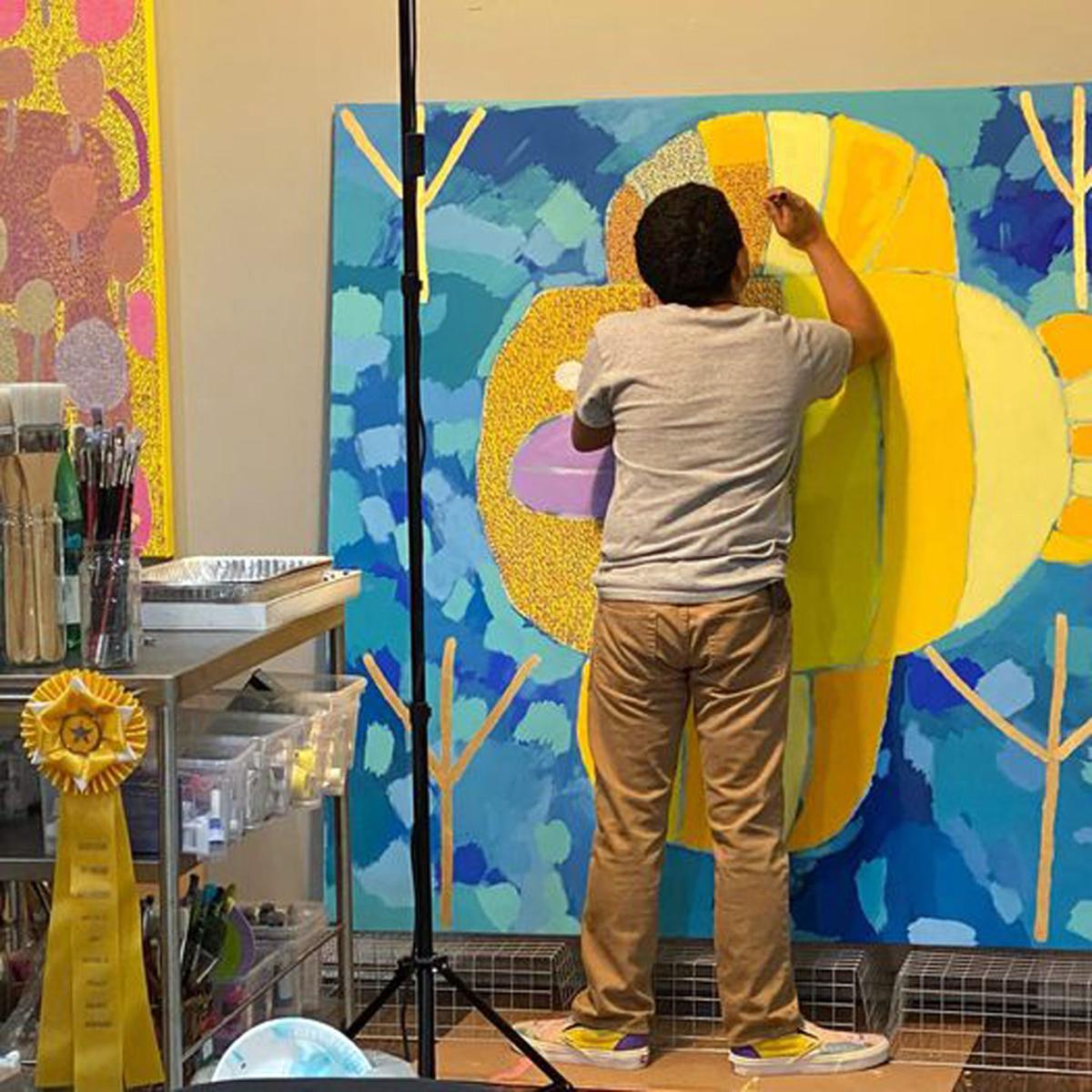 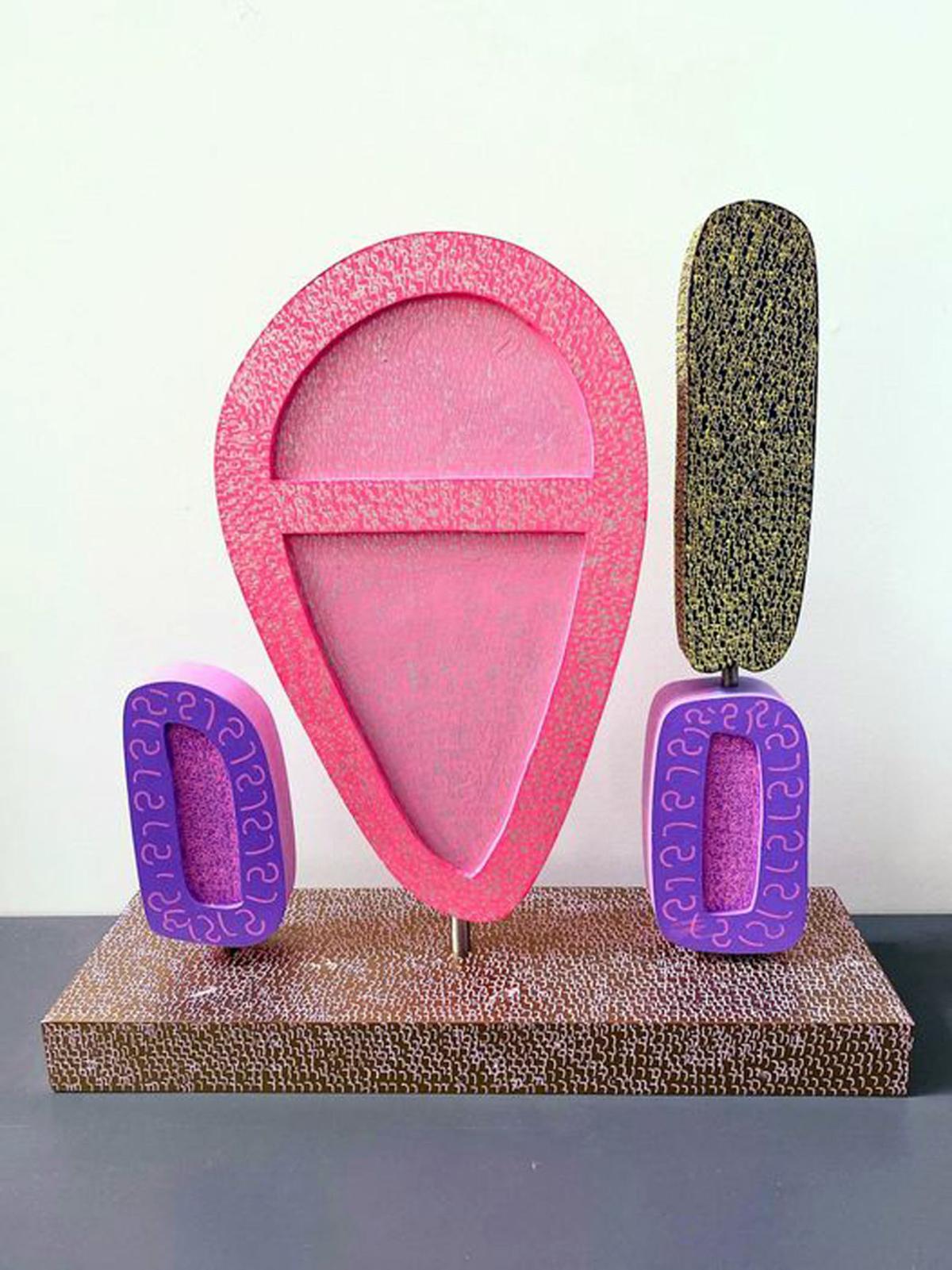 One of King's sculptures. 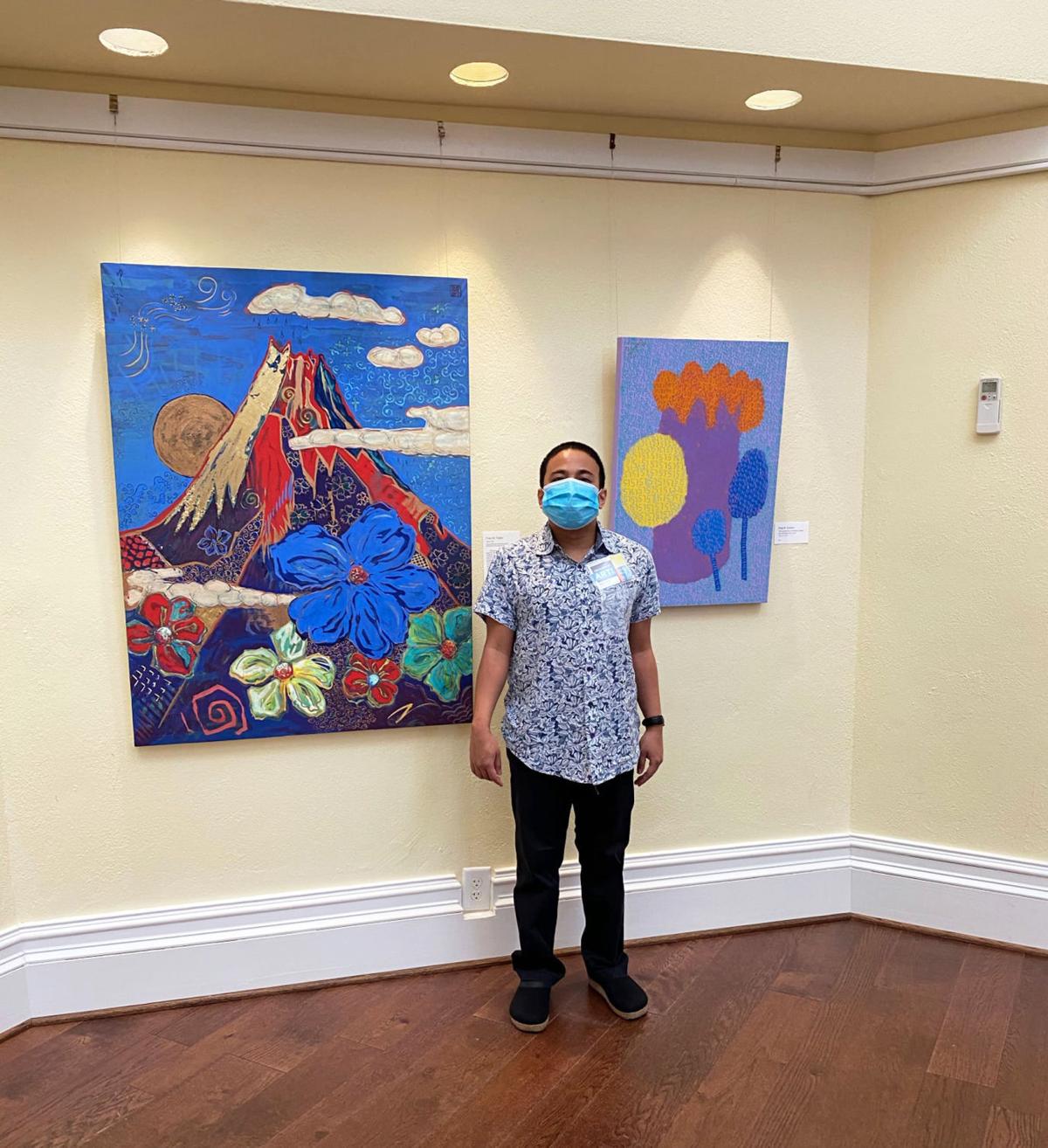 Artist King Nobuyoshi Godwin is pictured with his art displayed at Meredith College. 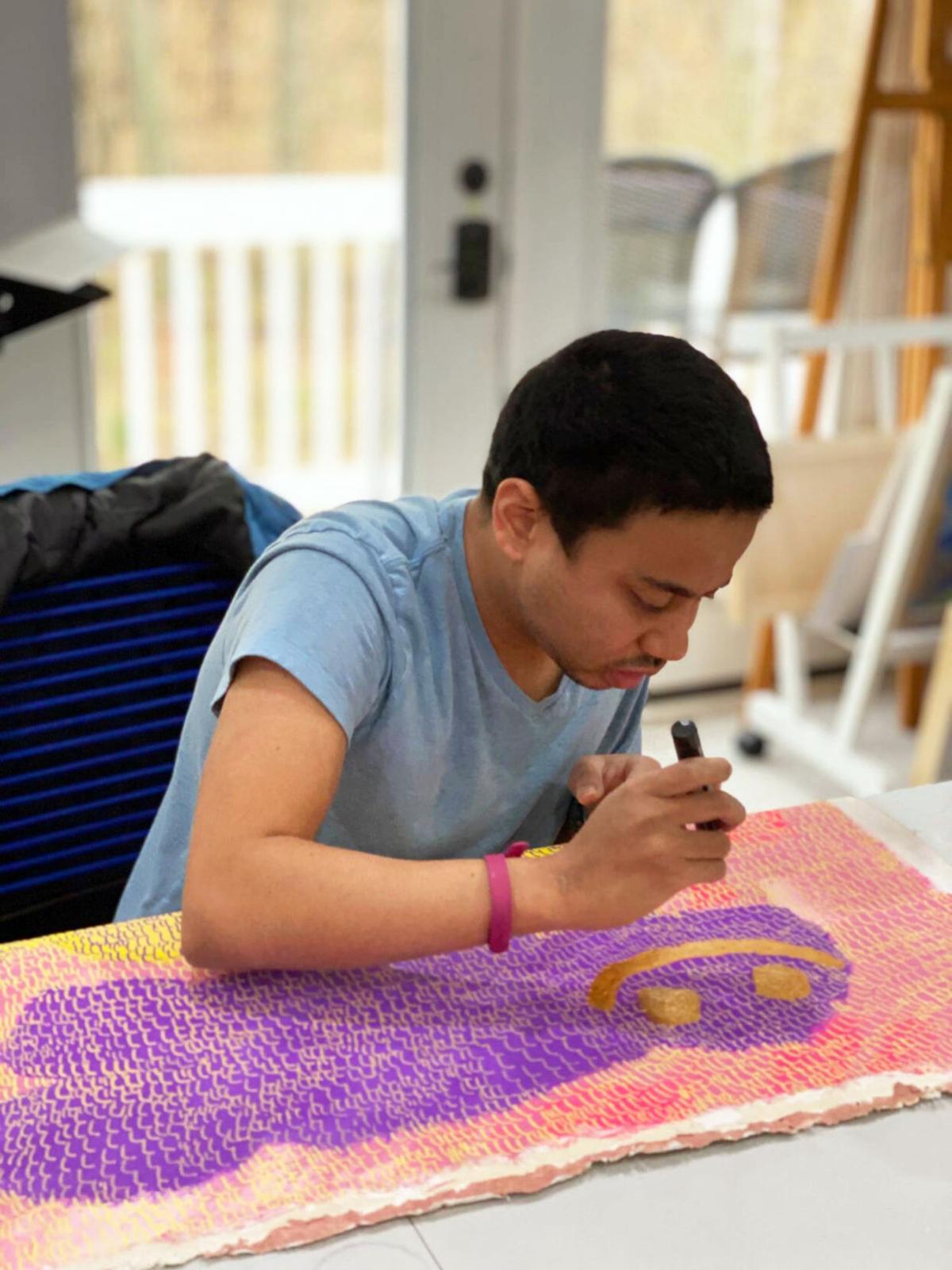 King works on one of his masterpieces. 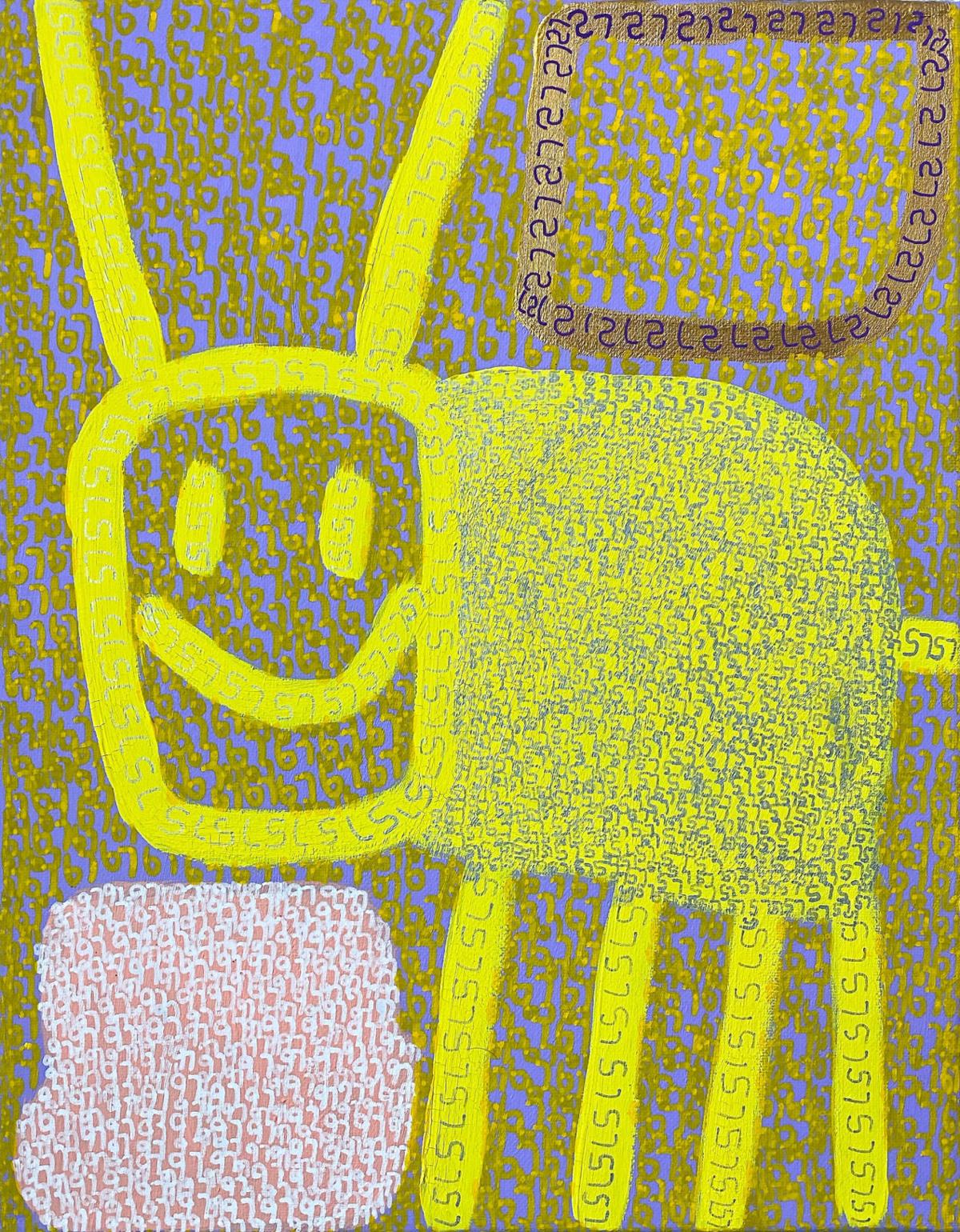 King’s painting is called, “The cow is having a good day because it is with the golden sun ‘27’.”

Artist King Nobuyoshi Godwin is pictured with one of his paintings of a snow rabbit king.

King’s painting, “The friends are doing great because they are together with the goats ‘7177’.”

King Nobuyoshi Godwin poses with one of his paintings.

One of King's sculptures.

Artist King Nobuyoshi Godwin is pictured with his art displayed at Meredith College.

King works on one of his masterpieces.

King’s painting is called, “The cow is having a good day because it is with the golden sun ‘27’.”

While working as a social worker, Price said it was difficult finding information and resources to educate foster families about autism. She retired as a social worker in August after 30 years, starting out in Child Support, then transferring to Foster Care and Children’s Services.

“Sometimes, the children we took into custody, the parents didn’t even know they had autism,” Price said.

She remembers a sibling group that came into care with the oldest child really acting out. The parent complained about how he wouldn’t sit still during church service.

“When we tried to find out what was wrong, it was difficult because the resources in Halifax County were so limited,” she said. “The school system assisted us some, but when I tried to get resources to come and educate the foster families, that is when we ran into a stumbling block.”

She said one agency came and gave them awareness about how to recognize autism, without training how to care for children with autism.

“Lots of families were feeling overwhelmed,” Price said. “If they agree to take children and our agency didn’t know if they were autistic, how could we get them to take the child? That is just an example. If we were to have more children to come into care exhibiting some of these same symptoms and we had such a difficult time diagnosing this child, how can we convince them, ‘It’s OK, give this child a try.’

Price said if the families knew the child was autistic, they said, ‘I can’t handle that.’

“As a social worker I felt I should be able to help them tap into resources to assist them in caring for a child with autism. If a child was diabetic, we would teach them how to care for a child with diabetes. It is only fair to give them some information about autism.”

Because her nephew King Nobuyoshi Godwin is autistic, Price would call her brother and sister-in-law Thomas Taylor Jr. and Yuko Taylor of the Raleigh area, and ask them questions. The programs they suggested were not in the county, Price said.

“I would bring it to our team at work and several of the social workers started asking other agencies we work through if they had people who could come and talk with our foster care to educate us more,” she said. “That’s when we really started having the other agency contact the foster parents and give them more coping skills and how to care for an autistic child.”

Price said her nephew, King, is an amazing young man who is an artist.

“He is also doing some other amazing things,” she said.

According to Thomas, one of King’s activities is swimming twice a week as a member of the Raleigh Racers Special Olympics swim team. King has someone working with him each day.

“Raleigh has been really great assisting him and my wife and I with some of the things he needs regarding schooling and helping him develop with speech therapy, physical therapy and thriving as a person,” Thomas said. “Some of the things we may take for granted he sometimes needs some assistance with, although he is very independent and just an amazing person.”

Thomas said they converted the two-car garage into a utility apartment. King, who is 29, lives in that space which is connected to the house, but still offers him a singular living space with his own kitchen, bathroom, laundry room and bedroom.

Although he has a full vocabulary, Thomas said King is not very verbal. Price’s older sister, Lynn Taylor Sawyer, who is a hearing impaired instructor, teaches King sign language.

“She has been teaching him since the pandemic, FaceTime and online,” Price said. “She said he is doing well with it. I am amazed at him.”

“This is a big deal,” Thomas said. “I don’t think there were any special indicators for someone with special needs. There were nominations for people still in their 20s who have been doing great things in Raleigh. He was chosen as an artist.”

Part of the article reads, ”As a leader in the arts community, King’s success is a triumph against all odds. Living with a disability, King was determined not to get stuck in a career selected for him — choosing to pursue art eight years ago. Since then, he has garnered commercial and critical success.”

The arts are in the family, as Thomas is a musician, playing drums and percussion, and is also a professor at N.C. Central University and the University of N.C. at Greensboro, teaching music appreciation, including such classes as percussion, jazz, drum set and hip-hop music and conducting percussion ensemble. Yuko is also an artist from Japan. Thomas, Yuko, King and King’s younger brother, Malik, 28, who is a clock smith, occasionally go to Japan visiting Yuko’s family.

“When I go back, sometimes I play with some of the Japanese or American artists touring in Japan,” Thomas said. “It has been a lot of fun to experience that, as well as performing and teaching in other countries around the world.”

As for autism, Thomas said there have always been challenges.

“One of the more important things is finding more stakeholders — people who truly invest and give opportunities,” Thomas said. “Although we have had a lot of assistance, many times we have had to become our own trailblazers because nobody had the answers we were looking for or nobody had done it, or if they had done it we couldn’t find someone to help us understand the path we needed to take. Our lives and King’s life have been only easier from the perspective of ‘OK, this is the question we have, can we get an answer directly?’ That didn’t always happen and it continues not to happen.”

When King was 21, the career as a painter and artist was not among the available options of manual labor typically open to folks with special needs, Thomas said.

“While I am not putting those jobs down, they were limited and did not allow his personality and the area he thrives in to be exposed,” he said. “A lot of people are able to choose a profession they are passionate about and can have some success, but I didn’t feel like those avenues are open for special needs people. A lot of times I feel that some people may push those people in a certain corner so the options they have are limited. I think they are starting to grow and expand more now, but maybe there could be more opportunities available to people.”

Through Yuko’s art, she has been very integral in helping King get some of the visibility that he has received, Thomas said. His success is her success.

“She has been the person who does the difficult leg work that has to happen so people can see the amazing art King does,” Thomas said. “She has been really amazing to make that happen, even finding support staff that can help complete all the tasks she does for King is difficult to find, as well as expensive.

“To find someone who understands his multidisciplinary skills as a painter, an artist as well as an athlete — is always difficult. On some level, it is almost like we need three or four people to assist him in all his activities, plus a marketing person, a business manager who can run the business of King’s art, but Yuko is doing all of that right now. I can’t say enough about how amazing she is to help King have the visibility he has while doing her own art and promoting it. King is growing even more successful.”

One of King’s paintings was acquired by the Gregg Museum of Art & Design at NC State as part of its permanent collection; he also has many pieces for sale in the North Carolina Museum of Art gallery store; and he has a book, “The Artist is Having a Very Good Day,” available at kinggodwin.com.

King also has a neurological condition, synesthesia. Synesthetes can often see music as colors; taste textures when they eat foods; and colors and numbers have emotions and feelings. Specific numbers have specific feelings for King, and specific colors have feelings and emotions, often conveyed in the titles of his art.

“The titles are some of the most fun things to experience, because it helps you understand literally how he was feeling and how clever and funny and intelligent he is,” Thomas said. “He is an amazing guy, he is really, really funny. He has always been a magnet. We would go somewhere and people would stop and say, 'Hi King, how are you?’ And we would be like, ‘Who is this person?’ And he would say, ‘Oh that is so-and-so from school.’ He was like a little celebrity way before he was an artist. He has done so many great things, I just can’t keep up with him anymore.”

Thomas said anyone who has autism or special needs has skills and abilities more than they are given credit.

“Allow that person to show their stuff, because they can do a lot and many times we may stop them from doing things — we as a parent, as a family member, as just people — sometimes we may just help someone when we see them because we assume things and we know what assuming does. Take a moment to look at King’s artwork and not only see the amazing wonder of him, but also see things that resonates with you. A lot of his art shows you who you are, not just who he is.”

Price said when King and Malik were younger, they read the dictionary.

“They like to learn new words and he can also speak Japanese,” she said. “King is just amazing, he inspired me to encourage my foster parents — just because children are labeled autistic, doesn’t mean they cannot learn, they cannot comprehend. If you meet King in person, you would be in awe of this young man. He is a very adorable young man and I’m glad he is one that has not allowed his disability to keep him back. More people who are labeled autistic need to be encouraged to do all they can, and we as a public need to see them in a different light.”

For information and resources, visit autismsociety-nc.org. A video of the Gregg Museum acquiring King’s artwork is available at youtu.be/Om5XSWxIHjw; his art is on display at the BelAir Center in Rocky Mount; and at King Nobuyoshi Godwin Art Facebook.