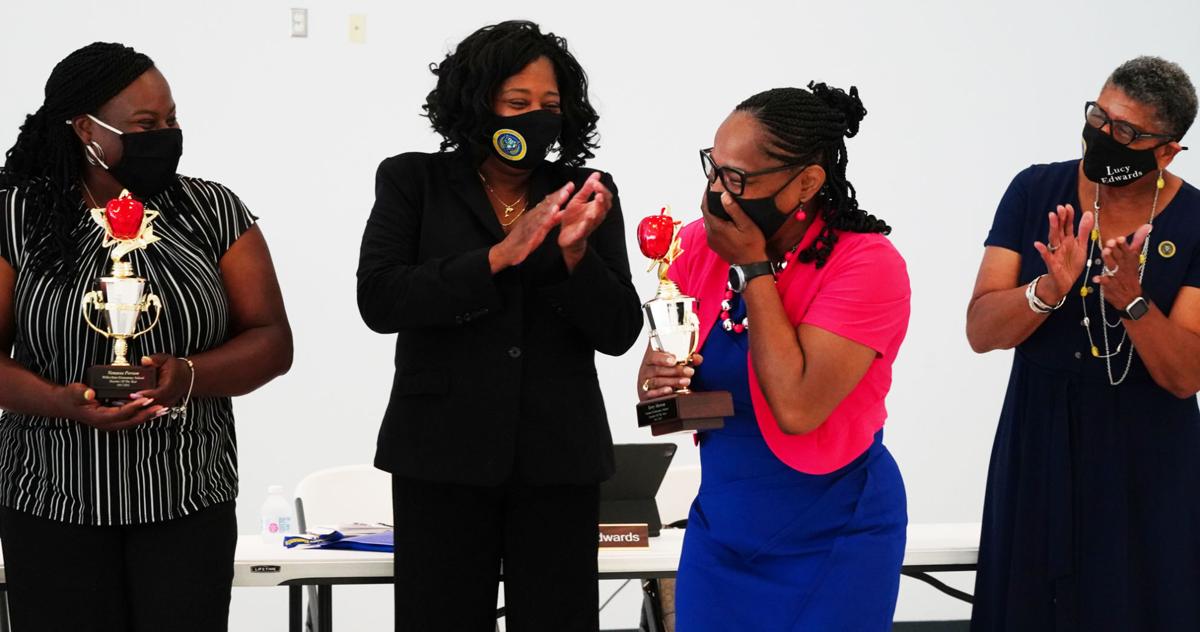 Terry Morton of Gaston Elementary School, reacting in surprise, was selected as Northampton County Schools’ ”Teacher of the Year” Tuesday night during a Board of Education meeting.

Board of Education member Tony Burnette, left, and Barbara Stephenson of the Northampton County Schools gave remarks during the regular board meeting.

Retiring staff members of the Northampton County Schools were recognized for their service to the school system.

Teachers were recognized during a regular Northampton County Schools board meeting. 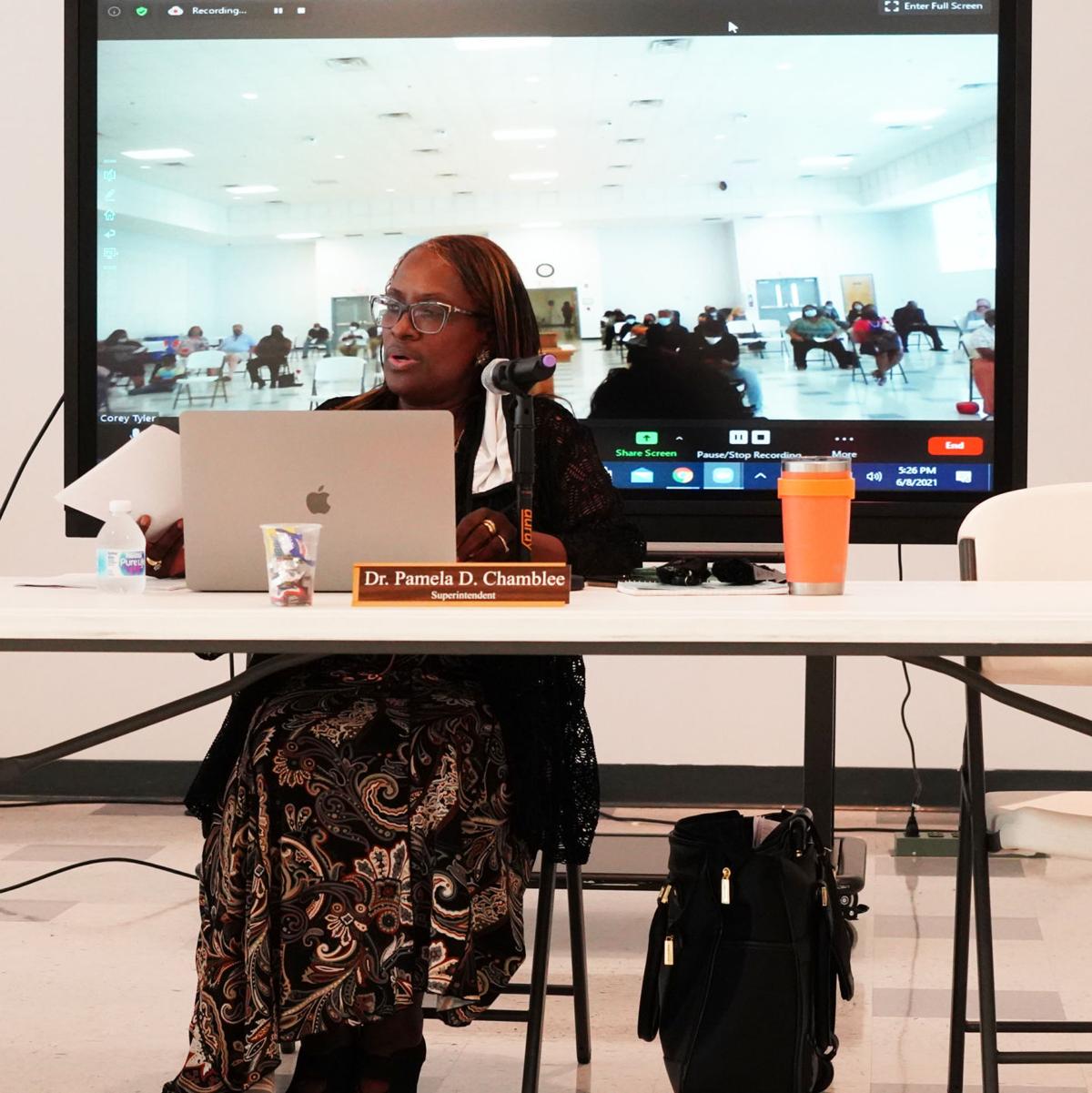 Superintendent Pamela Chamblee of Northampton County Schools provided remarks during a regular board meeting on Tuesday.

Terry Morton of Gaston Elementary School, reacting in surprise, was selected as Northampton County Schools’ ”Teacher of the Year” Tuesday night during a Board of Education meeting.

Board of Education member Tony Burnette, left, and Barbara Stephenson of the Northampton County Schools gave remarks during the regular board meeting.

Retiring staff members of the Northampton County Schools were recognized for their service to the school system.

Teachers were recognized during a regular Northampton County Schools board meeting.

Superintendent Pamela Chamblee of Northampton County Schools provided remarks during a regular board meeting on Tuesday.

JACKSON — The Northampton County Schools Board of Education voted 5-1 to request a $100 or $200 stipend raise during a regular board meeting on Tuesday.

The meeting was held inside the Northampton County Cultural and Wellness Center and virtually.

Board Member Tony Burnette cast the dissenting vote against the proposal motioned by Vice Chairwoman Marjorie Edwards and seconded by Barbara Stephenson. Burnette said he made his voice known in years that he is against such a raise.

“I would do this absolutely for nothing,” he told board members. “That our staff is sitting out here right in front of us, and I cannot with good conscious sit here and vote on something that should be going to our staff.”

Burnette clarified that he had no ill-will toward any board member, but said he can not endorse the decision.

“I just don’t feel that Northampton county Schools is in a position to be giving board members raises,” he said.

Stephenson asked if the Northampton County’s budget from the commissioners is budgeted with stipends for the board.

Chairwoman Rhonda Taylor said it is in the county budget and most boards in the county do receive stipends. Taylor said the amount may increase in accordance to position, but the NCS Board of Education did request an increase of $200 but the commissioners offered $100.

Board members mentioned over the past year they have had to pay for internet for Zoom meetings, use their own transportation and stay late for meetings as a reason for the raise.

Burnette said he wanted to go on record. He said if the Northampton County commissioners approve a raise the NCS Board of Education will get $850 monthly.

“Right now, the school board is getting $650, and that’s higher than any other school board around here,” he said. “I submit to you that our taxpayers didn’t elect us to give us raises. They elected us to work, and I submit to you that we are setting a bad precedent because we’re sending the message out that if you want to run for office that you’re running for monetary gain, and you’re not running because you care.”

As of June 9, Roanoke Rapids Graded School District Board of Trustees receive $200 and chair $250; Weldon City Schools board members receive $350, and the chair $400.

Stephenson said she begged to differ that any of the board members ran for their position for a stipend.

“As a matter of fact, some probably didn’t even know they were going to get a stipend, but they joined the board,” she said. “So I think that is incorrect and if the commissioners can give themselves increases and we give the superintendent and staff members increases, I don’t see a problem with asking.”

Burnette interjected and said to give the money to the employees.

Taylor said that she could only speak for herself as she did not know she was going to get a stipend until after her first meeting.

Burnette interjected again and said, give it to the employees.

Taylor asked to be allowed to finish her comments. She said she ran because she had two children attending Northampton County Schools and was dissatisfied with how the school system was performing.

“I wanted to make a difference,” she said. “I’ve been on this board 12 years. If I run for reelection, if I’m elected, I’m fine. If I’m not elected, then it’s not in God’s plan, but I want to continue to do what I have done from when my children were in school because now I have grandchildren getting ready to come to this school.”

Taylor explained she wants the school district to flourish and it is her plan for the superintendent and staff to accomplish that.

“Because I believe in our people,” she said.

Another reason for running was there are individuals on the board that have children who attend private and charter schools.

“I was totally against it, but guess what, I still as a board member, fight for those staff members to receive what they need to live in today’s society and that is what I do,” she said. “That is the reason I am here. That is my mission — to support our staff and to support our students and I am going to continue to do so as long as I’m on this board.”

The board had no further discussion as the request will go before the county commission.

In other news, the board members held another vote to elect a candidate for the vacant board seat.

“I think it can apply to this,” she said. “We each know how we got here and we want to make sure we do the right thing.”

The quote she read: “There comes a time when one must take a position that is neither safe, nor politic, nor popular, but he must take it because his conscience tells him it is right.”

Stephenson asked that board members to keep in mind how all of them became elected.

“Let’s keep in mind the process — the true process — what we went through to be a part of this board,” she said.

A candidate must receive a majority of four votes out of the six board members.

Colin Shive, filling in as board attorney for Rod Malone, presided over the tallying of votes.

Stephenson appeared frustrated and wondered if the board needed to vote each month until a candidate was selected.

Chives said the statute requires the seat for an unexpired term of a member needs to be filled.

Stephenson said she wants to do things fair and remarked on how only two of the candidates running for the vacant seat ran in the previous election for the same position last year.

“It’s nothing personal. It’s not because I like Mr. Williams or I like Ms. Simmons or dislike Reverend Williams. It’s because the people spoke — 1,800 people must have thought he was a fit for this board. Over 300 people must have thought that Ms. Simmons may have been a fit for this board. Let’s take those things into consideration and let’s do what’s right.”

Another vote will be placed on the next board meeting’s agenda.

The meeting continued and another action item was brought up to consolidate Gaston Elementary and Gaston Middle schools.

A public hearing was opened to which nobody made any comments on the restructuring to consolidate the schools into a grade 1-8 school on the campus of Gaston Middle, which will now be named Gaston STEM Leadership Academy.

“We feel we have met the statutory requirement as we looked at restructuring,” Assitant Superintendent Kelvin Edwards said.

Marjorie motioned, and Burnette seconded to approve the consolidation. The board unanimously approved the item.

In other news, the board was presented with approving the opening of the Northampton Virtual School.

Executive Director Geneva Riddick-Faulkner of Curriculum & Instruction presented the item to the board.

Taylor asked if students who are taking virtual classes will be able to participate in athletic programs as well as other opportunities.

Riddick-Faulkner said students will have full access to sports.

Board member Lucy Edwards clarified that virtual school will continue to be a part of school enrollment.

Marjorie asked if student grades will be monitored when they are participating in virtual learning.

Riddick-Faulkner said her staff has communicated with parents within the first month to make aware how often children were checking in to their classes.

Also, during the meeting, it was announced Kelvin would be leaving his position as assistant superintendent to take on his role as superintendent at Greensville County Public Schools in Emporia, Virginia.

Sliding into the assistant superintendent’s position will be Director Mark Barfield of Student Services & Public Affairs. Barfield will begin his position on July 1.

“I am most humble and appreciative to serve as the assistant superintendent of human resources and operations,” he said. “I will continue to serve the students, parents, staff and community with dignity and respect. I am most grateful to [Superintendent] Dr. [Pamela] Chamblee and the board of education for affording me this opportunity to continue to help change the lives of children.”