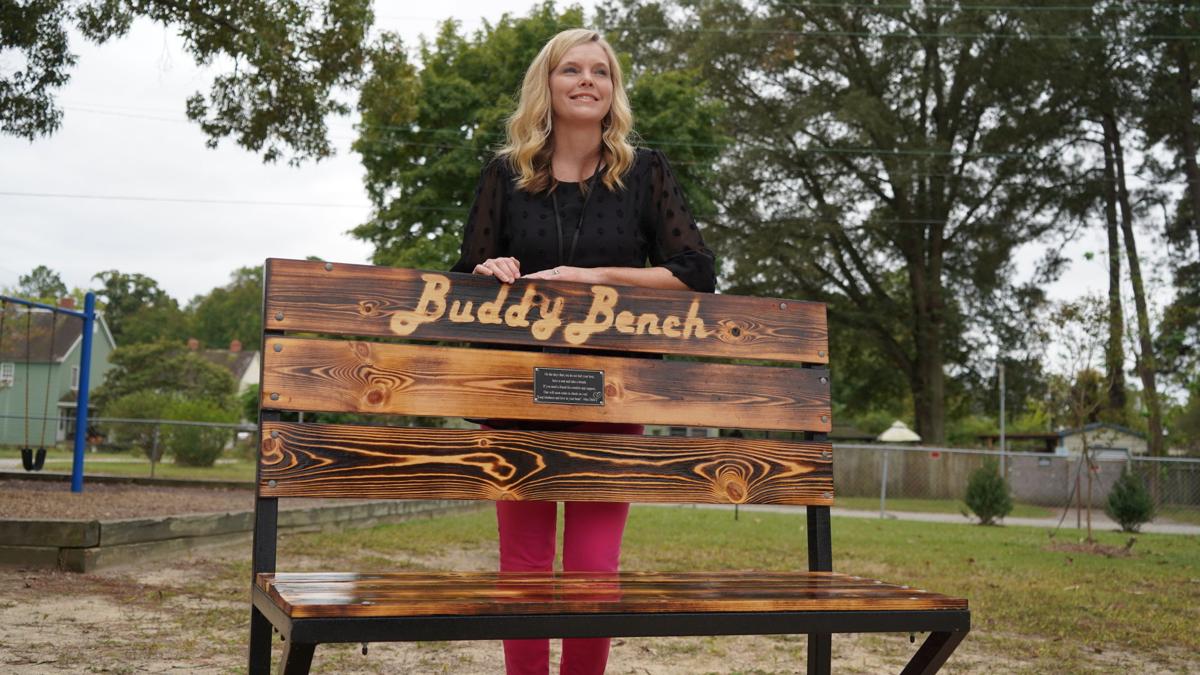 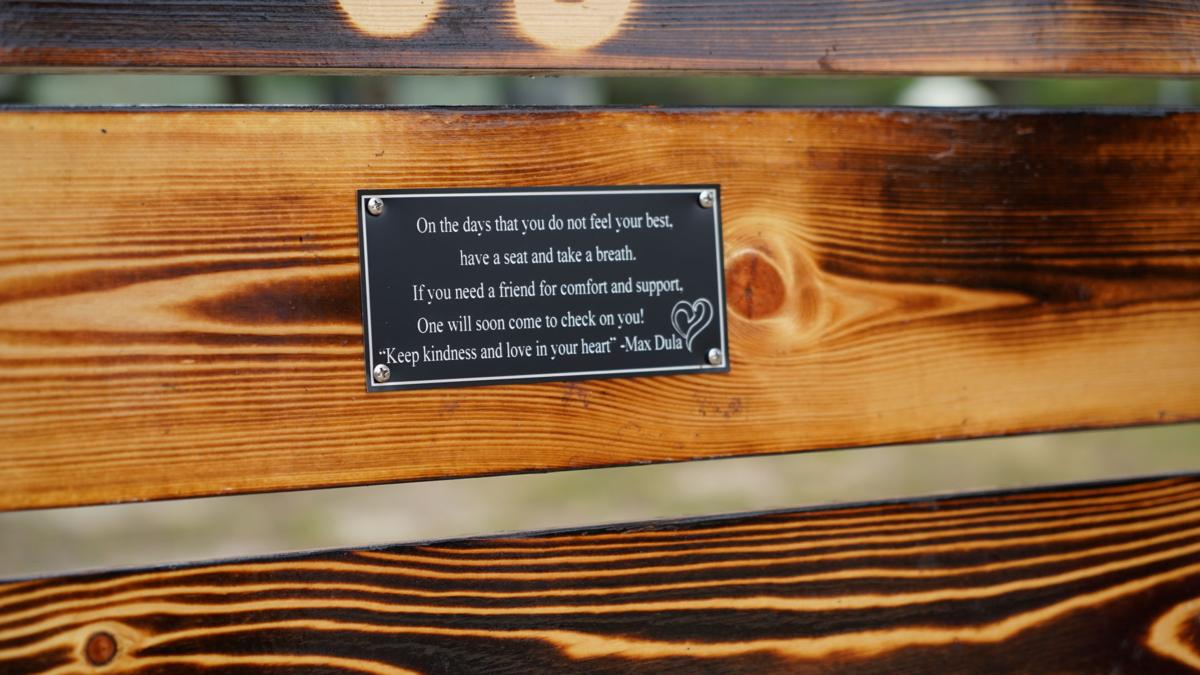 A plaque is placed on every “Buddy Bench” that has a quote from Max Dula to his mother. 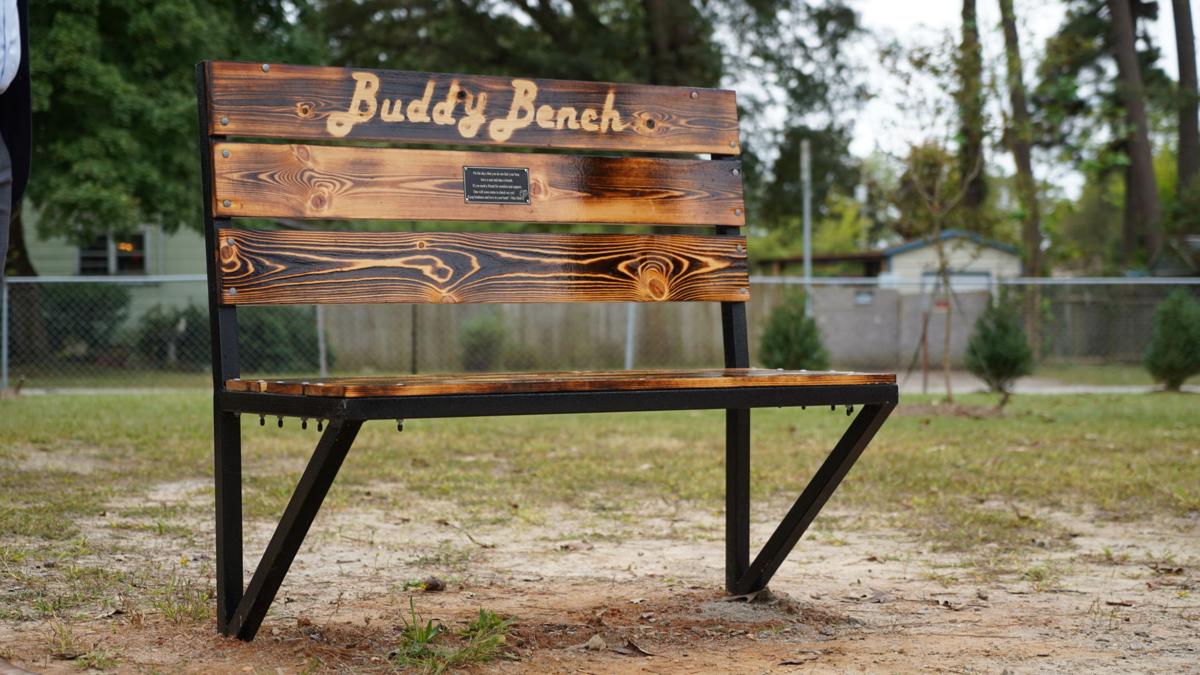 The “Buddy Bench” was an idea to help the youth.

A plaque is placed on every “Buddy Bench” that has a quote from Max Dula to his mother.

The “Buddy Bench” was an idea to help the youth.

ROANOKE RAPIDS — “Buddy Benches” were brought to several schools as a way to remember Max Dula and to offer a way for children to talk about emotional issues.

Project leader Amy Parker, a teacher at Clara Hearne Pre-K Center, provided background on how the 21 benches made for schools across Halifax, Northampton and Nash counties came about. Parker said she was talking to a close friend one day, who lives in Rocky Mount, who had lost her son, Max Dula, to suicide and remarked on seeing through social media playgrounds in other states having “Buddy Benches” and wanted one in memory of her son.

“She was just basically in conversation saying, you know, I wonder how I would do this,” she said. “Because looking online, the benches were very expensive.”

During their conversation, Parker said the benches would be beneficial on all of the playgrounds and not just one bench but accessed by every school. She said she began thinking about how to bring the idea to life and cover the costs of the project. That’s when Parker said she reached out to Luke Clements, owner of Clements Mechanical Inc., and told him about the idea of the “Buddy Bench.”

“I said basically I want you to tell me what it would cost to do benches for some schools — I didn’t specify how many,” she said.

Parker said Clements immediately responded, asking how many benches were needed and that they would be donated free of charge. She said she began sending notices out to superintendents in the area, who all accepted the proposal “graciously.” Parker said the benches have been made and spoken for while schools prepare to receive them.

The bench frame is made out of metal bars with wood planks making up the seat and back piece. On the top plank of the back piece is “Buddy Bench,” and below it is a plaque from B&T Trophies, which Parker said another friend of hers, Rose Pait, who is part of a speech therapy company called Joyful Journey, made a donation toward the purchase of the plaque.

On the days that you do not feel your best, have a seat and take a breath. If you need a friend for comfort and support, One will soon come to check on you!

Parker said she asked the mother’s permission to use a quote her son wrote to her and put them on all benches.

At the bottom of the plaque, it read:

“Keep kindness and love in your heart.”

Parker said that she has always thought that something similar to the bench for the youth would be beneficial because of how important social and emotional skills are for connecting with others.

“Because we can teach you anything if you know how to socialize with others, and you have a good emotional state,” she said. “If you’re not functional with others and can’t communicate with them, and interact with them appropriately, it doesn’t matter if you know your ABCs — one, two threes, social and emotional is so important. It’s the most important foundational skill for early childhood education.”

Parker said she, her husband, Jarrett Parker, who also works at Clements Mechanical, and children place the benches typically on weekends, which the “Buddy Bench” at Clara Hearne was placed two weeks ago on a Sunday.

“And on Monday, of course, everyone that came out was like, ‘What is this? What’s this about?’ ” she said.

Parker said she took the children in small groups to the bench and gave them instructions and the background about it. She explained that a lot of social-emotional lessons are conducted in the classroom and told the children the bench is their safe place, just like the safe place inside the classroom.

Parker gave an example where the other day, a twin boy was out sick. His sister came over to the bench when everyone came out to the playground and sat, she said. Immediately, three friends noticed that she was not feeling her best, Parker said. Overhearing their conversation, she said the youngest child of the three asked the sister, “Are you not feeling your best? Can I help?”

Parker said the sister explained she was worried about her brother being sick.

“The students just caressed her, hugged her, told her that hopefully, he would feel better,” she said. “And within maybe 15 seconds, they were playing, got her back in that best state — she could be in her executive state, and she could play and move on about her day and not feel sad.”

Parker said she has heard from students and staff compliment and discuss the benefits of the “Buddy Bench” since it was placed.

“Like sometimes the teacher will come over and sit on it, and the students immediately gravitate to that teacher,” she said.

Interim Superintendent Julie Thompson of the Roanoke Rapids Graded School District said, “Mrs. Parker has done an amazing job coordinating the installation of these Buddy Benches in our district. As a district, we believe in creating an open environment to talk about mental health, which in turn empowers students to reach out to a trusted family member, teacher, or friend when needed.”

As for the donation of the benches, Parker said anybody who knows Clements knows what type of giving heart he has.

“He definitely had a good social-emotional upbringing,” she said. “We were very gracious — everyone that was involved. I mean the company [Clements Mechanical] really gets the credit because they did the hard work.”

The Herald reached out to Clements, who said, “We welcome any opportunity to get involved with the community, especially anything that has to do with kids. There are so many bad things going on in the world right now, and if we can help and shed some light on things, we’re more than happy to help.”