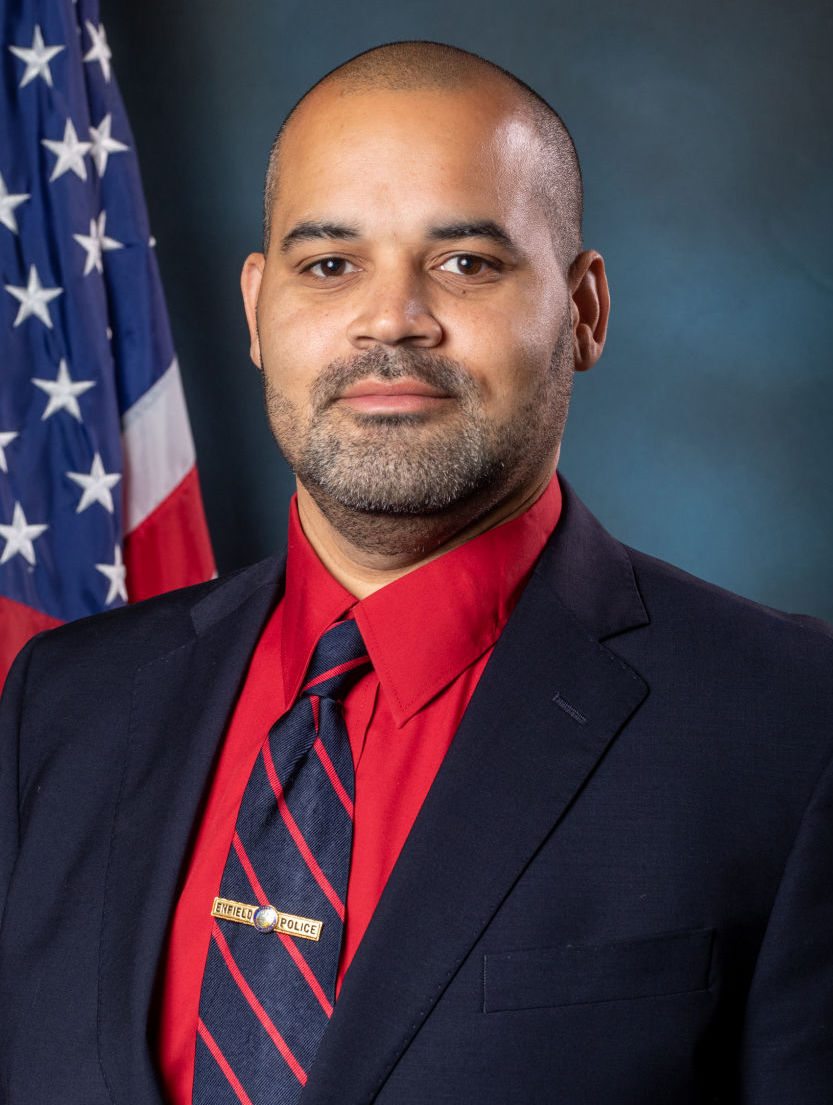 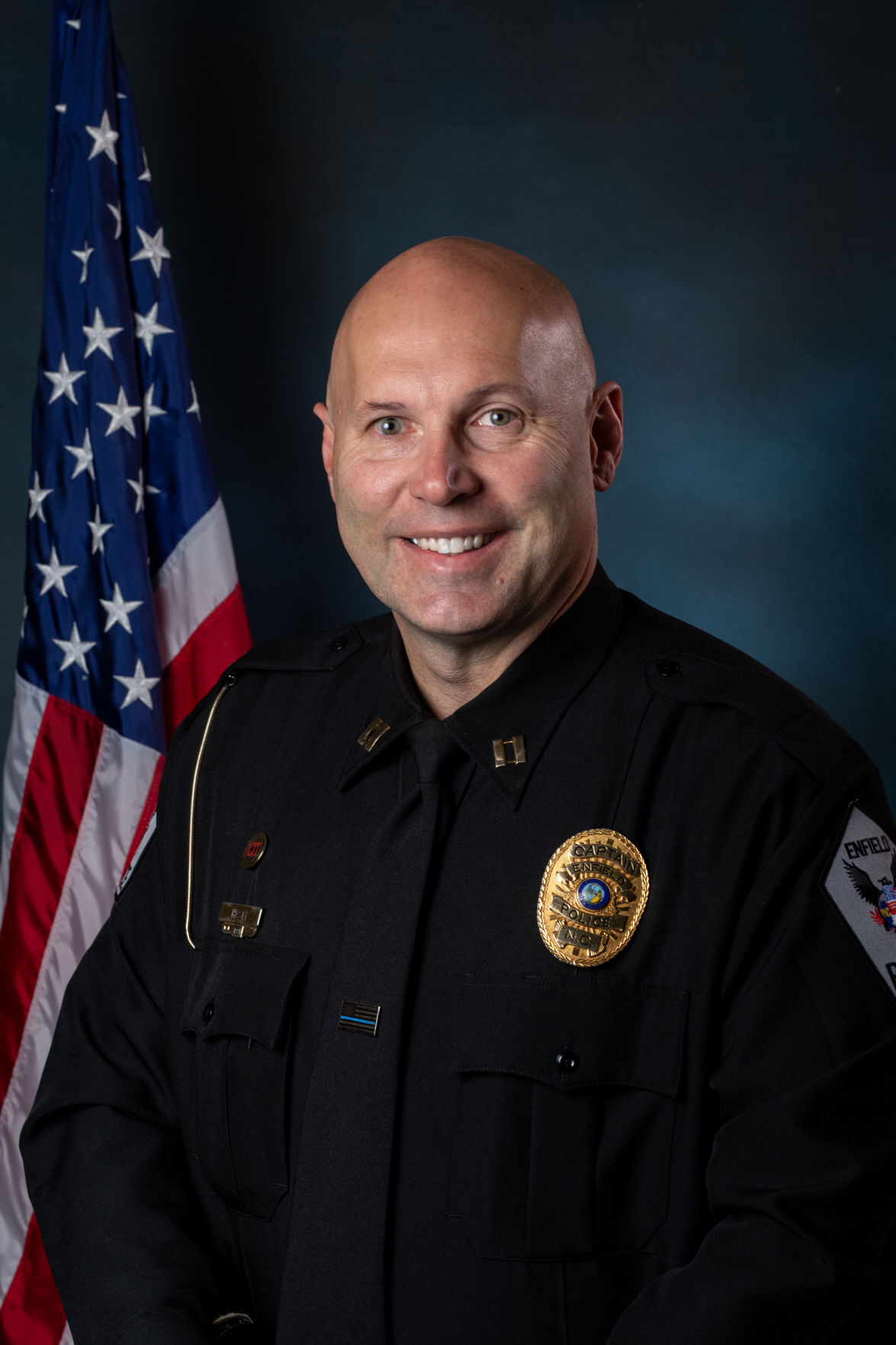 Capt. Chuck Hasty will take the chief position at the Enfield Police Department on Wednesday.

Capt. Chuck Hasty will take the chief position at the Enfield Police Department on Wednesday.

On Wednesday, Capt. Chuck Hasty will become Enfield Police chief as Tyree Davis transitions from the position to town administrator.

“I have full confidence that he will serve you well,” he said during the previous meeting. “He has a vast knowledge of municipal government. He has been a part of this community for quite some time and has served you all well. I feel confident leaving it in his hands.”

Davis served as the town’s chief of police since December of 2015, with over a decade of law enforcement experience under his belt. He also holds a diploma in Computer Technology, a Bachelor of Criminal Justice from Kaplan University, a Master of Public Administration from Capella University, a master certificate in Business Management and other experiences.

“Since taking over as chief, I have ensured that citizens and officers were held accountable for their actions,” Davis said in a press release. “As your chief, I have always been fair, firm and consistent. I made sure the decisions made were made based on the facts I had at the time. I never let politics, promises or the buddy system play a role when it came to the safety and security of my community or my officers.”

As Davis moves up, Hasty will take the helm as chief of the police department. Hasty was named chief with the Roanoke Rapids police in 2014 before resigning from the department at the beginning of 2019. He was later hired as captain with the Enfield police at the end of March in 2019 with more than 29 years of law enforcement experience. Hasty has a Bachelor of Science in Criminal Justice Administration from Columbia Southern University, an Advanced Law Enforcement Certificate from N.C. Criminal Justice Education & Training Standards Commission, a N.C. Sheriff’s Education & Training Standards Commission and a Certified Criminal Investigator’s Certificate from the N.C. Justice Academy.

Hasty said he is honored the Board of Commissioners chose him to lead the Enfield Police Department.

“I look forward to continuing the work Chief Tyree Davis has started here and moving forward with the community police efforts,” he said. “I look forward to working with him as he takes on his new role as the Town Manager [Administrator].”

In light of the recent promotions, the police department is tied to an ongoing investigation from the Halifax County Sheriff’s office after former Enfield Lt. Willie C. Murphy was arrested on Sept. 4 on 14 counts of embezzlement by local government employee, 18 counts of altering, destroying or stealing criminal evidence, 18 counts of willfully failing to discharge duties and four counts of obstructing justice. The charges came after the sheriff’s office began an investigation in July into an alleged second degree sexual exploitation of a minor child.

Read the article at bit.ly/2LvWBdJ.

In response to the incident, the Enfield Police Department’s evidence room underwent an audit by the Johnston County Sheriff’s Office. The JCSO submitted the findings to the HCSO but is unavailable as further investigation is pending on Murphy. Questions were sent for Davis to answer following the arrest of Murphy regarding the police department’s handling of evidence from the evidence room. However, there has been no reply to the questions submitted.

Also, a lawsuit filed on Sept. 25 by Daniel W. Jenkins is pending against Hasty, the City of Roanoke Rapids, RRPD and District Attorney Valerie Asbell.

“Right before Christmas, the federal court allowed all parties extensions of time to file their answers in this matter,” according to City of Roanoke Rapids Attorney Geoffrey P. Davis as of Monday. “The matter is still pending, and at this time, I cannot comment any further, given where we are in the litigation at this point.”

Hasty said he could not give comment on pending litigation or investigations at this time.

Tyree Davis, in a press release, said the police department changed from being 100% reactive to proactive where officers partnered with stakeholders to reduce criminal activity and solve crimes not only in Enfield but in other jurisdictions.

“This partnership helps us prevent, reduce and solve crime,” he said. “I will admit, as a department and the chief, we are not without flaws. Every day was not always sunshine and rainbows. We have had our good days and bad days. But no matter how the day was going, I have always made the decision that was best for the community and department. At Enfield PD, we are our community.”

Tyree Davis said he always pushed training and education with his staff.

“I believe a better-trained officer is a more confident and productive officer,” he said. “My friends, community and co-workers would always ask, what class are you taking now? You are the chief, what more could you want? Why do you need more training? I had no idea at the time our town administrator position would come available and I would have an opportunity to fill the position. However, as chief, I have always told those friends, community members and co-workers that you cannot wait until it is time to be ready to get ready. So, when the town administrator position became available, I was ready for the position.”

Tyree Davis said receiving the position is proof that teamwork, training, education, experience and integrity is important in Halifax County.

“Thank you to everyone that has worked with me at the Enfield Police Department. It does not matter for how long we worked together or the reason why we no longer work together. Each one of you taught me something and made me a better person, friend, manager, and supervisor. Your hard work and dedication to the community and department made it easier for me to be your chief. I know that we did not always see eye to eye, but we were able to sit down, talk things out and handled it like professionals. I have always told my staff my job was to build great leaders. I truly believe while building great leaders in you, you built a great leader in me and to that I say thank you.”