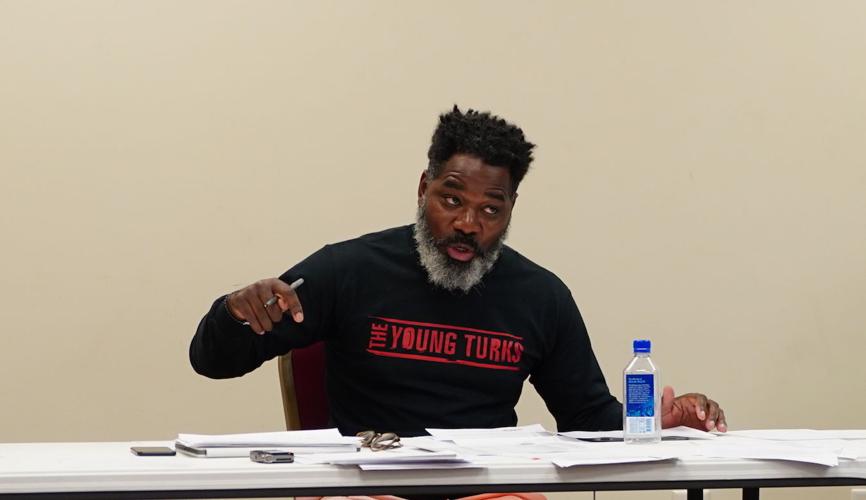 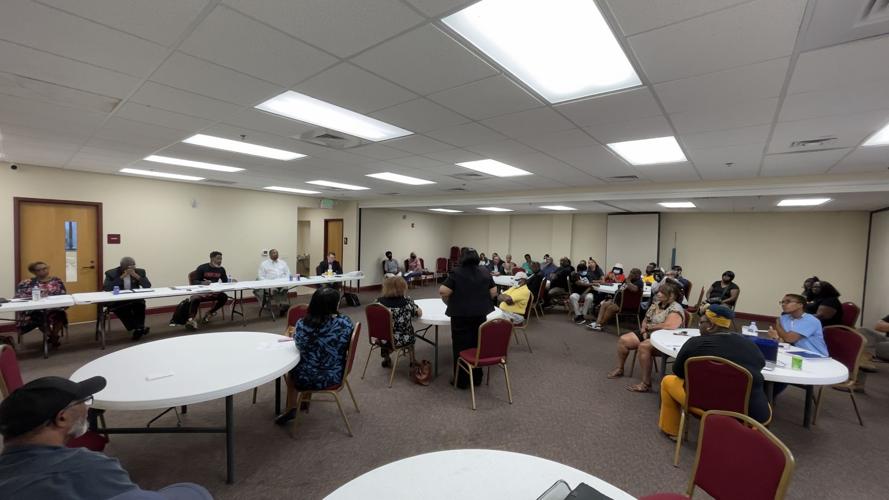 Pictured is one side of the room filled with people attending Enfield’s Monday regular board meeting. 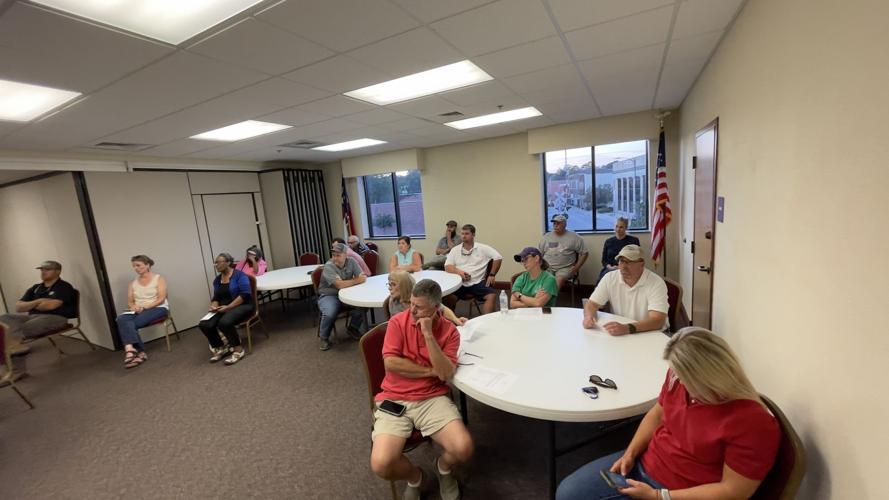 Pictured is a portion of the room where people attended Enfield’s regular board meeting on Monday. 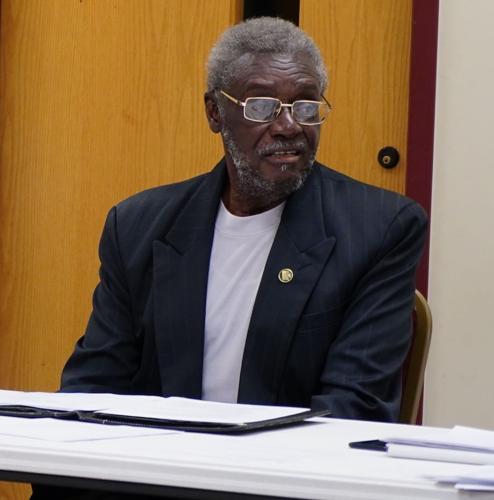 Pictured are Enfield residents during a regular board meeting on Monday.

Pictured is one side of the room filled with people attending Enfield’s Monday regular board meeting.

Pictured is a portion of the room where people attended Enfield’s regular board meeting on Monday.

Pictured are Enfield residents during a regular board meeting on Monday.

ENFIELD — The way policing is conducted in Enfield was an intermittent topic during a Board of Commissioners meeting on Monday, hinting at potentially doing away with the police department.

During the regular board meeting, the room was packed with people, where black residents sat on one side and white residents on another. It was not until the reading of the police report that the topic of policing the Town of Enfield came up. Enfield’s police chief and captain recently resigned, citing conflicts with the town’s governing body.

An excerpt from former chief James Ayers’ letter reads, “I can no longer work in the oppressive and hostile work environment that one of the town leaders has created, as a way to retaliate against me for reporting his questionable behavior to SBI for investigation. Then to negatively speak of me and question my character on social media for performing my job duties. This type of environment makes an already difficult situation almost impossible.”

On Aug. 22, Ayers, along with District 6 District Attorney Valerie Asbell, requested that the SBI investigate property damage to a veteran monument caused by Mayor Mondale Robinson the previous day. The town commissioners approved 4-1 on Aug. 15 to remove the monument in Randolph Park due to one side of the monument honoring Confederate veterans.

A week after the destruction of the monument, racial messages found on fliers appeared primarily along Martin Luther King Drive. The incident prompted Robinson to hold a press conference requesting Gov. Roy Cooper to declare a state of emergency in Enfield.

Continuing into Monday’s meeting, Mayor Robinson read the report for the month of August, but also took the opportunity to discuss the situation of the Enfield Police Department.

“I think a lot of the times what we do is we take incidents and we blow them up and make them what they’re not,” Robinson said. “So it’s important to deal in fact, as it pertains to what’s happening and what’s not happening. It is an absolute fact that we lost police officers over the last month. That is undeniable. It also should be said that Enfield is not the only small town in North Carolina that does not have adequate policing as it pertains to their local police department.

“This is a problem that we should be looking at differently anyway, considering that the police department takes up so much of our budget. And what happens is in small police departments, these agencies are usually strapped — cash strapped. They don’t have the equipment necessary. And also, they don’t ever have enough officers to provide a proper backup for officers, which creates another problem as it pertains to agency.”

Mayor Robinson gave an example and said 40% of Enfield’s police vehicles are inoperable.

“That is not a problem of a monument being removed, and then people leaving,” he said. “That is a problem with us not being able to afford proper equipment for our officers.”

Robinson said the vehicles that continue to be used should not be in service as some have more than 300,000 miles, and some shut off during a stop at a stoplight.

“So these are all problems that exist in our police — now small police department that we should rethink of what we are interested in as it pertains to investing in investigating,” he said. “Because that’s what police officers do. They investigate crimes, they don’t stop or prevent crimes. We should also be considering what our relationship looks like with the other agencies that have officers that can provide services to Enfield.”

Robinson said other municipalities have lowered police department expenses and claimed crime rates were reduced by going into a Memorandum of Understanding with other nearby agencies, counties and towns.

“So just to be clear, 40% of the towns in North Carolina do not have police departments, and they are still OK,” he claimed during the meeting. “This current state we find ourselves in may present us a wonderful opportunity to rethink what community policing looks like, and we get more eyes on the street to prevent crimes before they happen anyway, by hiring people from Enfield that are of Enfield that have wonderful intentions for our town and not political aspirations.”

Further into the meeting, an agenda item regarding the Halifax County Sheriff’s Office invoice pertaining to costs of deputies covering shifts in the Town of Enfield was discussed.

Mayor Robinson took the lead again and said the sheriff’s office is saying they have to pay deputies overtime to cover shifts in Enfield. He said there should be another way to negotiate and have a conversation on how to pay the office for the services. Robinson said Enfield should not be paying overtime rates for deputies that are in Enfield.

Commissioner and Mayor Pro Tem Bud Whitaker said citizens of Enfield are paying double taxes with the town and county taxes. Whitaker said, in his opinion, he does not agree with the county in paying three times for the services from the sheriff’s office.

“They have a right for their protection,” he said. “What do the county do for the Town of Enfield? That’s the question right there. Maybe some of the citizens can answer because I don’t know what they do for the town. It’s not right to pay double taxes and then have to pay them to come down here. They’re down here anyway. Playing games, so why not? I know because I’m out there — I know what they’re doing. It’s not right for the citizens to pay double taxes.”

Eventually, the elected officials went into a closed session meeting for personnel matters. During that time, most of the attendees left the room, with a very small group staying behind. The officials returned and resumed the open session meeting.

Robinson gave his mayor’s report and talked about the future of Enfield’s safety and security. He said the town does not have a fire department since the Enfield Volunteer Fire Department is an independent agency, eluding to the idea of not having a police department.

Editor’s note: For the sake of time and content, the Herald will follow up with other portions of the meeting this week.