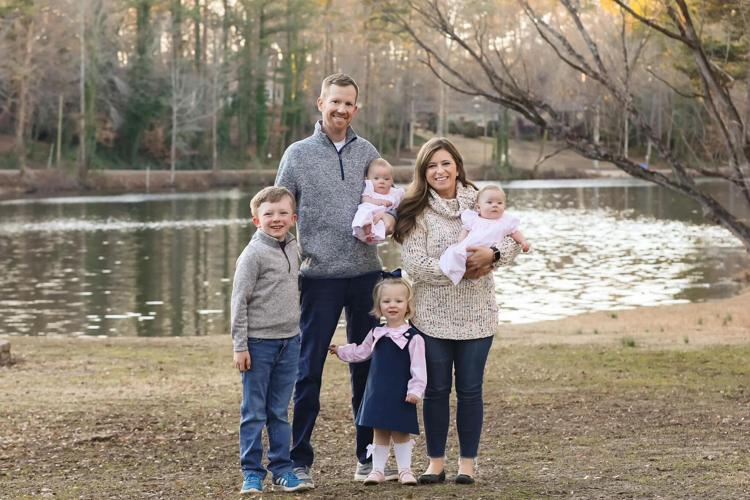 Pictured is the Goble family. 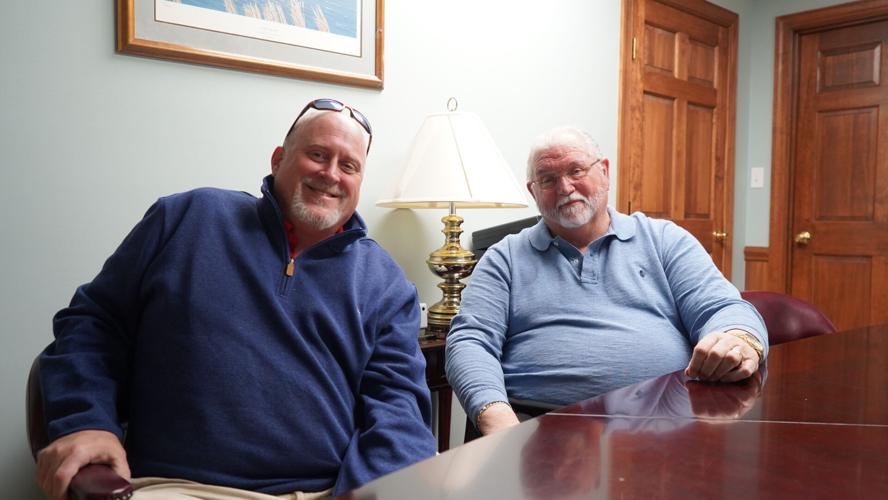 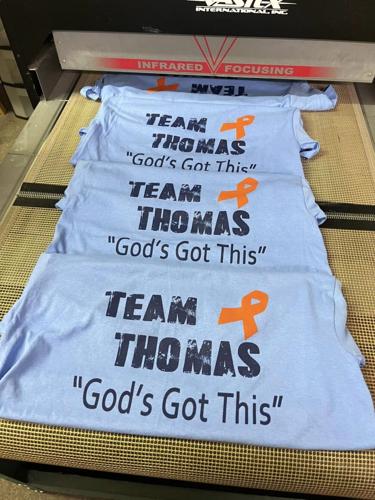 Pictured are printed T-shirts in support of the Goble family by Randy Wrenn. He is taking orders through Feb. 1.

Pictured is the Goble family.

Pictured are printed T-shirts in support of the Goble family by Randy Wrenn. He is taking orders through Feb. 1.

ROANOKE RAPIDS — A family received an outpour of support from the community after learning that one of its members is undergoing treatment for an illness.

Thomas Goble said it was around Thanksgiving that he was diagnosed with mono. But after enduring pain and dizziness, Goble checked himself into ECU Health North Hospital, where he stayed for five days. On Dec. 22, just before Christmas, he went to Duke Medical Center and underwent a bone marrow biopsy. The test confirmed Goble was diagnosed with acute lymphoblastic leukemia.

On Dec. 29, Goble revealed to the community his diagnosis and was undergoing month-long chemotherapy treatment at Duke and displayed faith in God and was fully committed to fighting.

On Monday, Goble said he has been home for nearly 10 days and will return to Duke for round two of the treatment. Thomas is married to Lindsey Goble and they have four children; 7-year-old James, 2-year-old Kate Stone and nearly 6-month-old twin girls Annie and Lizzie.

Thomas said his family is not too private about his illness, hoping that sharing their struggles will uplift others.

“Maybe this will help somebody else that may be going through this or will go through this in the future,” he said. “We’re not sheltering ourselves by any means.”

The news sparked community members to come together and raise funds to support the Goble family in their time of need.

Members of Thomas’s church, Rosemary United Methodist Church, Phil Hux and Ed Liverman began a fundraiser for the family where 200 Boston butts will be cooked on Feb. 9 at the church. Additionally, the butts will be rubbed down with Peedey Boy’s Rub and a bottle of Tim-Buck’s Barbecue Sauce will be included with each order.

Hux said he thought the fundraiser would be a good idea to help the Goble family but would not do it unless Liverman jumped on board to cook.

“I’ve eaten what he has cooked before, and it’s hard to beat that,” he said.

Hux said Liverman then did the next best thing and reached out to Scott Hall to help volunteer cooking.

“Scott Hall, compared to me, he’s a professional,” Liverman said. “He’s a great coach. And we cook a lot of things together.”

Liverman said the Gobles are part of their church family and a great pillar in the community, with Thomas working for the city as the supervisor for the Jo Story Senior Center and Lindsey working in the Roanoke Rapids Graded School District.

“She works with the school system, he works for the city, and they’re just fantastic people,” he said.

When asked what their reaction was to Thomas’s diagnosis, Liverman said the family has had it rough for a while.

“But they keep coming back with the most amazing faith in response to that,” he said. “They’re just like I said earlier, just fantastic people, and they deserve whatever our community can give back to them. That’s the way I look at it.”

Hux said they are a family of fighters.

“They fight to survive anything that’s been thought out, and they’ve had a lot thrown at them,” he said.

Hux said they started selling $45 tickets a week ago.

Hux and Liverman said the Methodist Men and Sunday School contributed money toward paying for the fundraiser.

Hux said some locals chipped in, and even individuals who are donating money without purchasing tickets, including a $200 check from the Optimist Club.

“We know it’s 100% plus, because people are sending extra money,” he said. “And when they are buying tickets, they say just keep the five and I had somebody give me $100 and said, just keep the change — that type of stuff. So it’s been amazing what happens.”

Hux said the funds go straight to the Goble family and believes it will be more than $9,000.

Liverman highlighted the positive response of the area to the cause.

“We live in a really different part of North Carolina, or the world or the country,” he said. “But we live in a pretty good place. Our community pulls together when it needs to. This has been a true testament.”

When it comes down to it, faith is an important factor for the Goble family.

Thomas said it was a shock when they found out about his cancer.

“Then you kind of process it,” he said. “Then Lindsey, my wife, is the one who always said, ‘You’ve got this, you’ve got this.’ And then once we started thinking about it, we were like, no, it’s not up to me. It’s up to God. So now, what we say all the time is God’s got this and we are just giving it up to Him. Our faith does play a lot in this, and I felt the prayers and the support from the people all around the state and all around the country who have sent me messages saying they’re praying for me, and I truly have felt their prayers. And it’s really strengthened me.”

Another community member who began a fundraiser for Thomas is Randy Wrenn, owner of Wrenn Sports, Screen Printing and Embroidery, who is printing T-shirts for $10 each with Team Thomas “God’s Got This” to raise money for the family. Wrenn said Thomas, at one point, was the supervisor for the T.J. Davis Recreation Center and knew him working through sports.

“So when I saw he was sick, I wanted to help show support for him and help his family with expenses,” he said. “So I came up with a shirt design and communicated with his wife. Being a UNC fan, I knew they had to be Carolina Blue. I know how tough it is back and forth to Duke Hospital, and gas, food and hotels can add up. Seeing friends, family and even strangers with a T-shirt supporting you in this fight gives you strength.”

Wrenn said employees from the city, patrons and friends have reached out to him for orders. He said he is taking orders up until Feb. 1 and his shop is located at 10 East 11th St., and is open from 10 a.m. to 3 p.m. Monday through Friday.

“As a local resident and business owner, I enjoy supporting each other,” he said. “I have been on the supported side before, and it makes your heart feel good.”

Thomas said the support has been overwhelming.

“The best thing about small communities like this, and what we really love about Roanoke Rapids and this whole area is just how, when stuff like this happens, everybody bands together,” he said. “You don’t really realize that until you’re on the other side of it. But it’s not just me, it’s anytime some kind of an event happens or something happens to someone, people are willing just to step up, and it’s overwhelming to us. We can’t thank those people enough for organizing this. They don’t have to do this. They’re doing it on their own time and their own money and their own energy doing all that.”

Thomas wanted to thank Hux, Liverman, Hall, Wrenn and everyone who has supported his family.

“So I really want to thank Randy and Phil and Scott, and and all those guys for really stepped up and organizing these things for us. Because that’s really gonna help us out a lot.”

He also mentioned that there is a blood drive March 3 at Rosemary United Baptist Church in honor of him.