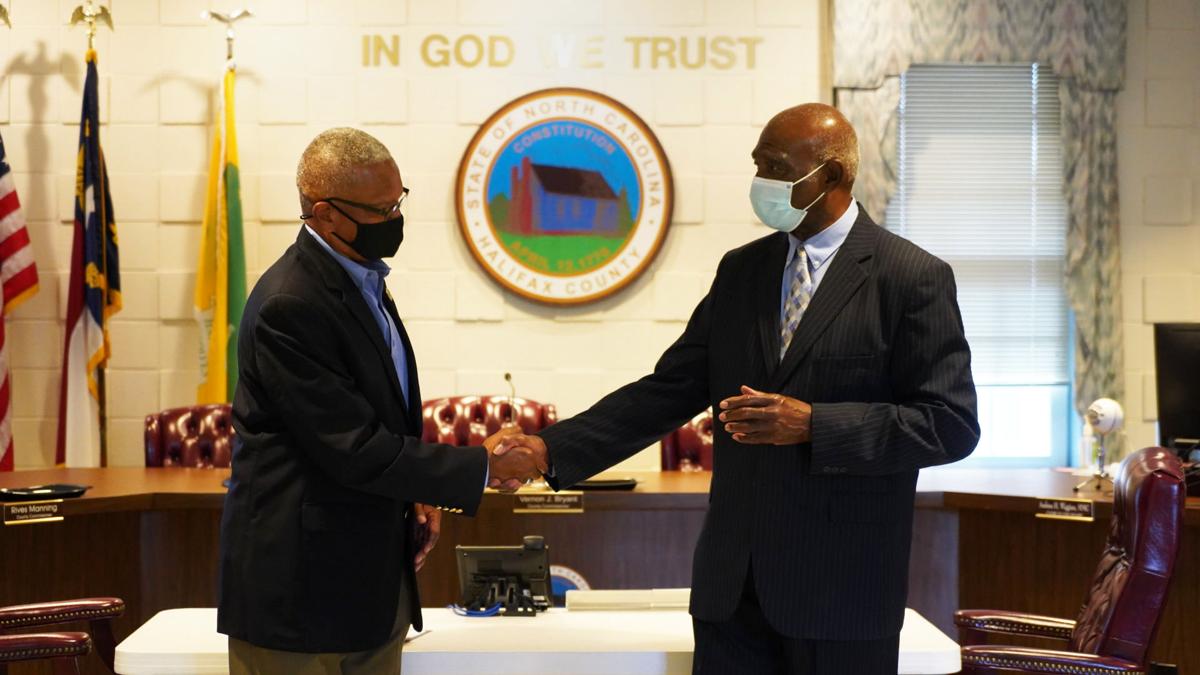 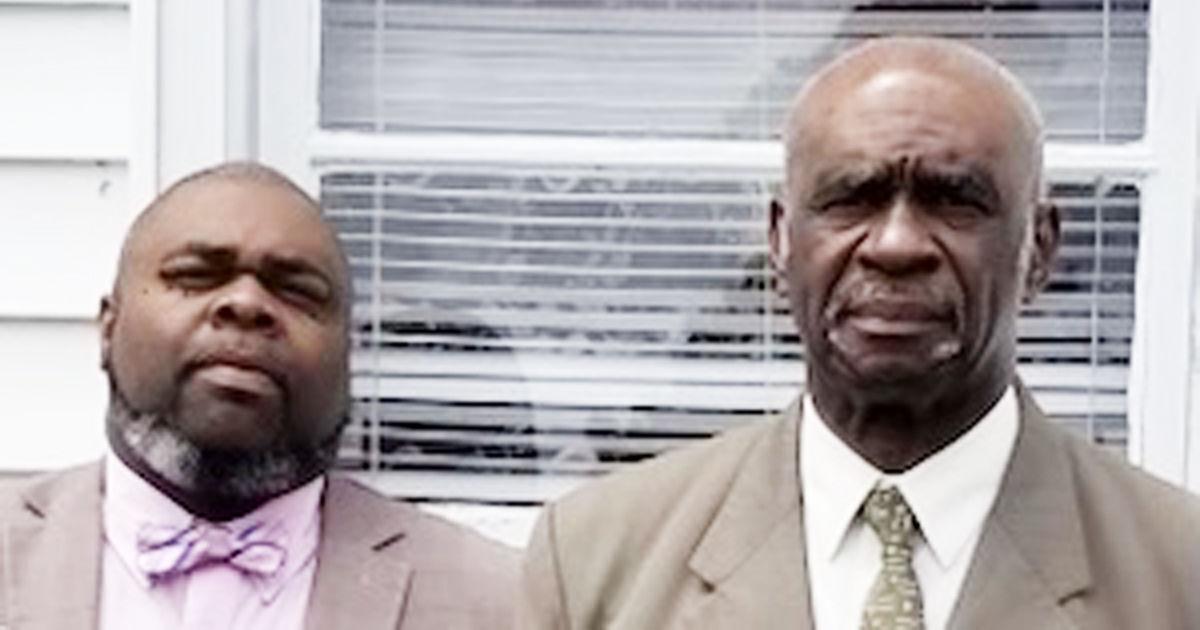 Pictured are the late Marcelle Smith, left, with his father, John Smith. 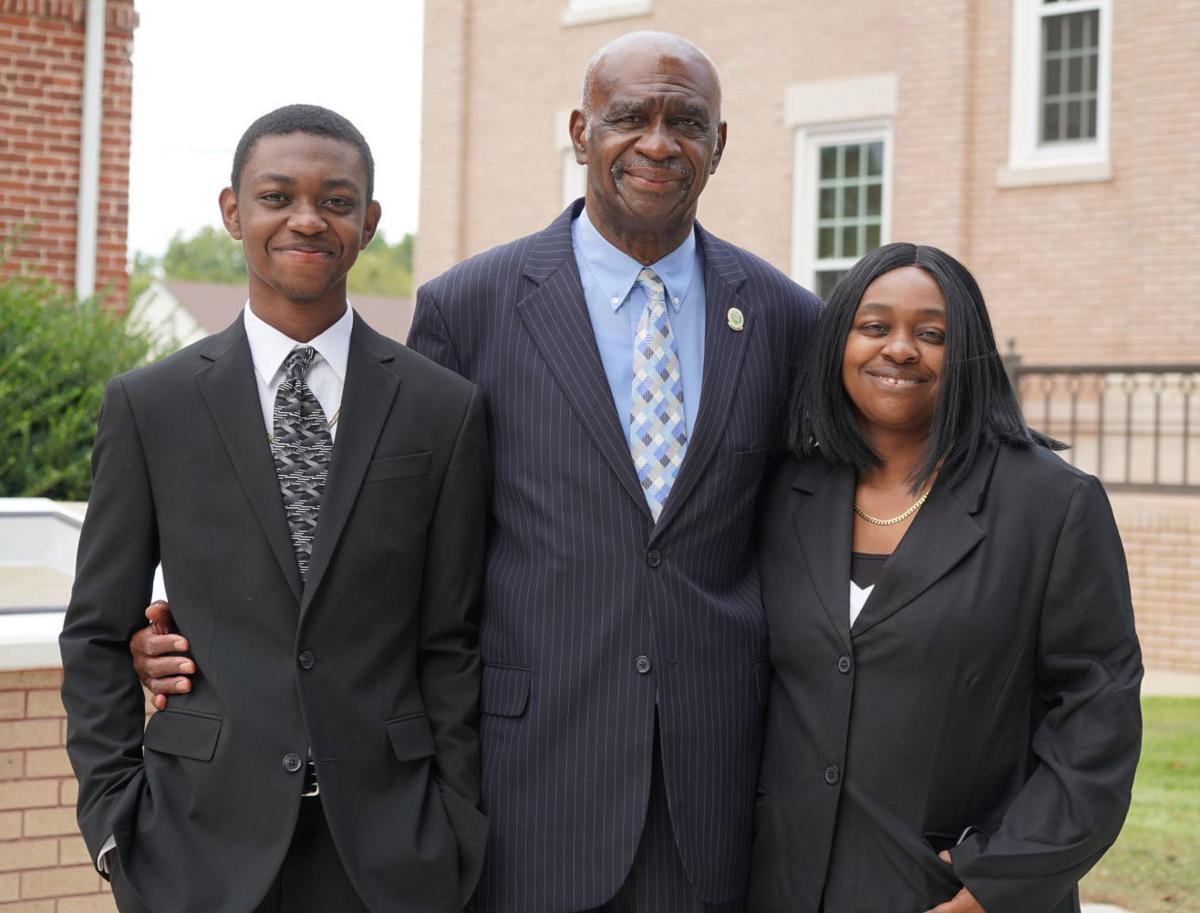 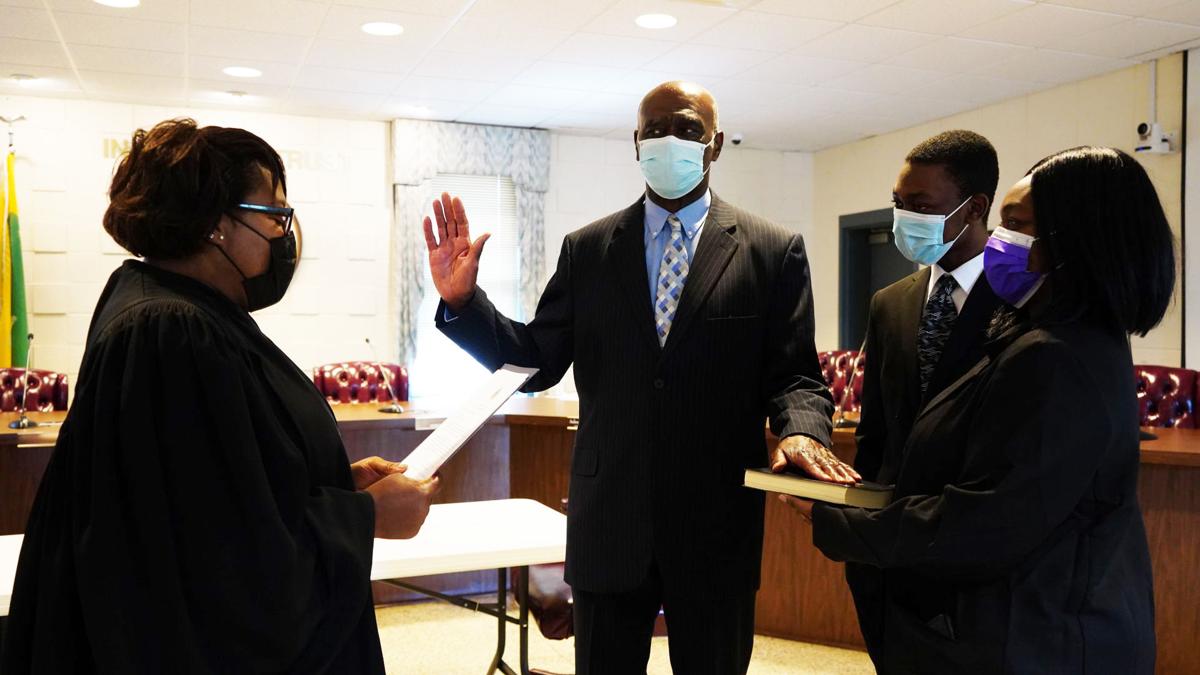 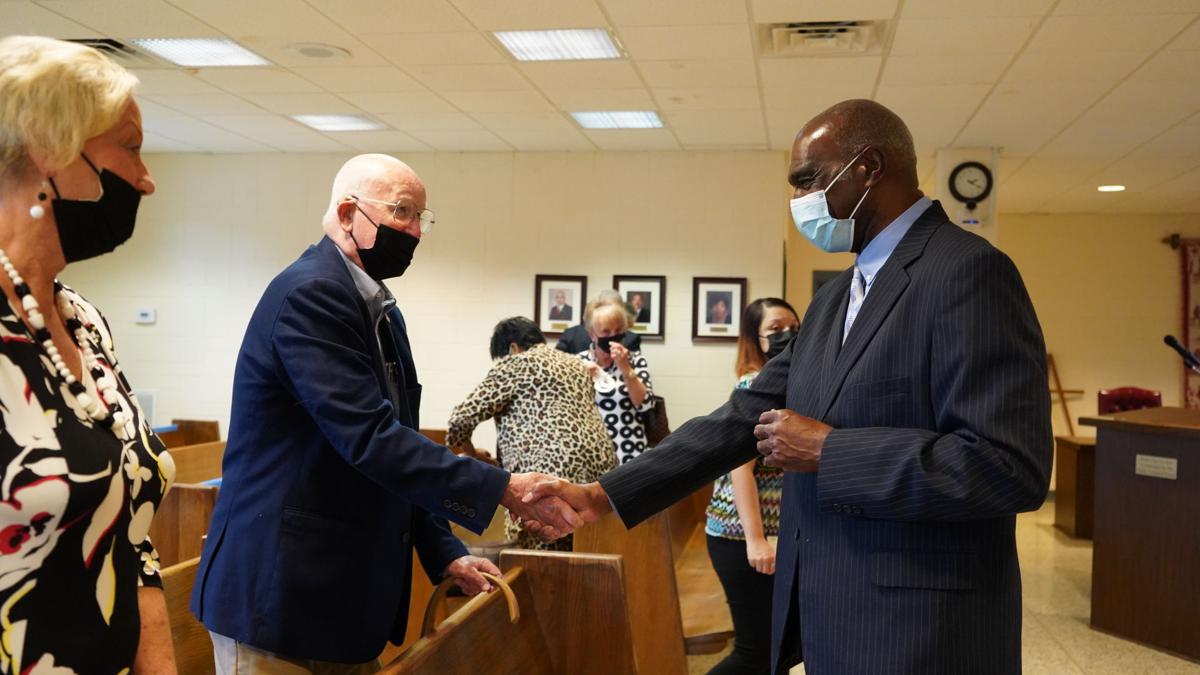 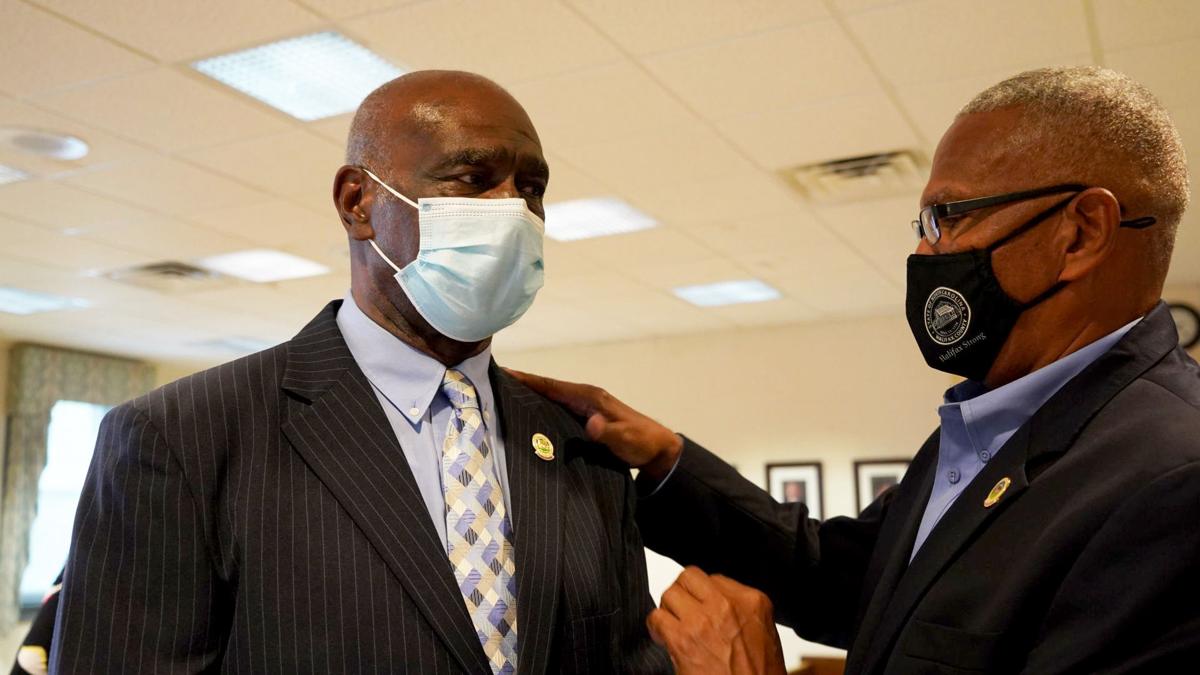 Commissioner John Smith, left, received his commissioner lapel pin by Chairman Vernon Bryant on Tuesday after he was sworn in on the Halifax County Board of Commissioners. 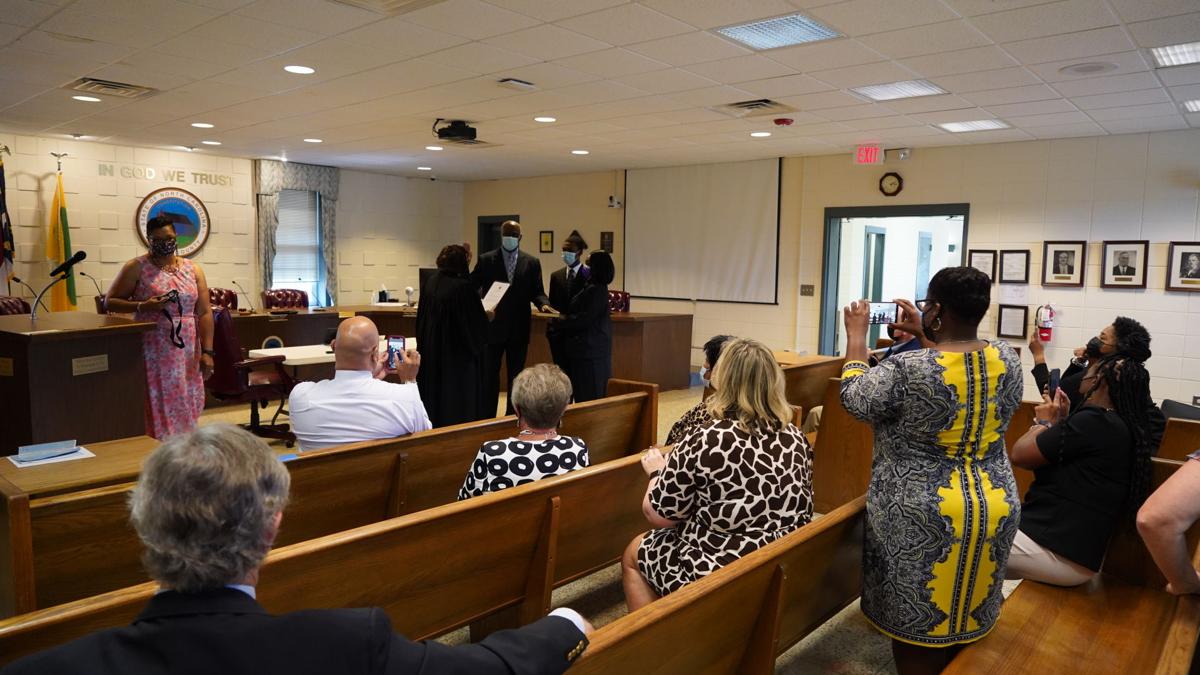 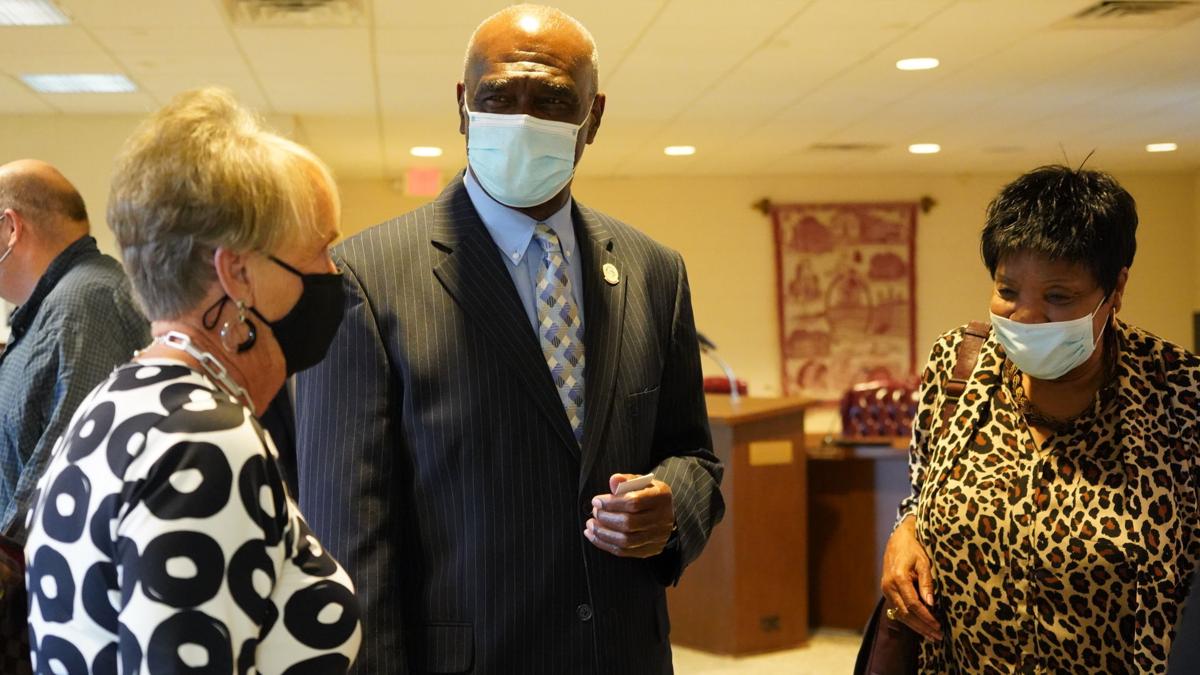 Pictured are the late Marcelle Smith, left, with his father, John Smith.

Commissioner John Smith, left, received his commissioner lapel pin by Chairman Vernon Bryant on Tuesday after he was sworn in on the Halifax County Board of Commissioners.

HALIFAX — The Halifax County Board of Commissioners welcomed newly appointed Commissioner John Smith on Tuesday as he filled the seat of his late son, Marcelle Smith.

During a virtual board meeting on Monday, commissioners approved to appoint John to his son’s vacant position since Marcelle’s passing on Aug. 4.

“I’ve known Mr. John Smith, Marcelle’s father, for a number of years, and he is a very fine upstanding gentleman,” Manning said. “I feel like that he would be an asset to fill Marcelle’s seat on the county commissioners.”

Board attorney Glynn Rollins said the motion was appropriate, and John will fill the vacancy until the first Monday in December of 2022. Rollins said by statute there will be an election in 2022 for the balance of Marcelle’s term, which was to end December of 2024.

Commissioner Linda Brewer seconded Manning’s motion, and John was appointed as a commissioner by unanimous approval.

Commissioner Patrick Qualls said he was happy that he was able to know Marcelle through the board and that it was a good relationship with an honorable and good man.

“I think we’re replacing him with the next best thing to him,” Qualls said. “It kind of warms my heart a little bit, and I’m sure Marcelle’s looking down, and it warms his heart a bit as well.”

Commissioner Carolyn Johnson said she had known both Smiths for a very long time.

“I am pleased that he is willing to accept this nomination,” Johnson said.

Manning said he is pleased John agreed to serve and said it sat well in his heart because he made the same motion to appoint Marcelle to his first term.

“It’s going to run in the family,” Brown said. “I think he is a very intelligent and very reasonable man and does a lot to be objective in his approach.”

Brewer said she thought this was the best thing that could happen for the county and the board of commissioners during this time.

“Mr. Smith has served honorably on several boards for our county, and he is well respected throughout the county,” she said. “We are fortunate to have him agree to join us.”

“I tell you, Marcelle is definitely smiling down and very proud to know his dad is going to follow in his footsteps,” Bryant said.

On Tuesday, commissioners, officials and guests were invited into the commissioners’ board room at the Historic Courthouse in Halifax to witness the swearing-in of John by Chief District Court Judge of District 6 Brenda Branch. John was joined by his grandson, 15-year-old Daylan Smith, and his daughter, Beverly Williams. It was a proud moment for those watching as some wiped tears off their face as John took his oath of office and filling the vacant seat left by his son, who most everyone in the room knew.

John thanked the citizens and commissioners of Halifax County for appointing him to the position.

“I don’t feel worthy,” he said with emotion. “The shoes I’m trying to fill are some big shoes. It’s kind of odd that a father follows his son. We normally think it would be the other way around, but God has a plan, and we have to adhere to his plan and accept what he allows. I promise that I don’t come here with any particular agenda, but I do come here with a promise that whatever matters come before this board, I will listen to them, hear the conclusion of the whole matter, and cast my vote in the manner which I feel like would be for the best interest of every citizen here in Halifax County.”

In other news, during the commissioners’ meeting on Monday, a resolution was presented in honor of Enfield native Reid Johnston as a role model for young athletes.

Bryant said they are very proud of Johnston being from Enfield and Halifax County.

“We do appreciate all that you have done and all that you’re going to do for Halifax County and for the youth and for other individuals in our county,” he said.

Johnston played baseball for the North Carolina State University and earned 13 All ACC Atlantic Coast Conference and All ACC Academic Team honors in 2021.

Johnston attended the meeting virtually and thanked everyone.

“It’s such an honor to be on this call and represent Halifax County, and I take with pride that I’m able to be a role model for younger athletes,” he said. “When I was growing up, there were many athletes that I looked up to as well. Halifax County is such a special place for me and my family. I’ve lived there my whole life.”