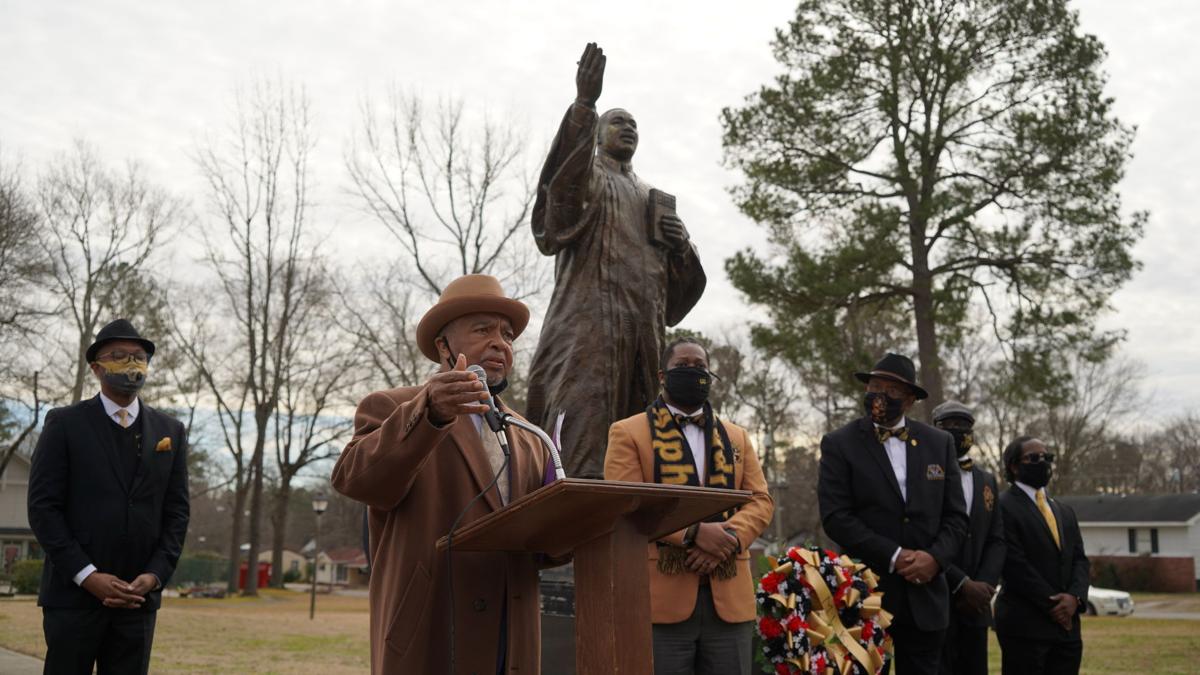 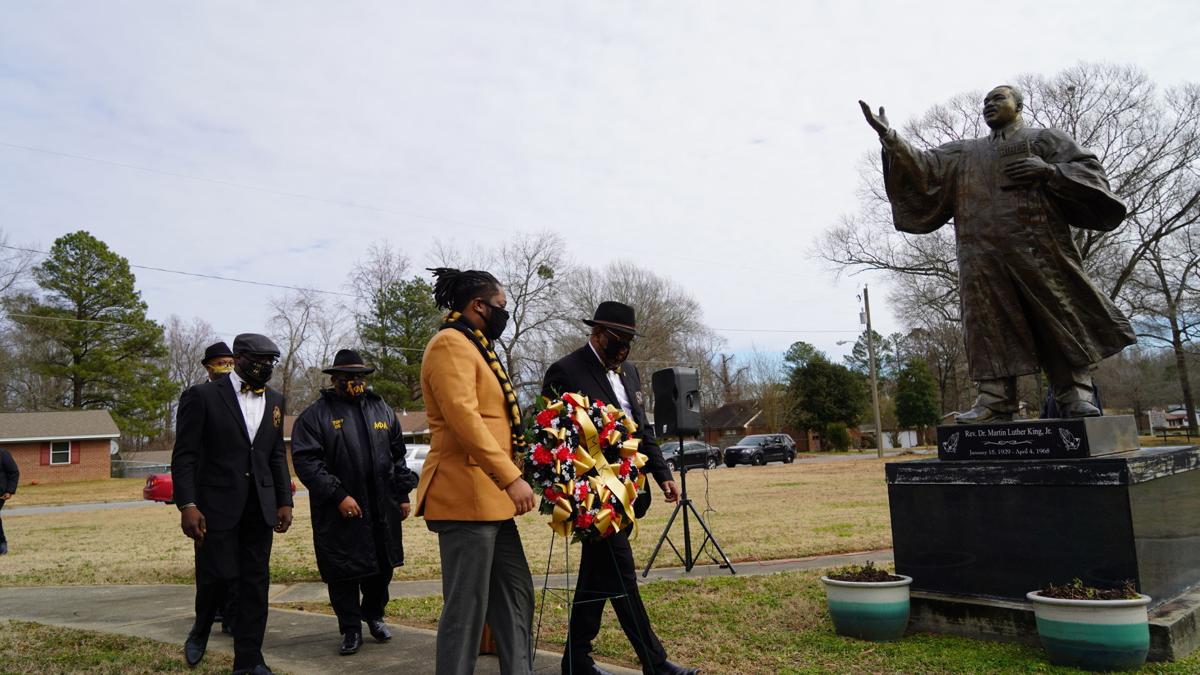 Members of the Alpha Phi Alpha Fraternity Inc. placed a wreath at the base of the Martin Luther King Jr. statue at MLK Community Park Sunday. 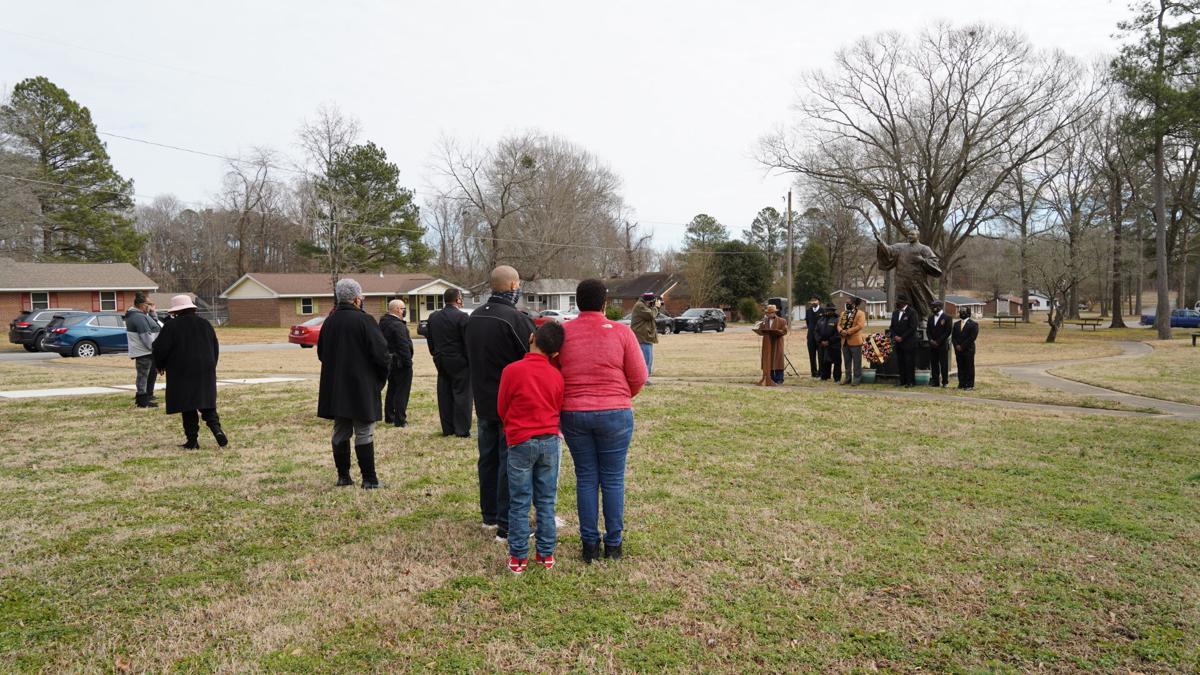 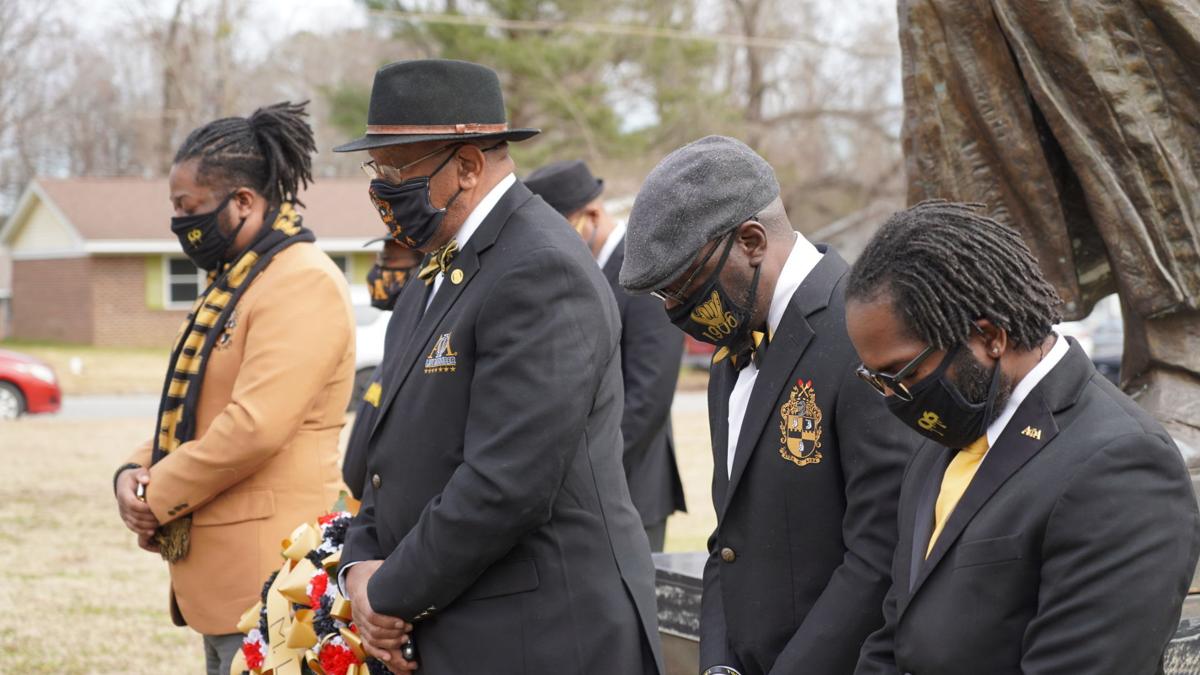 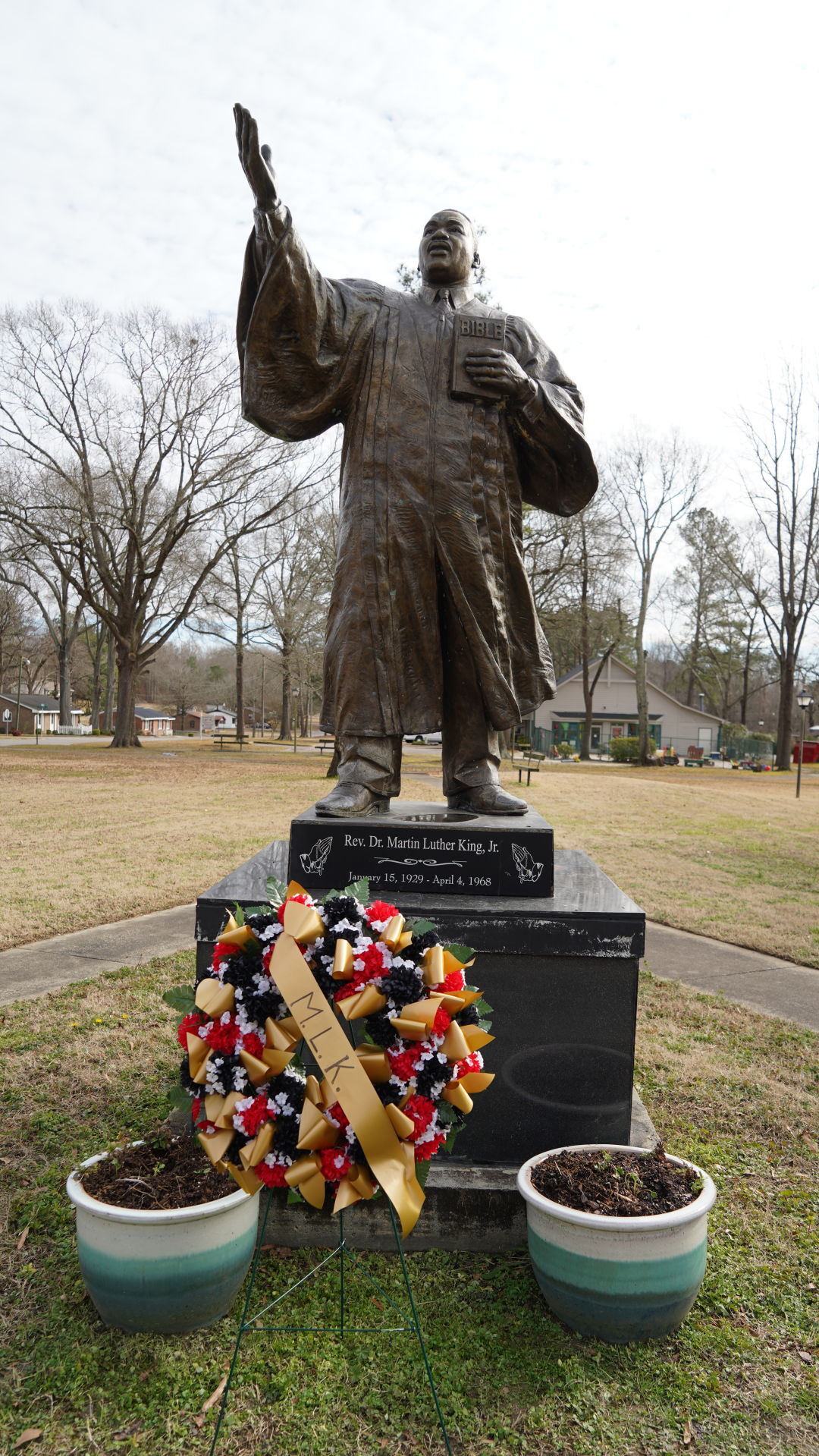 A wreath was laid at the base of the Martin Luther King Jr. statue in Roanoke Rapids on Sunday. 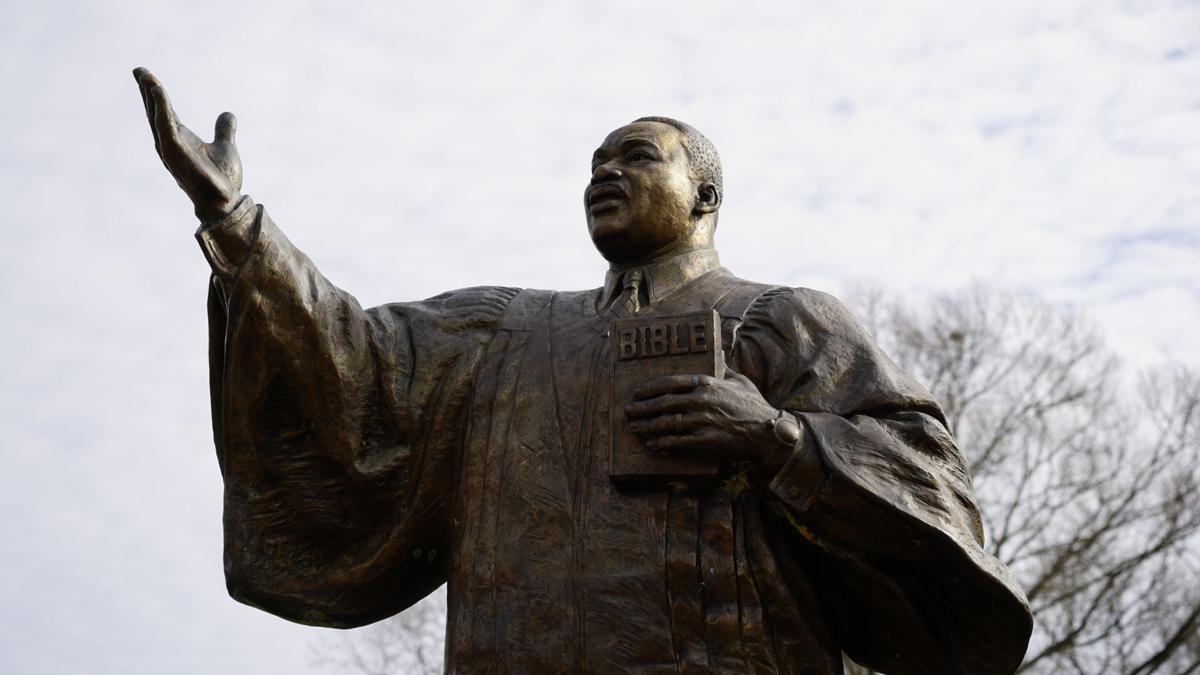 The statue of Martin Luther King Jr. at MLK Community Park displays him holding the Bible to his heart while extending his other hand outward. 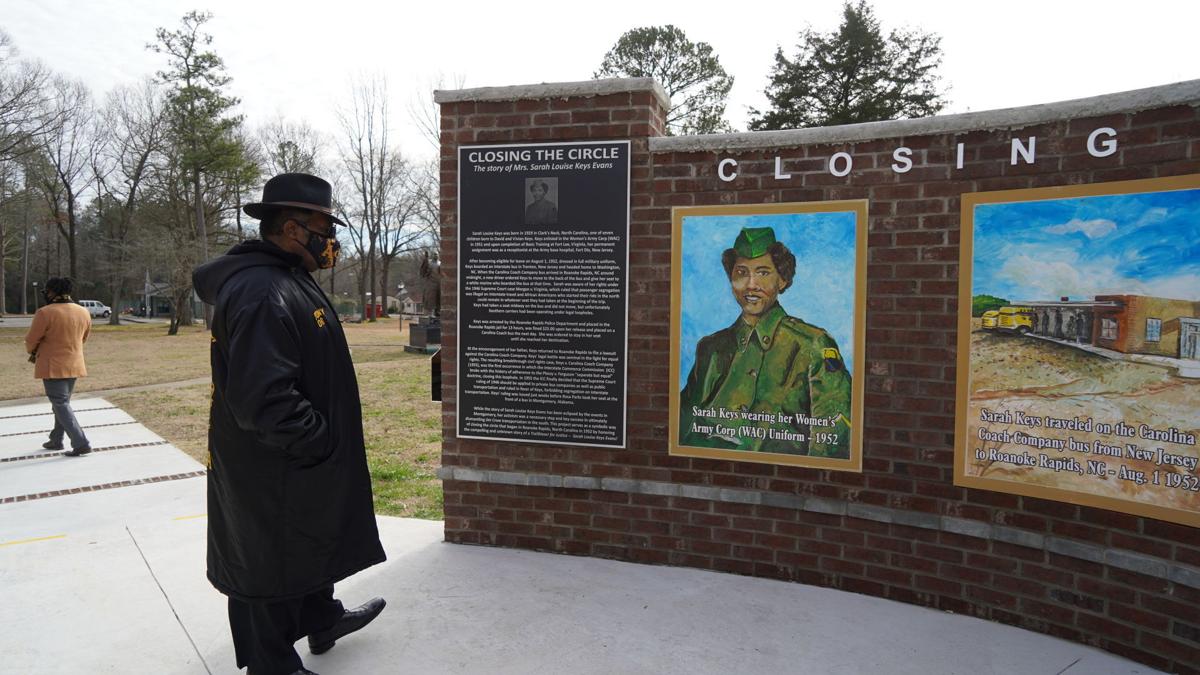 Members of the Alpha Phi Alpha Fraternity Inc. placed a wreath at the base of the Martin Luther King Jr. statue at MLK Community Park Sunday.

A wreath was laid at the base of the Martin Luther King Jr. statue in Roanoke Rapids on Sunday.

The statue of Martin Luther King Jr. at MLK Community Park displays him holding the Bible to his heart while extending his other hand outward.

Laying of the wreath and words of wisdomSponsored by the Southern Christian Leadership Conference, members of the Alpha Phi Alpha Fraternity Inc. honored the late Martin Luther King Jr., a fraternity member. The ceremony began with fraternity members laying a wreath at the foot of a statue representing King.

In following, Charles McCollum Sr., president of the SCLC, Roanoke Valley N.C. Chapter, and pastor of Oak Grove Baptist Church in Littleton and Piney Grove Baptist Church in Halifax, welcomed the public as the keynote speaker. McCollum stood in front of the lined fraternity members and attendees sparsely placed and told everyone that they were proud to continue the occasion despite today’s hardships.

“Today, we stand on hallowed and sacred ground to honor the life and legacy of Dr. Martin Luther King Jr.,” he said. “A mighty warrior who fought the good fight of faith led a movement in the spirit of nonviolence and peaceful protest that changed the course of history. Dr. King walked the path of a servant in service to others, yet stood among us as an unconquered champion; a drum major for justice and peace.”

McCollum’s speech entailed King delivering his “The Drum Major Instinct” sermon at Ebenezer Baptist Church in Atlanta on Feb. 4, 1968 — two months before his assassination in Memphis, Tennessee. McCollum remarked about the sermon and how King told his congregation about the destructive forces surrounding the drum major instinct, which King defined as the desire to be first, to be recognized and the desire to receive distinction.

According to Standford University’s Martin Luther King Jr. Research and Education Institute website, a transcript of that sermon has King warning of what the drum major could lead to.

“And think of what has happened in history as a result of this perverted use of the drum major instinct,” he said during his sermon. “It has led to the most tragic prejudice, the most tragic expressions of man’s inhumanity to man.”

Toward the end of his sermon, King suggested a different direction of the drum major instinct through clarity of who he was as a man.

Read the transcript at stanford.io/3oXIInr.

Excerpts of the sermon were echoed during Sunday’s ceremony as McCollum extended such spirit to the public.

“As stakeholders in King’s Dream of redeeming the soul of America, the urgent need is to decide the role you will play in this awesome task of creating a more inclusive America,” he said. “Today, King’s words resonate with us with new depth and meaning. It’s only through a shared responsibility and the richness of ideas that come from a diversity of people and perspectives that we can tackle the challenges that lie ahead.”

McCollum added the shared history of the nation has its strands of darkness and light.

Reflecting on King and todayErvin Griffin Sr., a member of Alpha Phi Alpha Fraternity Inc., said during an interview afterward that now is an important time for Americans to come together to honor King with the distress the world is experiencing. Griffin added that King always said that a divided people would fall, but together they will have the strongest democracy in the world.

“I think that’s the important thing that we got to remember,” he said. “We are all Americans, and that this is a democracy.”

With what the nation is experiencing today with the effects of the COVID-19 pandemic, riots, politics and the recent election dividing people, Ervin was asked if people have forgotten the messages King represented to the public.

“I don’t know if they’ve forgotten, but sometimes as Americans, we think we know more than we really know,” he said. “We think our rights — whatever that means, are more important than your rights. We got to remember that we all have the same rights and my rights stop when it encroaches on his rights. I think that’s what we’ve got to remember.”

Another member, Jonathan Bulluck, who is also president of Epsilon Sigma Lambda Chapter in Rocky Mount, said honoring King helps remind people in the nation and around the world of his legacy and message.

In regard to the message, many protests in 2020 and today have turned into riots that have resulted in costs in losses of more than $1B in damages across the nation, marking it as the costliest civil disorder in U.S. history, according to a preliminary estimate from the Insurance Information Institute website.

Read more of the information at bit.ly/2M1MNIQ.

In addition to the catastrophe, violence resulted in injuries and death.

Bulluck was asked if he could share advice on how to help de-escalate the tension among all groups.

the same things for our families. We want to be healthy, have a nice life, to be prosperous.”

However, people have a different

way of going about achieving those goals, Bulluck said.

“But if you look and talk together instead of looking about what we don’t have and look at what we all want, we can come together,” he said. “We can say that even though we look differently — we come from different areas of the world, we still want the same thing for us, and I think that’s what’s important. We have to come together and break down all the barriers and go over the basic part of what makes us ‘us,’ and wanting to do well for our family, for ourselves and for our children.”

True character of Martin Luther King Jr.One who gazes upon King’s statue at the MLK Community Park may marvel at his gesture but miss the clerical attire and the Bible he is holding over his heart while extending his hand out to the open. However, in other areas of the nation, King’s statue is erected depicting him wearing a suit.

In Washington, D.C., a 30-foot white granite stone structure of King in a suit, arms crossed and a rolled parchment in his hand is displayed at the West Potomac Park representing the year the Civil Rights Act of 1964 became law. In Birmingham, Alabama, stands a statue of King at Kelly Ingram Park dressed in a suit with his hand holding a book with no visible inscription.

A 12-foot high statue of King was unveiled in White Plains, New York, in 2007, of him in a suit and holding a plain book. According to a news article, the sculptor Milton Sherrill said, “could be a Bible, or it could be whatever you think it is.”

Though suits are worn in many churches, and there are some statues of King across nation in clerical attire and holding a book, research has not yielded any indication of what the book he is holding represents. There may be some statues of King out there that is like the one in Roanoke Rapids, but it seems to erode the prominent man’s character without displaying his beliefs appropriately that defined his character to the fullest.

When asked about the noticeable aspect of a statue of King, McCollum said that he was in agreement in terms that it is more than symbolic, but leads to the character of a person.

“And saying that you had these kinds of attributes is that you are serious about your faith,” he said. “And King was one that in all of his speeches was always laced with scripture and godliness. This is what this guy was all about.”

This reporter suggested that the missing inscription could change the context of King’s demeanor, to which McCollum said that is what brings people together unless they ignore it — and people have ignored that part. He recalled one person in a meeting who had denounced King.

“But King never started a riot,” McCollum said. “He never instigated anything in terms of destruction. All his whole demeanor was one of humility and one of reconciliation — let’s get together and heal. And that’s what we’ve got to do now. We need to heal this land.”

The added inscription of “Bible” on the book of the King’s statue at MLK Community Park seems to completely show the character of the man and the foundation he stood on truthfully.

“I look to a day when people will not be judged by the color of their skin, but by the content of their character,” King said during his “I Have a Dream” speech in 1963.