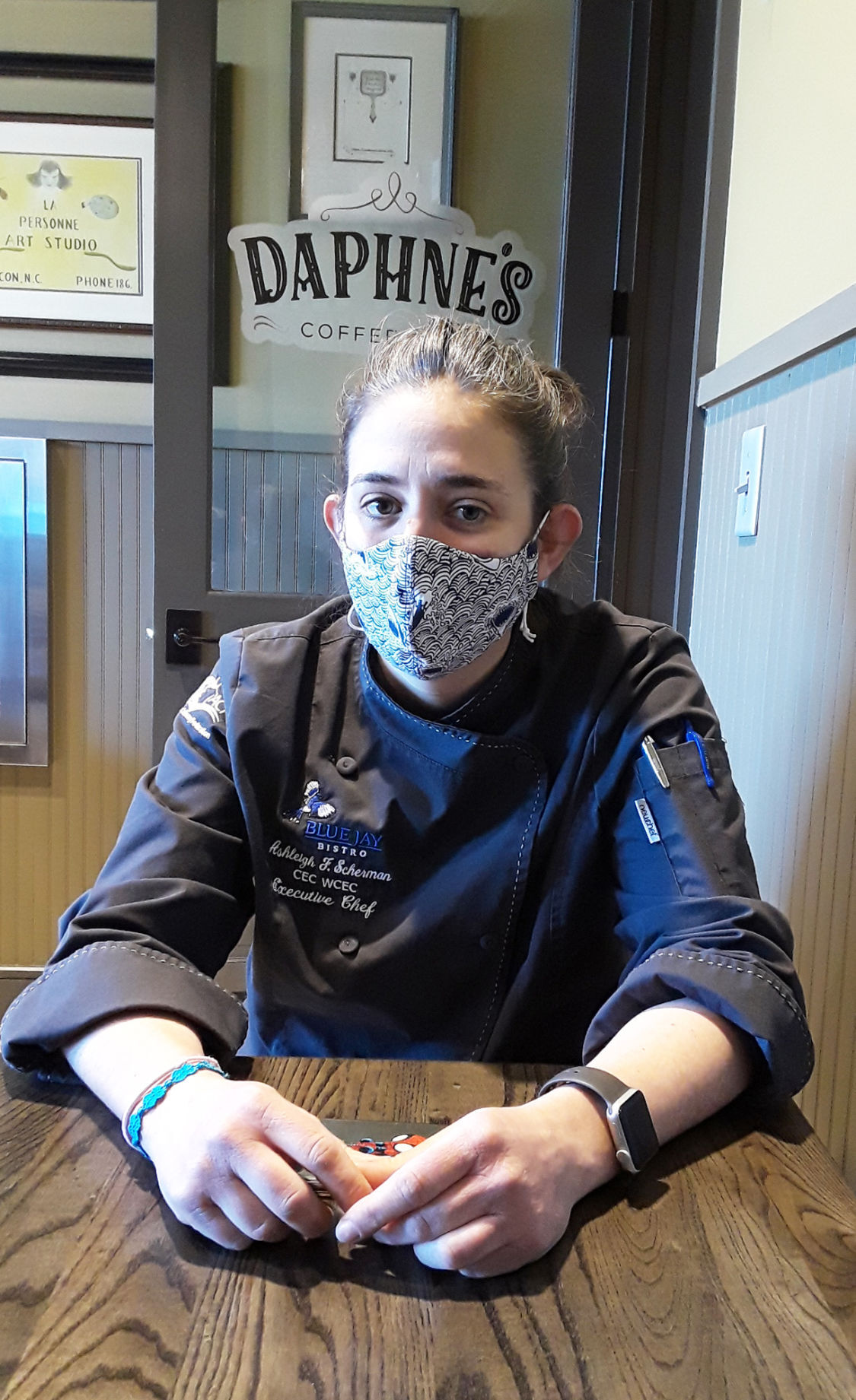 Right: Ashleigh Fleming is the executive

chef of Blue Jay Bistro to open this spring. 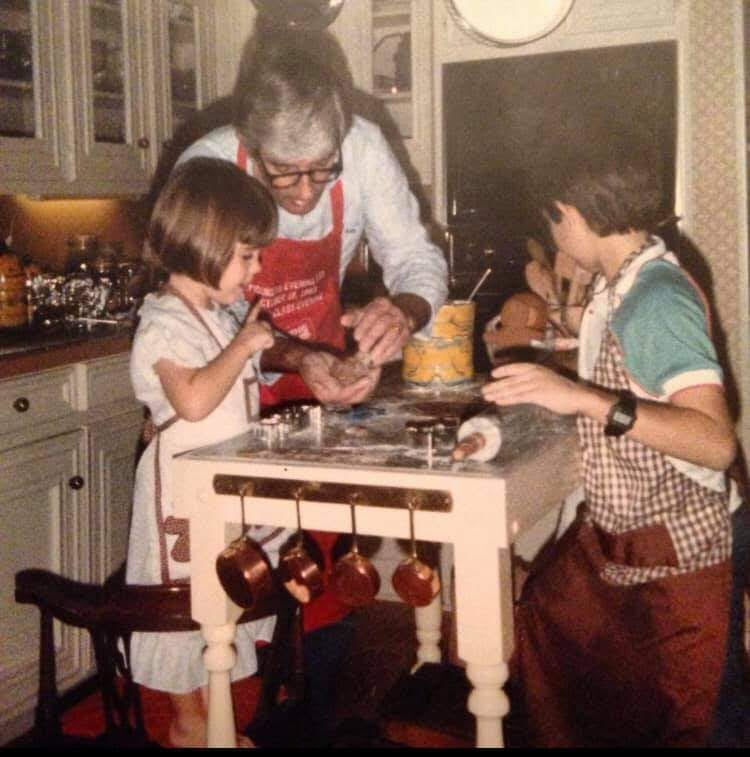 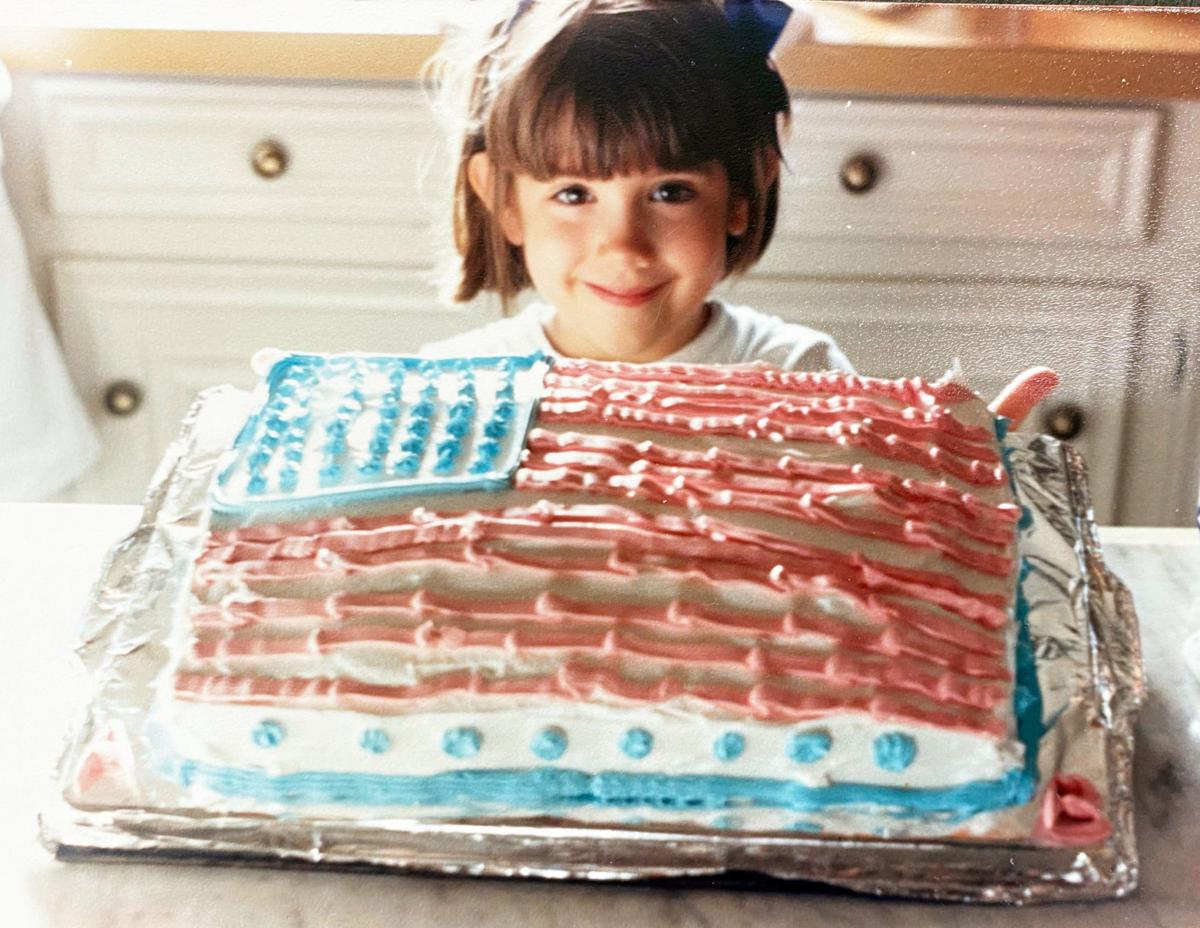 Ashleigh Fleming made this cake with her dad for the Fourth of July. 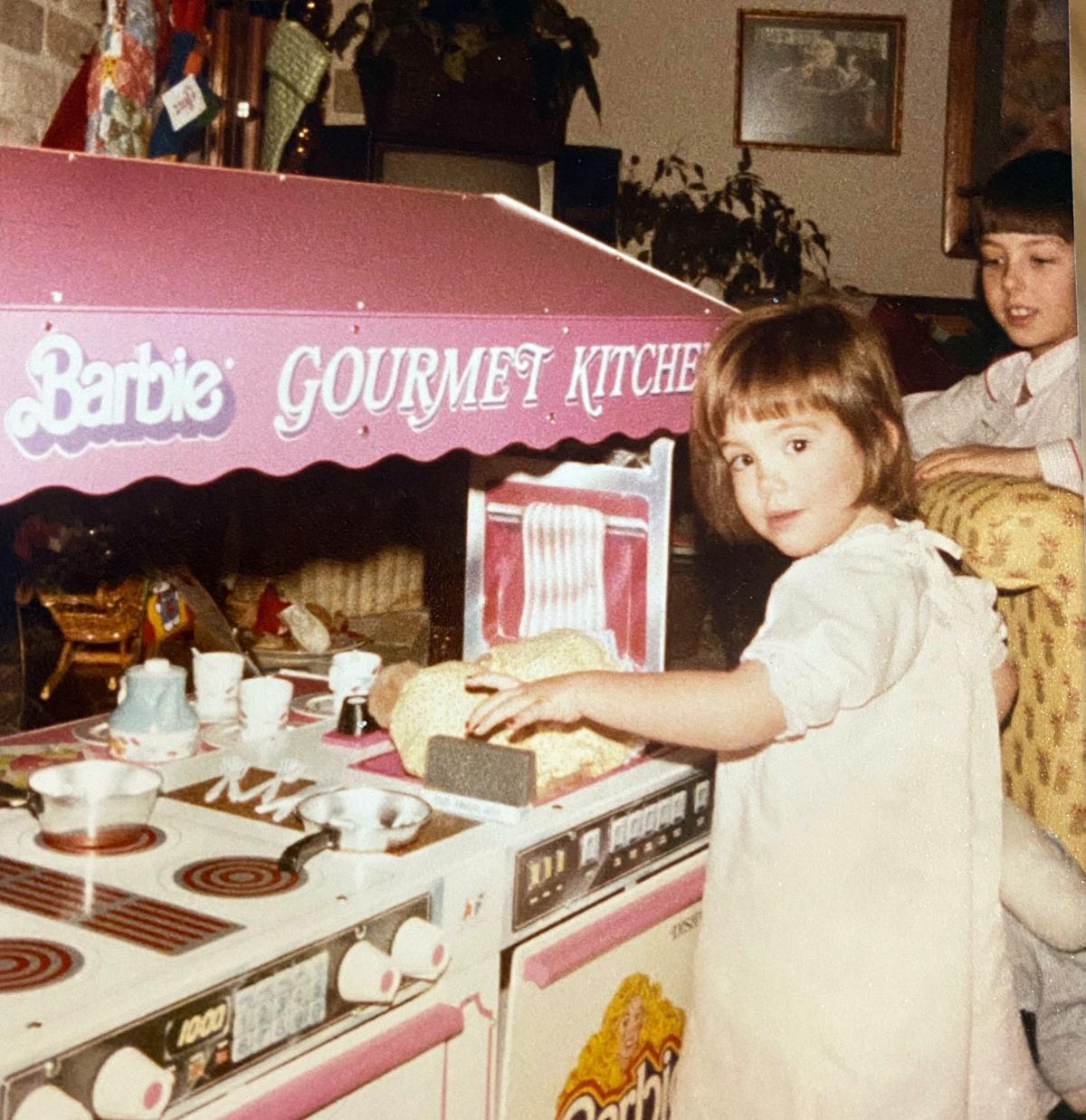 Ashleigh Fleming and her brother, Glynn, enjoyed cooking on her Barbie kitchenette when she was 3 years old. 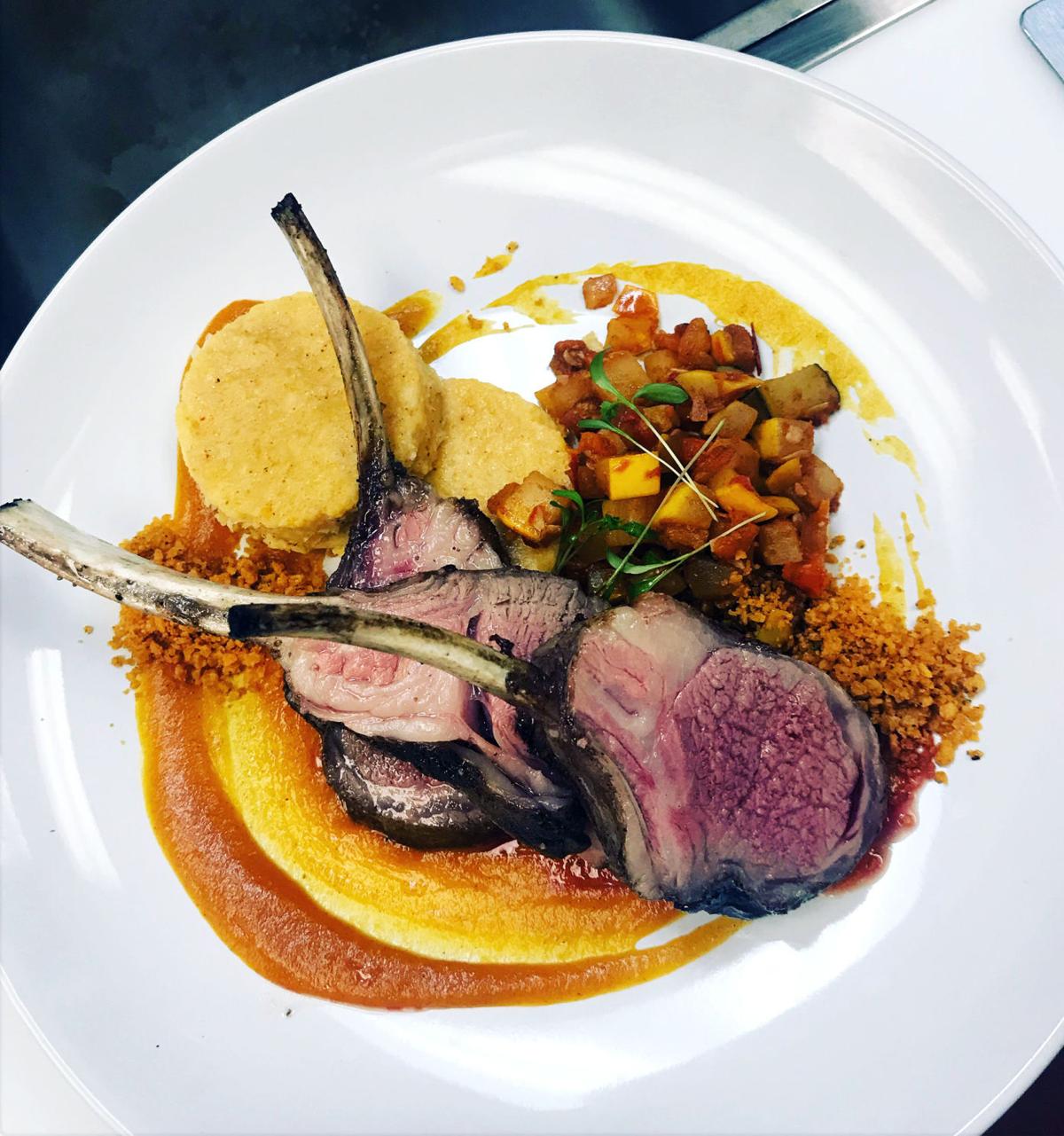 This lamb dish was one of the deciding factors for the Fitts to hire Ashleigh Fleming as executive chef. It contains Adobo spiced rack of lamb, roasted carrot puree, ancho ratatouille, tamale cakes and Frito gremolata. 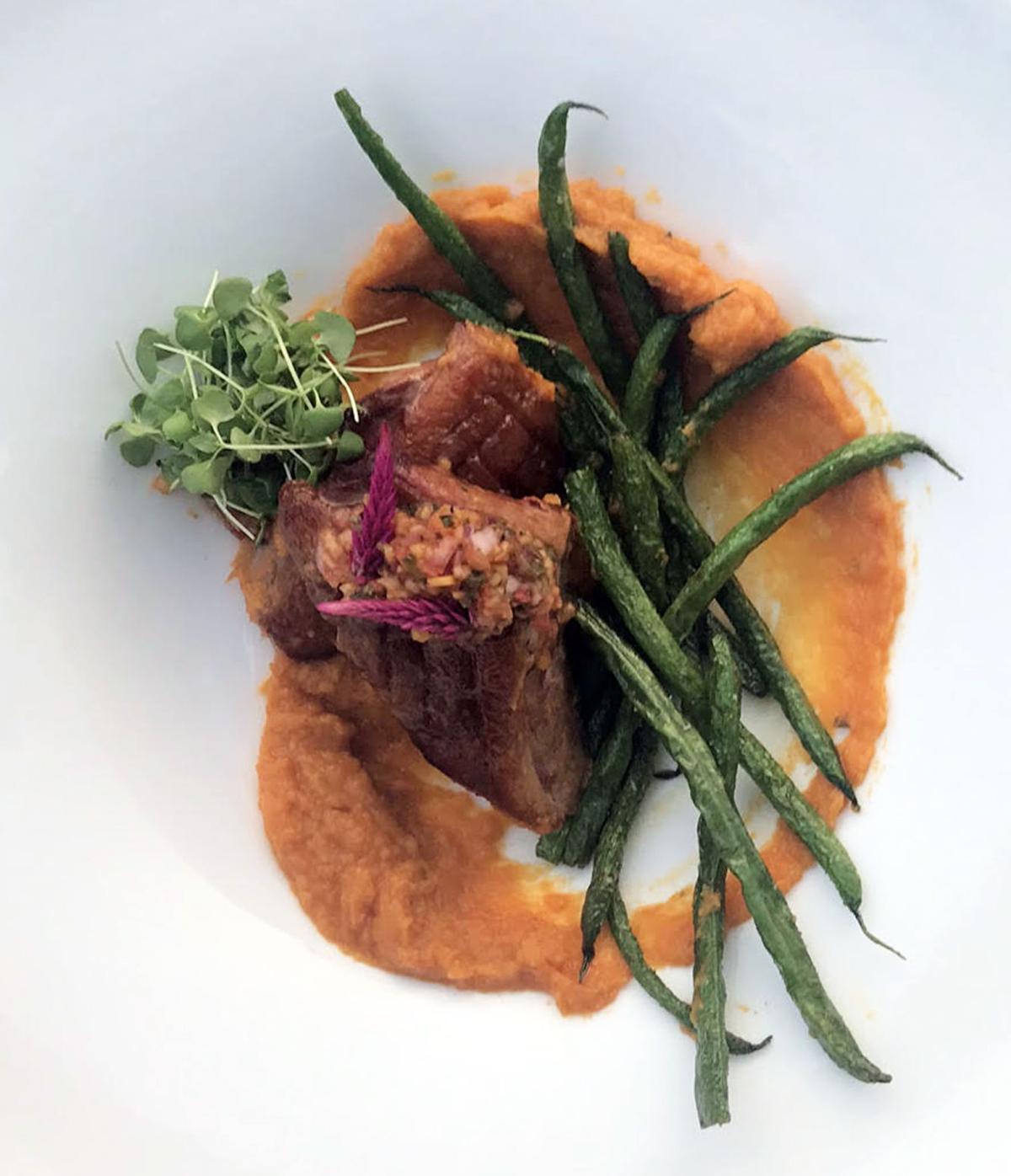 This dish is a guajillo maple glazed duck breast, sweet potato puree, blistered green beans, and local peach and basil salsa. It is one of Ashleigh Fleming’s favorite creations from summers past. Duck will make an an appearance on the Blue Jay Bistro menu in various formats, she said. 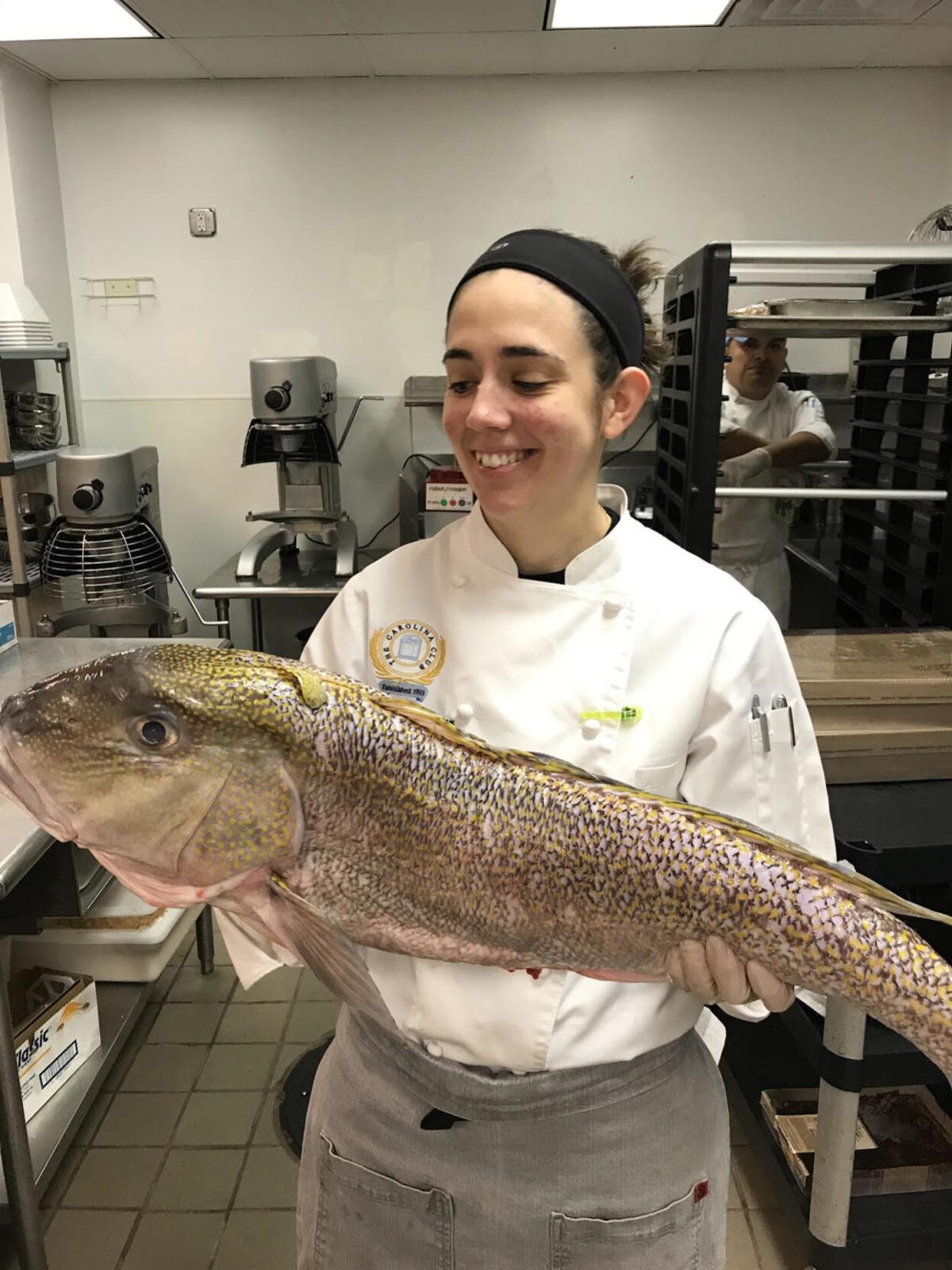 Ashleigh Fleming at her first executive chef job at Carolina Club at UNC in Chapel Hill around 2015. She was teaching her team how to break down a whole N.C. golden tile fish.

Right: Ashleigh Fleming is the executive

chef of Blue Jay Bistro to open this spring.

Ashleigh Fleming made this cake with her dad for the Fourth of July.

Ashleigh Fleming and her brother, Glynn, enjoyed cooking on her Barbie kitchenette when she was 3 years old.

This lamb dish was one of the deciding factors for the Fitts to hire Ashleigh Fleming as executive chef. It contains Adobo spiced rack of lamb, roasted carrot puree, ancho ratatouille, tamale cakes and Frito gremolata.

This dish is a guajillo maple glazed duck breast, sweet potato puree, blistered green beans, and local peach and basil salsa. It is one of Ashleigh Fleming’s favorite creations from summers past. Duck will make an an appearance on the Blue Jay Bistro menu in various formats, she said.

Ashleigh Fleming at her first executive chef job at Carolina Club at UNC in Chapel Hill around 2015. She was teaching her team how to break down a whole N.C. golden tile fish.

Creating pasta is meditative, according to Ashleigh Fleming.

“Pasta can be flour and egg and that’s it — but to do it the slow way, the right way, to roll it out by hand, to watch those ingredients that are really simple kind of come together and get the perfect lamination and the perfect texture and that perfect toothiness is super meditative. It’s the same repetitive process over and over again until you roll this perfectly thick dough out — there is a real specific even-keel thickness to it.”

Ashleigh was hired by Deb and Ed Fitts as executive chef of the Blue Jay Bistro to open this spring. She started on Aug. 1. Deb said Ashleigh was hired for her spunk, drive, leadership, good work ethic in addition to her amazing culinary talent.

“She’s a culinary grad, passionate about food and hospitality,” Deb said. “She is always striving for perfection and is a key team player.”

Like many chefs, Ashleigh was laid off in March because of COVID-19.

“Almost everyone I know — all of us were without work,” she said.

During the summer in figuring out her next steps, Ashleigh discovered her neighbors by selling them tacos, enchiladas and tamales from her Durham home. Folks still email her with catering orders, she said.

Also, a job hunt was in the works.

“I was almost thinking to myself about not being a chef any longer,” she said. “This is a difficult job and it can really be heartbreaking — you put a lot in, you miss a lot. I had been in a few situations, back-to-back, where the give back just wasn’t there, and finding myself in the middle of COVID. The lines are out the door at Chick-fil-A wrapped around the corner. Maybe people just don’t want this kind of food, and I was at a crossroads wondering what I was going to do.”

The Fitts had a general manager posting online of which Ashleigh applied. It was more service-oriented, she said. She Googled Littleton and discovered it was an hour and 15 minutes from Durham. She met with the Fitts and Deb pointed out to Ashleigh several times that her resume is very chef-oriented, Ashleigh said.

Deb asked Ashleigh, “Are you sure you don’t want to be the chef?”

During her interview, everything Ashleigh said reverted back to food.

“I kept saying,’No, I think I’m good,’ ” Ashleigh said. “I had been through some bad experiences and during COVID I found myself looking for other things.”

It is not the first time she had considered pursuing a career other than executive chef. Coming from a hospitality family, her father, Rob Fleming, had been in the restaurant business for a long time, but mostly in the service side. He told her to pursue anything else.

“I’m very hard-headed like his Mini-me,” she said. “I went to art school and did different things to try and avoid this. I always worked in restaurants to put myself through school and pay my tuition and I had a gap where I had to stop art school and get more money for tuition. I was working in restaurants and really having a lot of fun. I went to my dad and said, ‘I really like this — I really want to do this.’ He said, ‘OK, if you’re going to do this you need to go to school and do it the right way.”

Ashleigh entered the Culinary Institute of America in New York in 2005 and graduated in 2009 with a Bachelor of Science in Hospitality Management.

After graduation, she worked her way up through the ranks, beginning as a fry cook at a country club in Houston, Texas. And it was in Houston where life began for Ashleigh.

Her grandmother, Ione Gray, who she called NiNi, had a huge influence on Ashleigh’s life and the food she creates. She is the epitome of southern hostess — amazing food, really good hospitality, Ashleigh said. With a pretty big family, Gray has five daughters — there was no shortage of conversation growing up.

“We went to her house for the holidays,” Ashleigh said. “It’s kind of loud and she put food on the table and everyone was happy and quiet. It was my favorite and I have really good memories. And her food has really distinct layers of flavor and spices. My father is an amazing cook and baker, he always had a big hand in that stuff too.”

Cooking started early as illustrated in a vintage photo of Ashleigh cooking up some treats at her Barbie kitchenette when she was 3 years old, with her brother, Glynn Fleming.

“My brother and I are extremely close,” she said.

She was welcome to help in the kitchen and baking with her dad, who was “a bit like growing up with Robin Williams,” was a common practice.

“He was kind of spontaneous and crazy and that happened in the kitchen a lot,” she said. “He and my brother and I were making biscuits one day and we got into a huge dough fight and there was dough and flour everywhere in the kitchen.”

One of her favorite pictures is of a giant American flag cake she and her dad made for the Fourth of July, she said.

“We talked further and I said, ‘OK, I’m interested,” Ashleigh said. “I wrote them a menu, I cooked for them and several guests and the more I talked to Deb and Ed, the more the vision of what they are trying to do is most contagious — it’s almost like, I don’t know how you wouldn’t want to be a part of it. It’s one thing for someone to tell you, ‘We’re going to do this — we’re going to do it the right way, don’t worry.’ After a month of working for them it was really apparent, they meant that — it was a genuine sentiment.”

And so far, working for the Fitts has been really cool, Ashleigh said.

“I have a lot of freedom and a lot of support like I’ve never had from owners,” she said. “I’ve worked on independent restaurant projects, I’ve worked for country clubs, and to have this feeling that you are really a part of things — that your opinion matters, that who you are matters — each one of our team members matters — their personality, what they do, what they bring to the table.”

Some of that team works at Daphne’s Coffee Shop, which opened in December, of which Ashleigh oversees as part of her scope. It is next to the bistro. It is there that she found herself in a moment of small-town appreciation earlier this week when she filled in on her day off.

“I came in and within 10 minutes I was so happy to be here,” she said. “I knew everyone who came in here — it’s a small town and I know all the regulars — I know what they drink. I was so happy I texted Deb and I said, ‘Sometimes working in a small town is pretty cool.’ ”

The Fitts are as down to earth and as genuine as they can be, she said.

“For me to talk to Ed — this has nothing to do with Ed — this is about Littleton,” Ashleigh said. “It is about where he’s from and giving people here something to be excited about about, creating a buzz for the town, showing off this place he is kind of proud of and giving people that have never left here a reason to be proud. Look — look at what you can do! That’s really neat to be a part of somebody coming back and giving back to their community and it’s not about them, it’s about Littleton and the area.”

Main Street Wines is also due to open this spring next to the coffee shop and the Bistro. They are all located on South Main Street.

“We are really trying to get up and going but it’s been a moving target amidst construction and COVID-19,” she said about the bistro. “The biggest things now are getting all of our smaller equipment in place — simple things, such as pots, pans, bar equipment and then staffing and training.”

Deb said, “We all can’t wait to get open to add another option for the community.”

When asked about her favorite food, Ashleigh replied, “There is nothing better in the world than a fresh tortilla made with really good ingredients and very good masa — that is the way to my heart on a Sunday morning.”