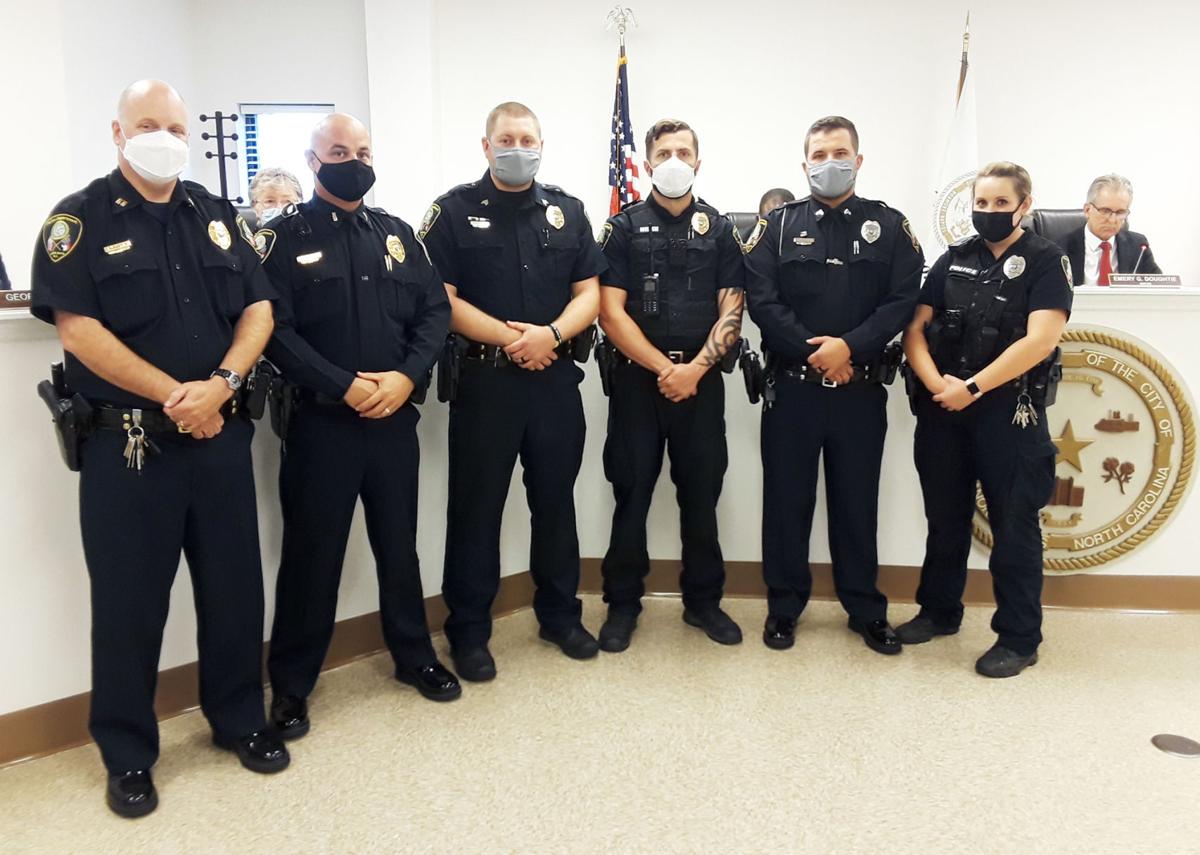 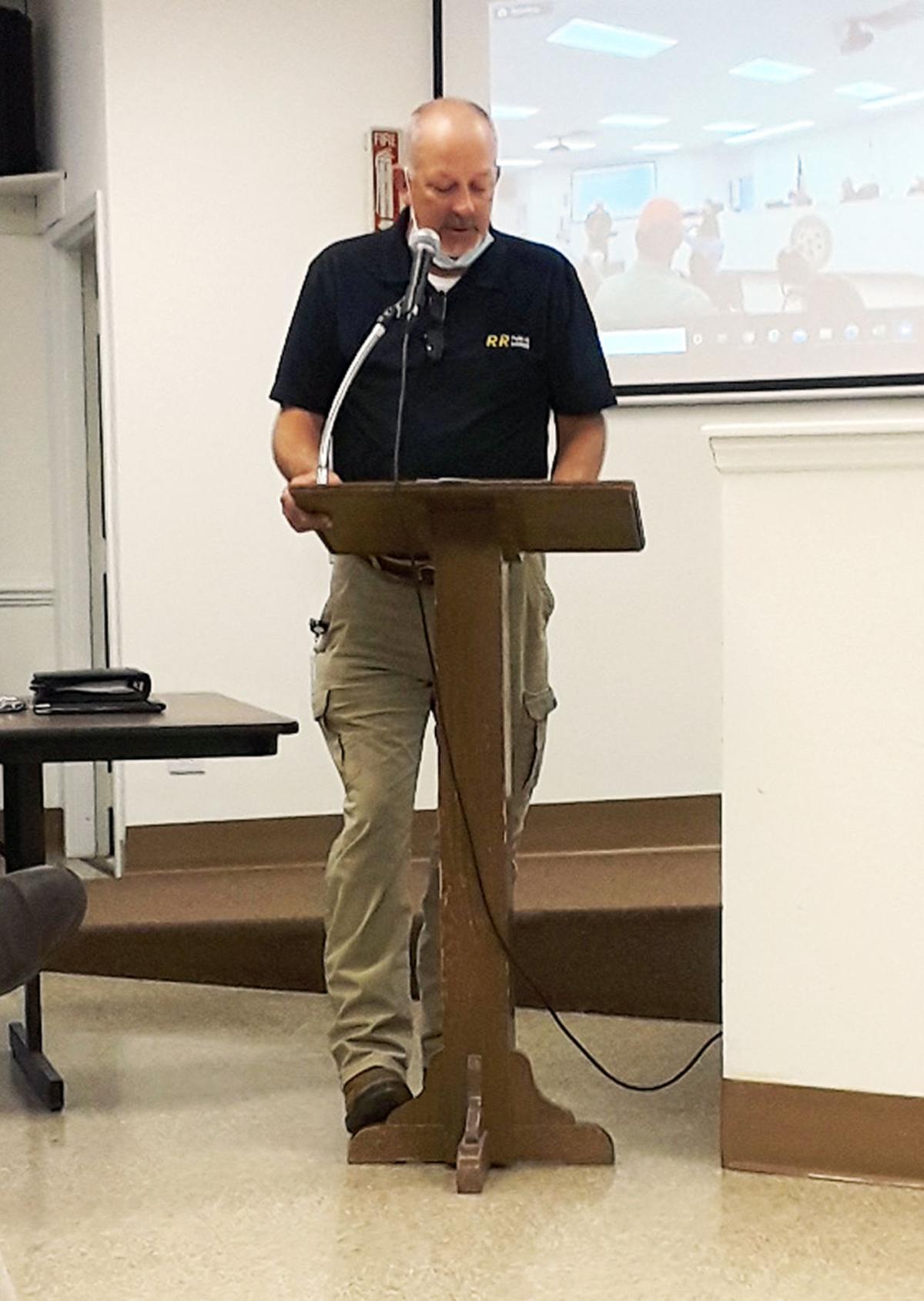 Larry Chalker, Public Works director, reminded folks of the status of repairs being made by the Roanoke Rapids Theatre and the city communications tower.

Larry Chalker, Public Works director, reminded folks of the status of repairs being made by the Roanoke Rapids Theatre and the city communications tower.

ROANOKE RAPIDS — Some recognitions went out to folks at the beginning of the Roanoke Rapids City Council meeting on Tuesday.

Police Chief Bobby Martin presented a K-9 Retirement Resolution for K-9 Jimi, who has faithfully served the city for five years and has recently retired, he said. Council approved the resolution, declaring Jimi as surplus property, and awarding him to his handler, Officer Hannah Grimes.

In addition, Grimes, who was recently promoted to master officer, is leaving the department. Martin said that experience will be hard to replace.

“Unfortunately Hannah is leaving us, she has decided to take a job with DMV [Department of Motor Vehicles], as a DMV inspector,” Martin said. “We will help her any way we can. That’s going to be our loss and their gain. I believe she will be back in this area to help us out.”

Other recognitions were made due to the promotions of the following individuals:

• Charles Burnette, patrol captain, has been with the department since 2000.

• Adam Salmon, patrol lieutenant, has with the department since 2012.

• Daniel Jenkins, patrol lieutenant, has been with the department since 2012.

• Obert Wiltsie, patrol sergeant, has been since with the department since 2016.

• Matthew Hunsucker, patrol sergeant, has been with the department since 2014.

• Jeremy Horne, master officer, is a transplant from Warren County Sheriff’s Office, who has been with the department since 2019.

“He met one of my officers on a traffic collision and started a conversation, and we were fortunate enough to get him,” Martin said. “That is their loss, our gain.”

“I want to thank each and every one of these officers for the hard work and dedication they have shown to the Roanoke Rapids Police Department and to the citizens of Roanoke Rapids. Without officers like this, working hard each and every day, we would struggle to get through the day. I want to make sure everybody understands, all the officers work very hard to protect and serve.”

Larry Chalker, Public Works director, reminded folks of the status of repairs being made by the Roanoke Rapids Theatre.

During a July meeting, Geoffrey Davis, the city attorney, presented the council and mayor with a draft of a consideration of contract modification with G&T Holdings, the owners of Roanoke Rapids Theatre. In addition, G&T Holdings agreed to make the following repairs by the end of the month.

• Repair any roof leaks and the disintegrating roof level immediately below the cupola and behind the banisters, as well as recaulking the base of the spire where needed — done

• Repair and restore to working order the M/A light DMX desk, which is defective — not completed

During the meeting, Chalker said a new item has been added. He said on Oct. 1, based on a request from City Manager Joe Scherer, Chalker, Scherer and Councilman Wayne Smith went to the theater and discovered either mold and/or mildew in the main auditorium.

“We are not sure what it is, there are tests you can do for that, we haven’t taken that step yet, we just asked them to remediate that as soon as possible,” Chalker said. “I did visit the theater this morning, and it has improved somewhat, but it has not been remediated yet. There are several recommendations we gave them and they have followed some of those.”

One is the running of the HVAC system at a certain level to keep the humidly and mildew down, of which they are doing, Chalker said.

“There is a mild improvement, but we aren’t there yet,” he said.

Chalker said a vendor has looked at the problem.

“We haven’t received any information back to make an official determination of that, we would need to take samples of whatever is on the surfaces there, and send it off,” he said. “At this point, we don’t feel it is our responsibility to do that, we are just overseeing based on our interest still in the building, but we can certainly make that recommendation to them. They also have asked a local vendor to look at what is going on there, and they may already have that in the process.”

On Wednesday, Beau Petty, Roanoke Rapids Theatre manager said, “We have already had several folks in there that will be remediating the mildew in there. We take care of that building the best we can and need it to be in the best shape it can possibly be. The maintenance of that building is important to us. The gentlemen, Carey Turman, who handles our maintenance is one of our most valuable employees and he treats it like it his own, and takes very good care of the building.”

Chalker added, there was a similar tiny problem in the past and the theater maintenance staff responded to it immediately.

When asked if the city was funding the repairs, Petty said, “No.”

“We’ve spent quite a bit of money maintaining that building the last two or three years,” he said.

In other news, a rezoning request was presented by Kelly Lasky, Planning & Development director, from Wilbur Taylor Crawley Jr. The request was made on March 3, she said.

“Shortly thereafter the COVID crisis effected us and our abilities to have meetings,” she said.

The planning board held a meeting in September, providing a favorable recommendation for the requested rezoning, Lasky said. The property, located at the intersection of N.C. Highway 125 and American Legion Road, has four different parcels, she said, with the R-40 residential/agricultural classification. The request is for B-4, commercial, which is consistent with the other B-4 parcels adjacent to it, she said.

A public hearing on the rezoning request, scheduled to take place during Tuesday’s meeting, was opened and tabled until Nov. 17.

In other news, Councilman Smith brought up the communications tower.

Scherer said, that was the city’s initial impression in talking with the insurance carrier, Tokio Marine.

“But since then, their inspector, a forensics engineer, came and looked at the tower,” he said. “They came and did a non-destructive test on the tower and unofficially they feel there is not as much damage there as the report we initially had indicated. But we still have not received their final report yet. They seemed to have changed their tune.”

Smith asked what liability the city will have in the repair.

Scherer said he had talked to Davis, and that is a question for him.

Davis said, at this point the city has done as much as possible.

“And certainly, if the carrier [Tokio Marine] has made that decision, that’s their decision to make,” Davis said. “I talked with Mr. Chalker today about the steps we need to take to firm that up and get some kind of opinion in writing from them, and once we have that I feel we can rely on that.

“In their defense, it seems like they have actually gone and done testing and verifying that in their estimation, it [the tower] doesn’t need to come down. I’m not a structural engineer, I can’t make that decision, so I have to rely on that and I think the city can rely on that.”

Chalker said the lightening damage from last month brought damages so far, without the tower, in the amount of $21, 282. That part of the claim is going well, he said.

“We have communicated this to the insurance company,” he said. “They have received invoices where we have actually purchased these items and we are awaiting for them to send us a check for that amount to cover those items, which are clearly covered by our insurance policy.”

Chalker added, that on the list, there is a lot of ethernet switches and other communication sources to such items as two-way radios, computers and printers.

Smith asked what the city was using for communication since the tower cannot be used.

The tower is in use, Chalker said.

“It is a very viable tower, we use it every day,” he said. “We have one engineer who says the tower is damaged, then we have the insurance company that has told us orally, their engineer says the tower is OK. As the city attorney stated earlier, we are waiting on the other engineer to report with a little more facts, and hopefully some results and outcome of their nondestructive testing, as the city manager alluded to.

“There are three antennae on that tower at 115 feet elevation. There are also two other antennae/transceivers and we were just about to add a third to the fire department, which sends out signals in other directions for our network and it allows us to link buildings without wires. If the tower stands, we are going to put this third antennae up and Chief [Jason] Patrick will not have to pay for monthly internet service. That will come from the City Hall fiber internet fee.”

Scherer said the carrier [Tokio Marine] is the liability carrier for all the city property. “However, we can also look at going out for proposals for other carriers if we feel we aren’t being serviced appropriately by this carrier,” he said.

In economic development news, Christina Caudle, Main Street Development director said, “We have some exciting stuff happening on the Avenue despite the COVID craziness over the last several months.”

The Avenue Station Lofts at 632 Roanoke Ave. are now pre-leasing the 10 apartments, with one unit leased; O Aeotos, at 1011 Roanoke Ave. will have a soft opening for dine-in service on Friday and Saturday; and The Mill Coffee & Eatery, at 1020 Roanoke Ave., is anticipating a soft opening in early November, she said.

“Make sure you check those smoke detectors, and make sure you practice good cooking safety all year,” he said.