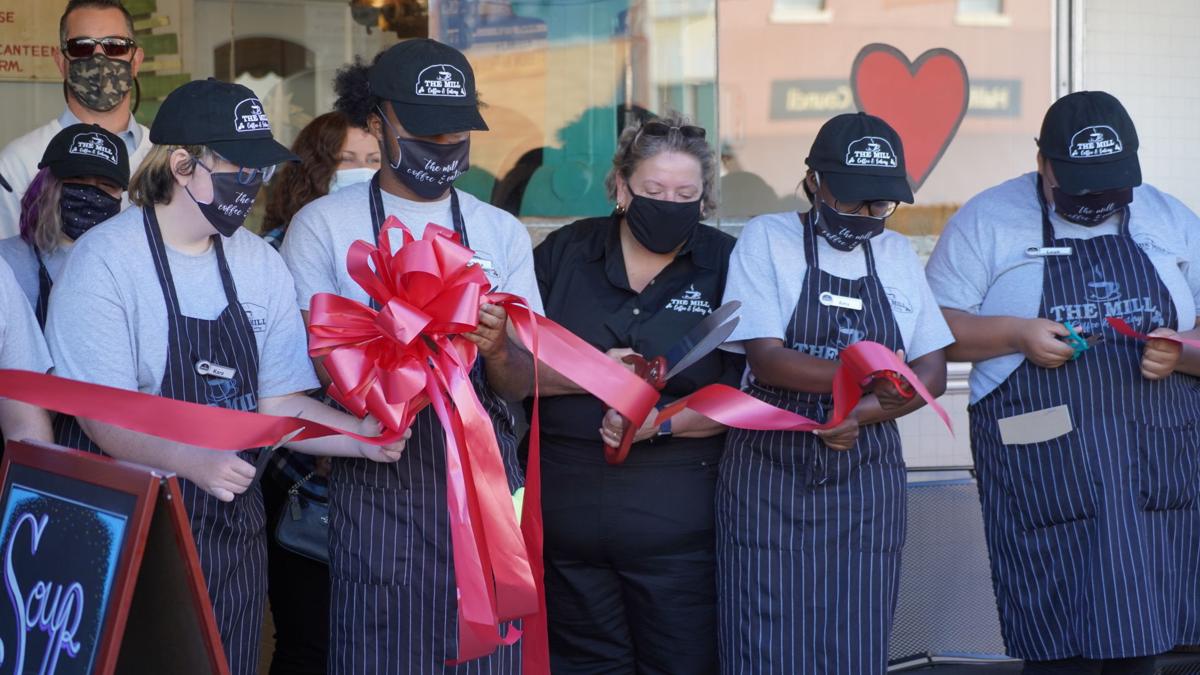 Melissa Harris, owner of The Mill Coffee & Eatery, joined her employees in a ribbon-cutting ceremony on Wednesday. 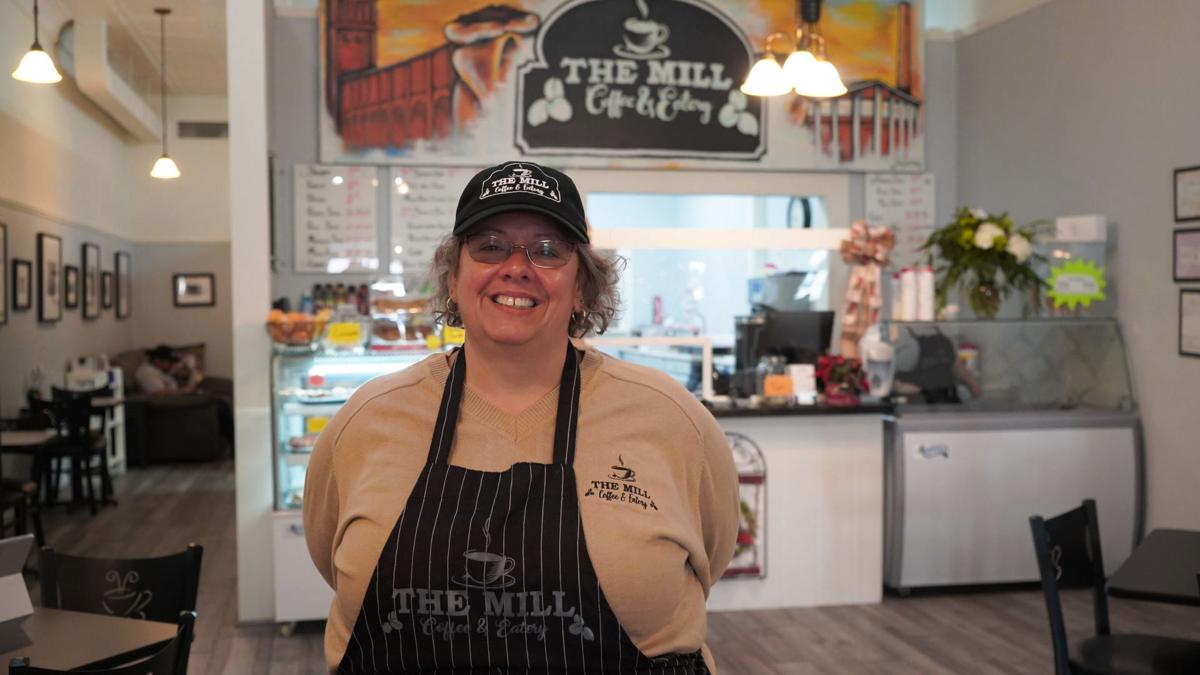 Melissa Harris, owner of The Mill Coffee & Eatery, talked about her new business on the Avenue. 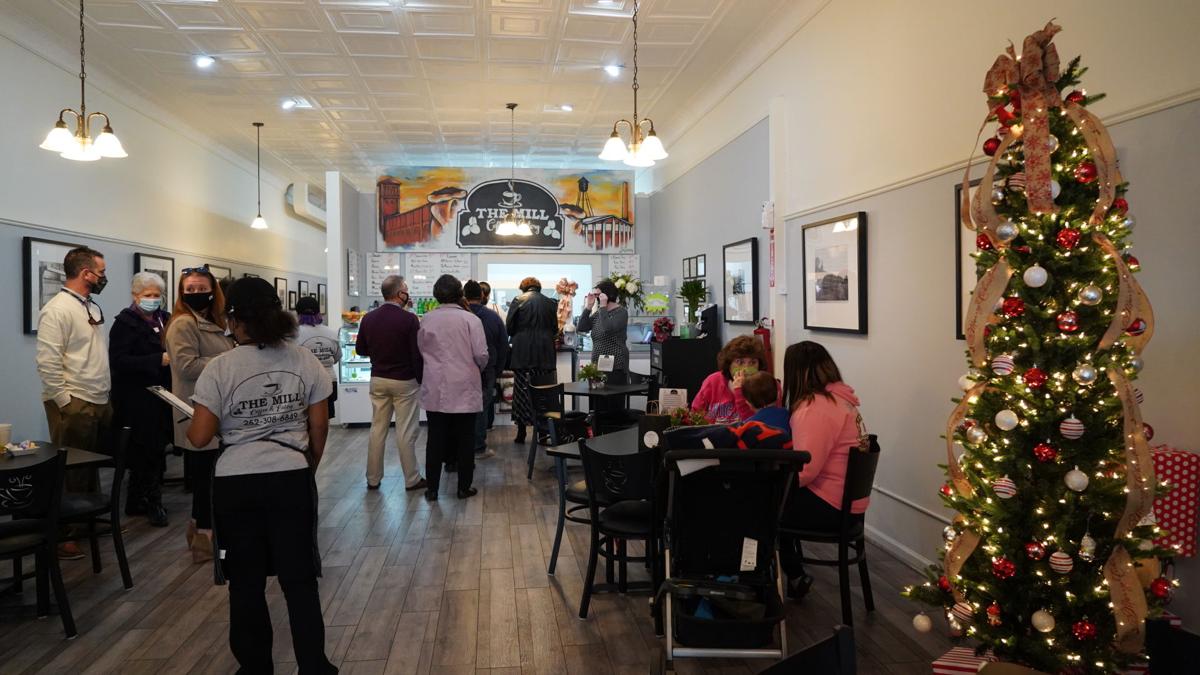 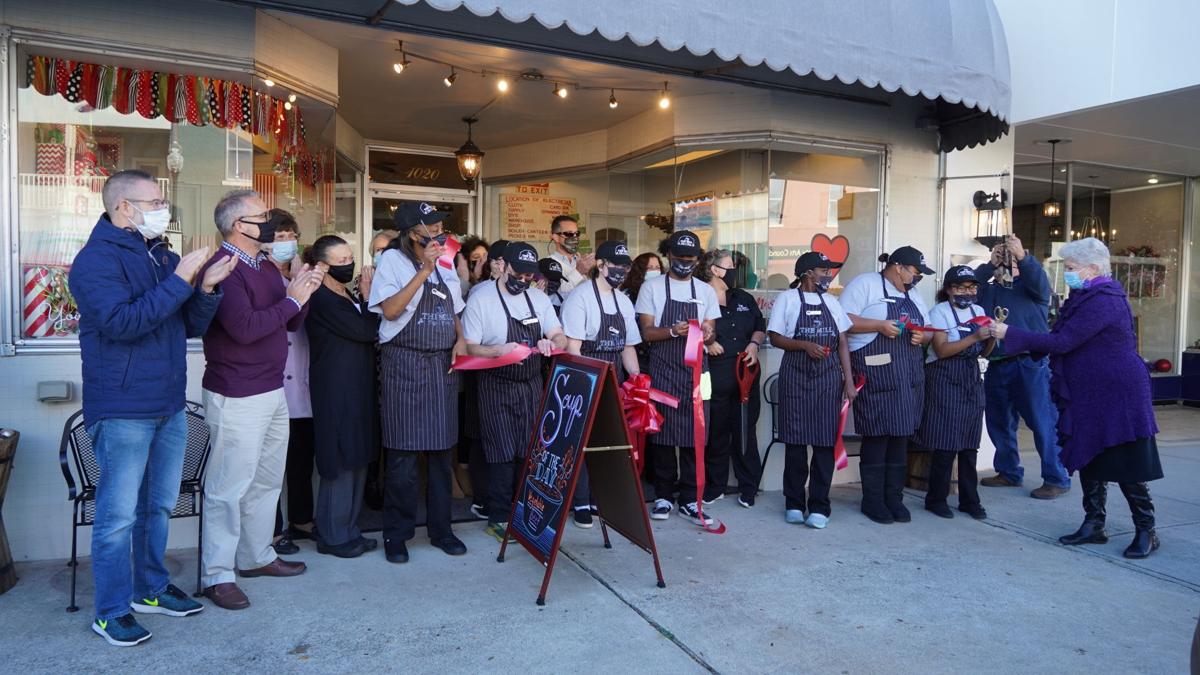 The community and others joined in a ribbon-cutting ceremony Wednesday at The Mill Coffee & Eatery. 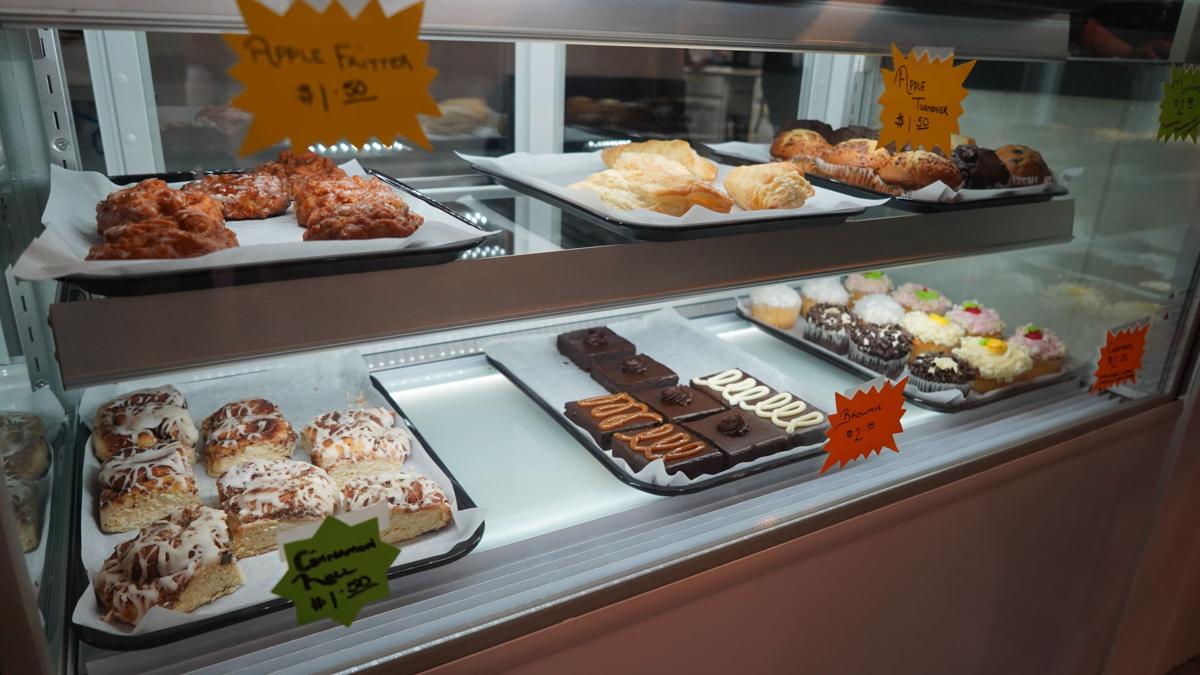 Pastries filled the display of The Mill Coffee & Eatery on Wednesday. 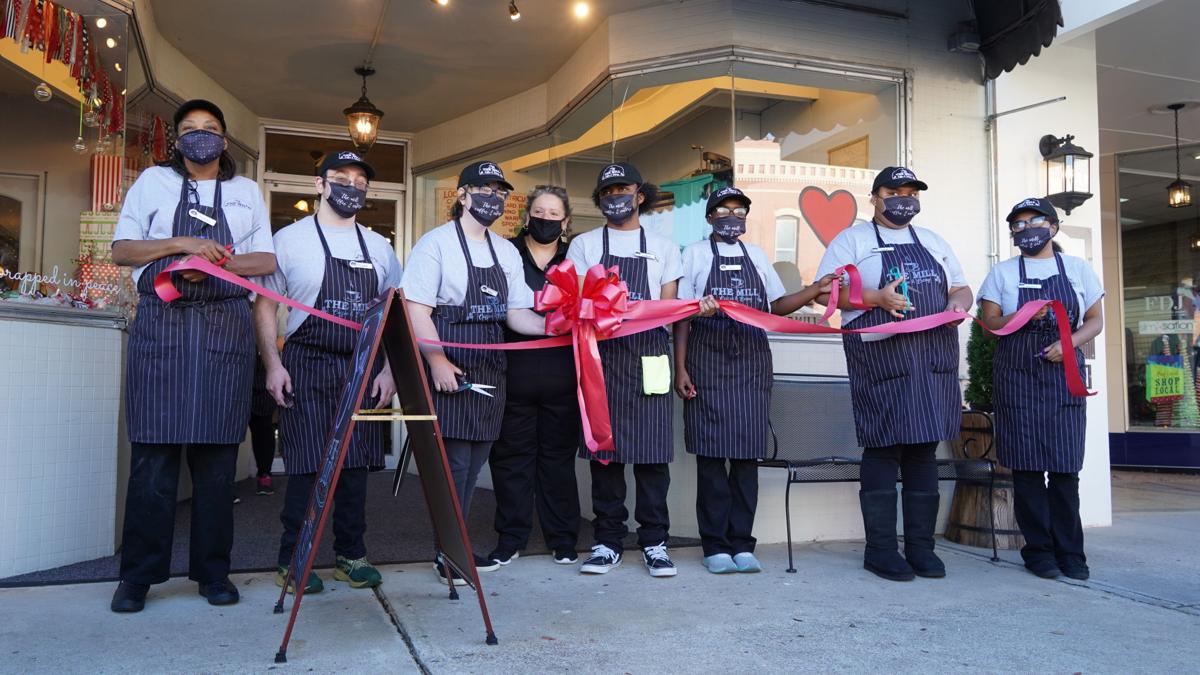 Melissa Harris, owner of The Mill Coffee & Eatery, joined her employees in a ribbon-cutting ceremony on Wednesday.

Melissa Harris, owner of The Mill Coffee & Eatery, talked about her new business on the Avenue.

The community and others joined in a ribbon-cutting ceremony Wednesday at The Mill Coffee & Eatery.

Pastries filled the display of The Mill Coffee & Eatery on Wednesday.

ROANOKE RAPIDS — The Mill Coffee & Eatery was packed with customers on Wednesday for its grand opening.

Shortly after a ribbon-cutting ceremony, the doors opened to what used to be Timeless Tea, to a sit-down coffee shop with a touch of history from a time when the mills were the staple of the area.

“We’re right here in the historical part of the Avenue, and it was just fitting to pay that tribute to the Roanoke Valley,” she said. “Unfortunately, the younger generation, they wouldn’t have a clue because the mills were gone. This is what made Roanoke Rapids, and so that’s why I wanted to honor it.”

The Avenue was not without a coffee shop at one time, but with more businesses popping up and more foot traffic, Harris said she heard there was a need for a coffee shop.

“I’m proud that the Avenue is picking up with businesses and that we’re part of that,” she said. “I’m also glad that we can provide a service for the local merchants instead of having to hop in their car and go across town to get something.”

On top of serving coffee, the shop offers a variety of items such as milkshakes, freshly squeezed fruit drinks, tea, hot chocolate, salads, ice cream, sandwiches, soup of the day and more.

But that is not the main mission of the local business, as Harris, who was an exceptional children teacher for 35 years at Roanoke Rapids High School, said her staff is comprised of intellectually challenged and physically disabled employees. She said customers were very complimentary of the staff during the grand opening and how mannerable, friendly and hardworking they were.

“They said that they would have never known that these were intellectually challenged individuals if we hadn’t put it out there,” Harris said. “So, they were talking about how well trained and how wonderful they are.”

She said the majority of her staff have graduated from school, except a senior at RRHS, and the other homeschooled in Northampton County, Harris said. The age bracket of staff members is from 16 and the oldest being 55 years old, she said.

Harris was asked how her staff felt before and after the rush of customers on Wednesday.

“At first, nervous, anxious,” she said. “Especially when they started seeing the crowd of people outside gathering for the grand opening, but once they got in here and got in their different stations, they just didn’t even think about the anxiousness or anything.”

Harris said her staff did their job well, and by the end of the day, they were exhausted, but said they wanted to come back the next day to work.

“This is the first time a lot of them have ever worked,” she said. “First time they’ve ever been on their feet that long. A lot of these individuals are just used to staying home, couch potatoes, watching TV, or just chilling, not physically having to do something.”

A couple of her employees mentioned that they felt good because they were doing things they did not know they could do, Harris said.

“That’s one of the missions for this is to let them know that yes, they can be productive citizens,” she said. “They do have a purpose, and they can work.”

Another added satisfaction for the employees was in the form of a physical paycheck they received instead of a direct deposit, Harris said.

“They were grinning from ear to ear,” she said. “One said, ‘Oh my gosh, I’m finally a paid person now.’ They were ecstatic.”

Though the employees will now have direct deposit, Harris said she wanted them to receive their first paper check to feel the fulfillment of physically earning it. The employees also have a swipe card for clocking in and out of work, she said.

“They’re so proud to come in with that swipe card because they’ve gone to other places and seen people swiping,” Harris said. “And so, it’s their responsibility, and they have stepped up to the challenge of the daily routine of checking in and clocking out.”

Back when she was teaching, she said she had a philosophy to treat her students as normal as possible to receive the same treatment. Harris said that the same philosophy is implemented at the coffee shop.

“You are a regular employee,” she said. “The rules are the same as if you were not intellectually challenged, and they stepped up to the challenge.”

Showing up for the grand opening was Roanoke Rapids Mayor Emery Doughtie, who said Harris used to teach his daughter.

“This building has got a lot of opportunities, and I think she will maximize that opportunity,” Doughtie said. “It’s really good to see a local business come, and I think that this type of business will increase some foot traffic on our Avenue.”

Halifax County Commissioner Linda Brewer also attended and said it is wonderful to have local businesses come to the area.

“We want our local people to support local business,” Brewer said. “It’s a beautiful facility, and what a wonderful place to come have lunch or just have coffee with a friend.”

“That’s always a win,” Caudle. “This is something we’ve needed for a while, a place where you can come get a cup of coffee and a muffin in the mornings, simple soups and sandwiches. It fits a great need.”

With the success of the grand opening, Harris said once everything is worked out and flowing nicely after a month of opening, they will offer a delivery service within nearly a 10-mile radius.

“After a month and after we get our act together, we will be doing free delivery beyond right here on the Avenue,” she said. “We’re also offering if businesses have to have a working lunch. We can make a box lunch and take it to them.”

Harris said that she is always looking for new employees and has made it a mission not to interfere with their disability checks.

“This is not to make them rich,” she said. “This is just to give them a purpose in life. With that, they’re limited to how many hours they can work or how much money they can make in a month. That is a plus to me because I can hire more individuals than, say, a normal business. I’m reaching out to try and get as many as I can to give them that purpose — to give them something to do.”

Harris said anyone who is intellectually challenged or physically disabled and is interested in working, should contact her or someone who is affiliated with the Vocational Rehabilitation Services.

“If they just want to come in and volunteer at first and see if it’s something they’re interested in doing, we do that too,” she said.

The Mill Coffee & Eatery is located at 1020 Roanoke Ave. For more information, contact 252-308-6849 or visit themillcoffeeandeatery.com.