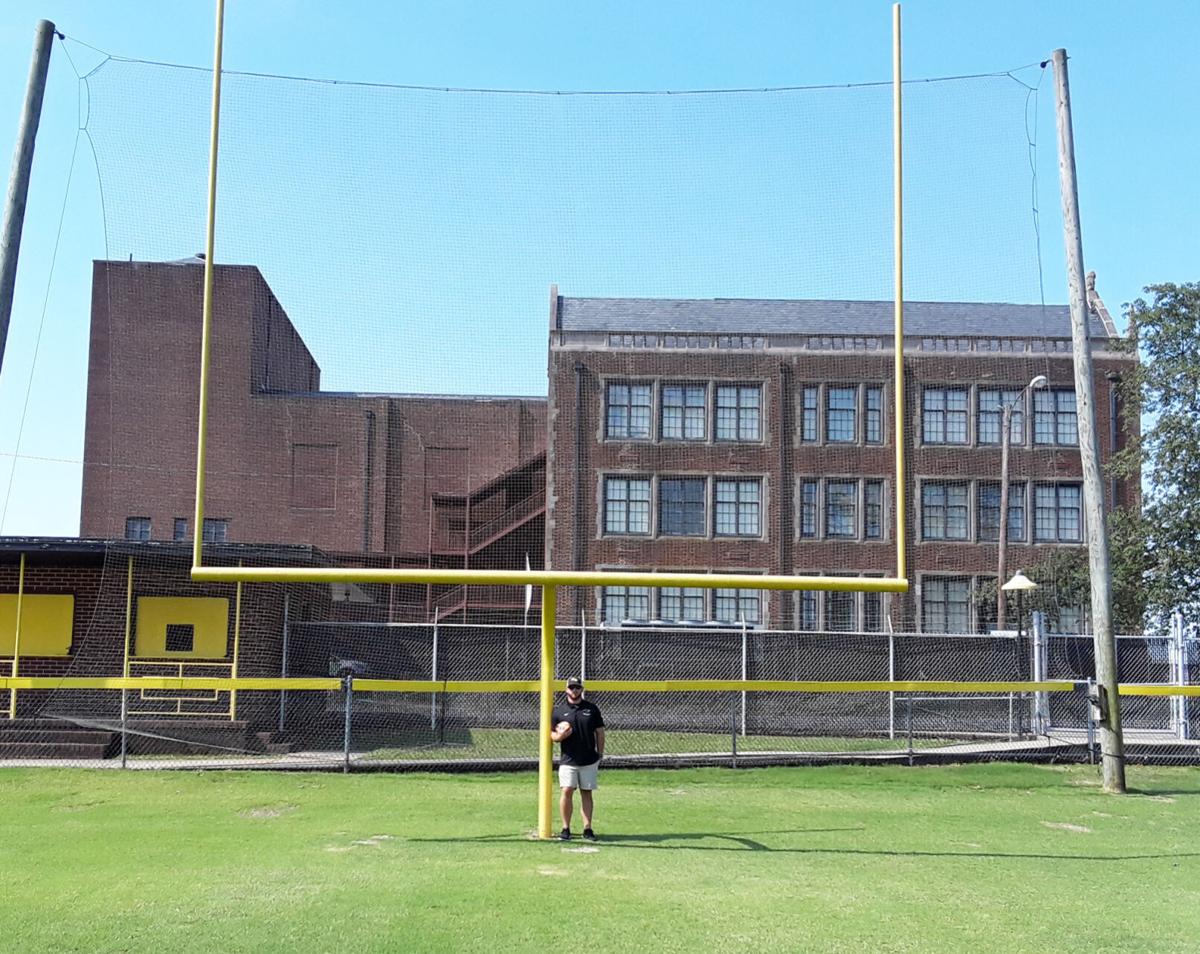 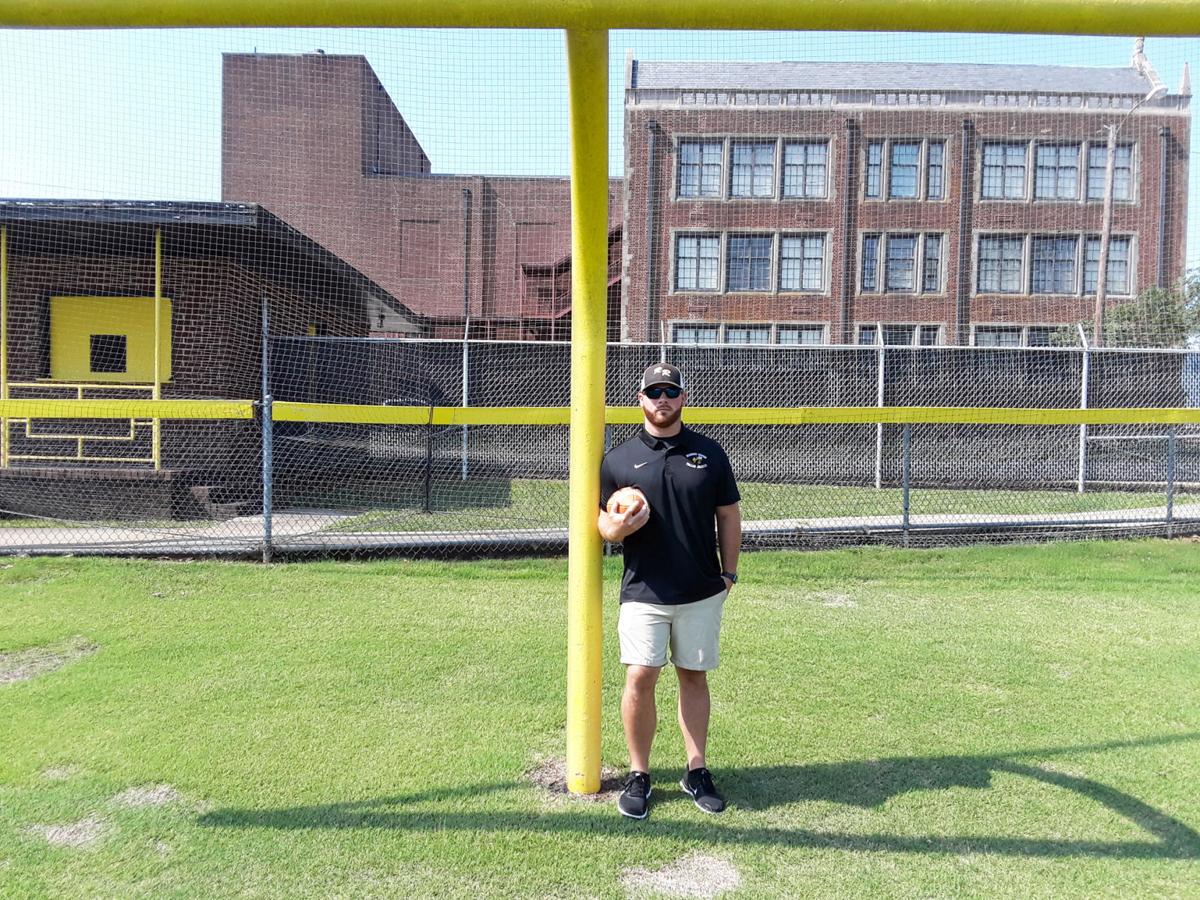 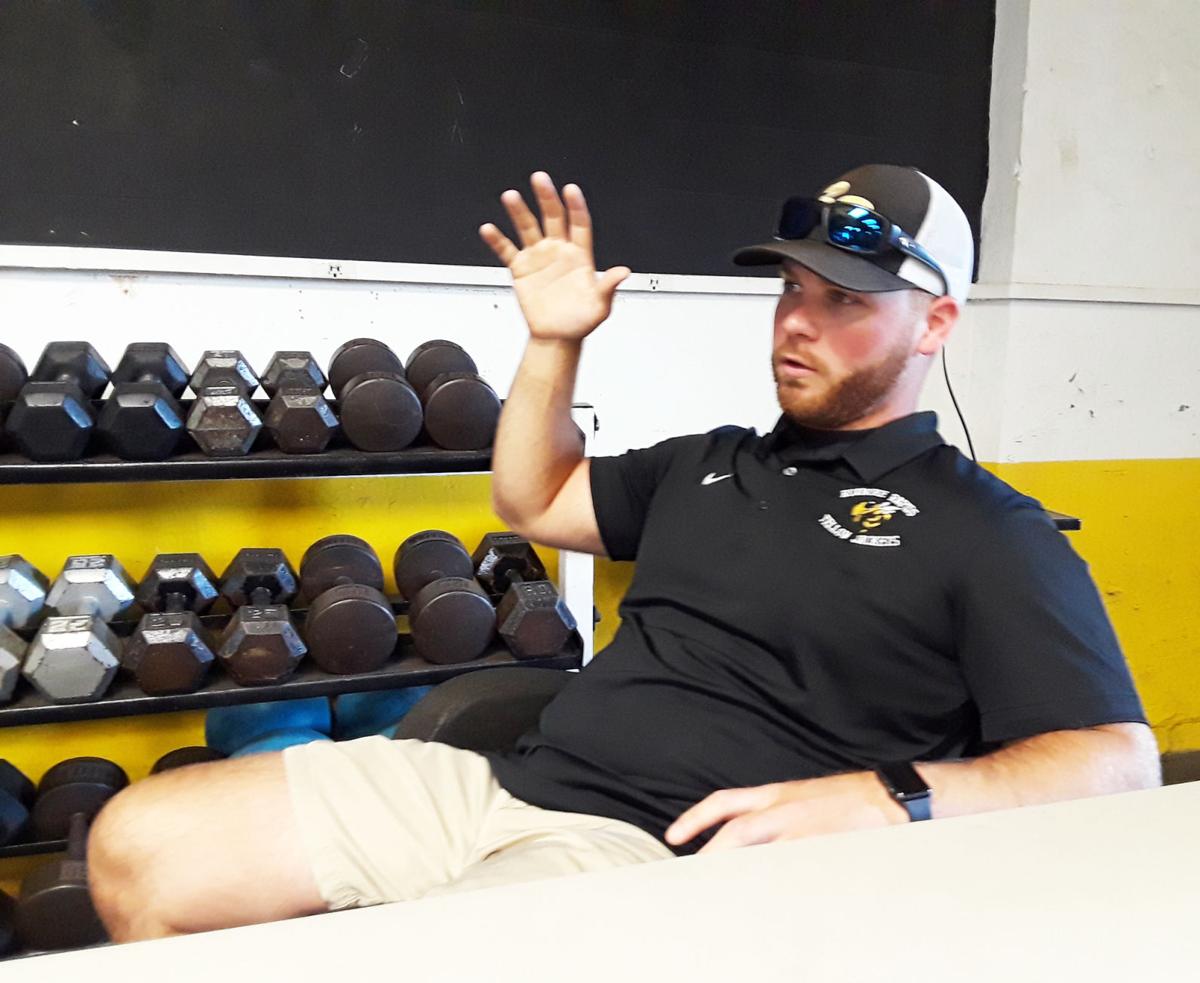 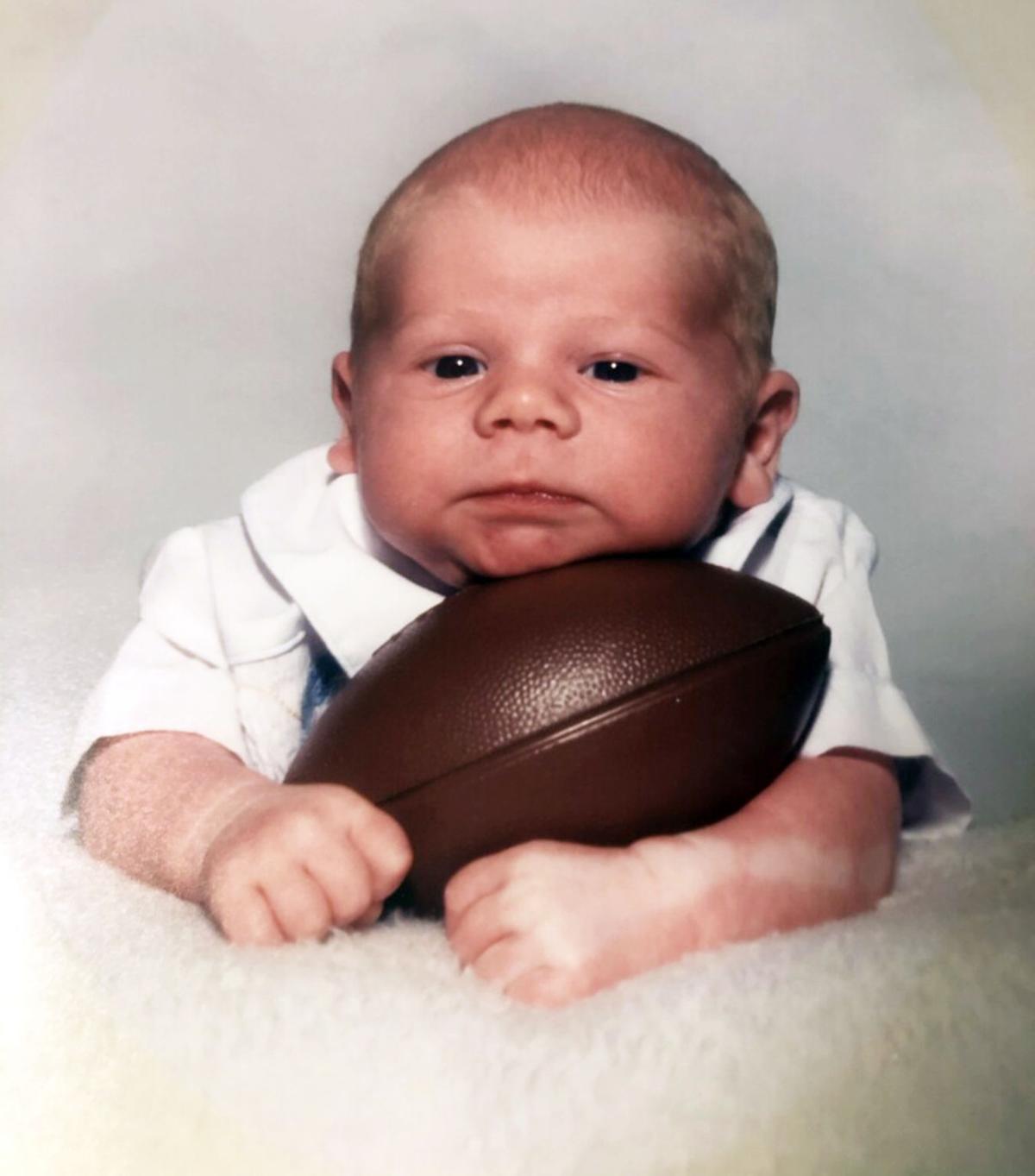 Chris Lyons said, “Football has been my life since I was 6 years old — as an infant, straight out of my mom’s stomach. I have a little football picture at the house.” 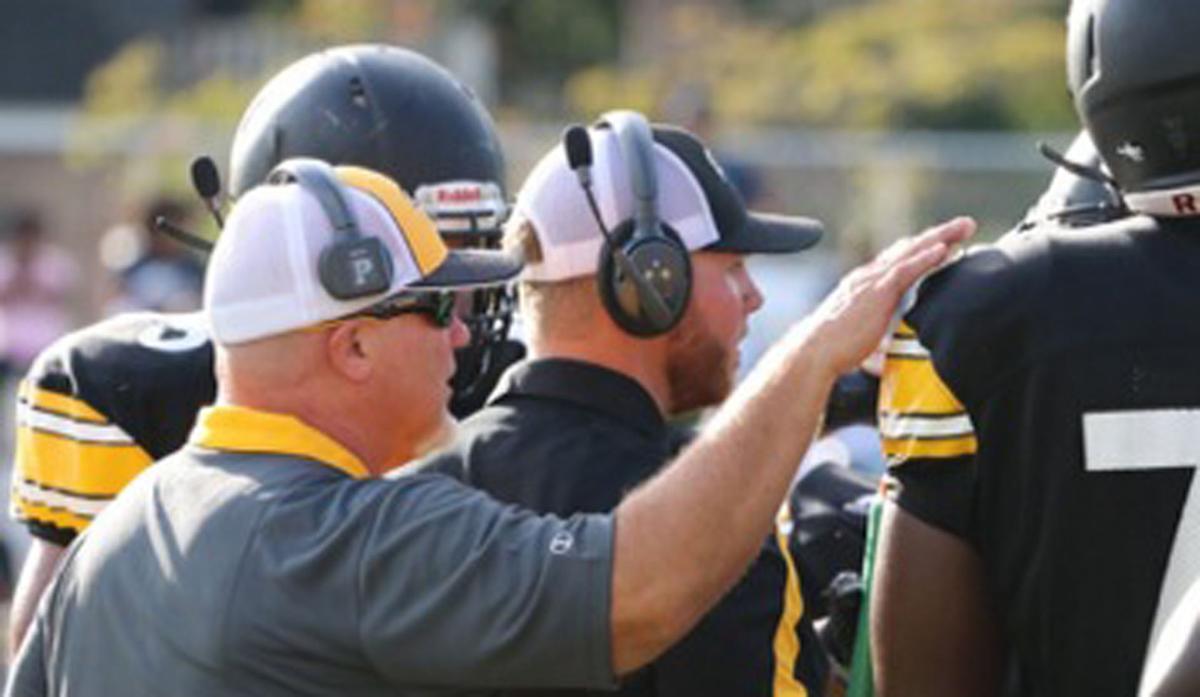 Bob Lyons, left, Roanoke Rapids assistant football coach, and his son, Chris, in front of him, during a previous game. 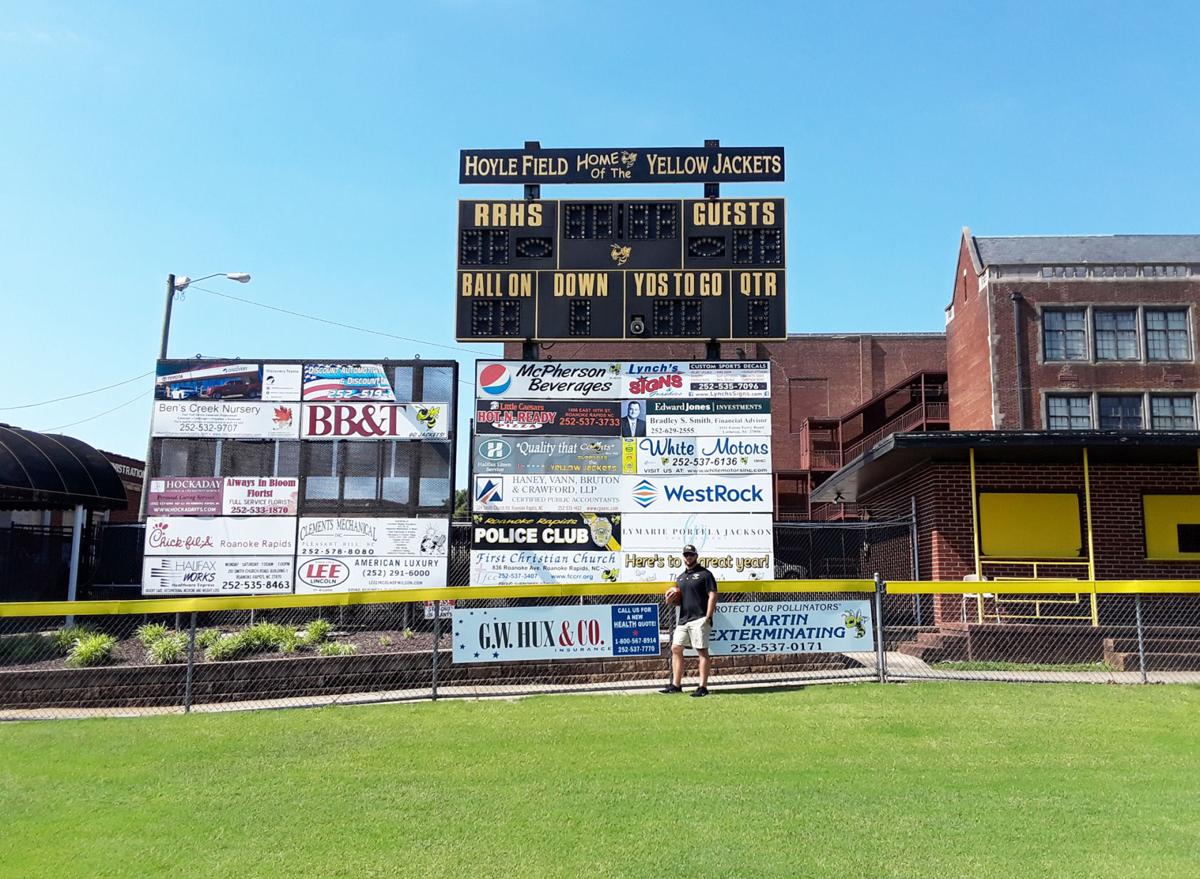 Chris Lyons said, “Football has been my life since I was 6 years old — as an infant, straight out of my mom’s stomach. I have a little football picture at the house.”

Bob Lyons, left, Roanoke Rapids assistant football coach, and his son, Chris, in front of him, during a previous game.

Russell Weinstein said he is getting a little long in the tooth.

He is head football coach for Faith Christian School in Rocky Mount.

“I’m in the short rows now,” he said. “The heat and the time, it gets a little more difficult each year, but I am going as long as I can and continue and look forward to influence young peoples’ lives.”

“Lyons no question put in the work,” Weinstein said. “I can remember telling him before he graduated from high school that he would make a good coach one day, because of his understanding of the game, his ability to make adjustments during the game and to understand things as they happen and before they happen because of preparation.

Chris said Coach Weinstein was his mentor and a big influence on his life.

“Just the way he came in and worked every day and spent his weekends with us,” Chris said. “He lived in Rocky Mount and drove us back and forth to weekend camps, after football games late at night he drove us home and then he would drive all the way back to Rocky Mount. He was very dedicated to his job, we could tell. I’m doing that in my own job — if I become half the coach he is, I will be a damn good coach.”

“I had a very good high school football career and just loved high school and the coaches, and all were such a big influence on my life,” he said. “This is what I wanted to get into when I was about 15 years old.”

After graduating from college, three years ago Chris embarked on his dream, getting the chance to coach and teach at RRHS. He teaches ninth-grade world history and 10th-grade honors civics and economics.

And then his big moment came with a job opening for head coach. Mark Snead, Roanoke Rapids athletic director, said the reason Chris was hired was because it is his dream job.

“As an alumnus of RRHS, the pride and passion for the school, our community and the football job itself in his interview just shown through tremendously,” Snead said. “Being a former player and student he knows the ins and outs of what it takes to be successful here. This is his dream job, we didn’t want someone using this as a stopping stone, but someone who wants to stay. His experience, knowledge of the game and willingness to learn will be a tremendous asset to our coaching staff.”

Chris said, “This is the dream job — this is going to be my life. My fiancee [Taylor Leonard] understands that. We don’t have kids right now, I’m sure that time will come soon, but this will be my life I’m hoping for the next 30 or 40 years.

“There were quite a few faces in that meeting that day, but Chris and two or three other guys were four of the better players at that time in that group,” Weinstein said. “The numbers were really down in the football program at the high school at the time. I quickly figured out I was going to need to play some of those rising ninth graders the very first year I was there. If I am not mistaken, I carried three of the ninth graders, they played varsity football that year in high school, it was Chris Lyons, Justin Rawles and D.J. Epperson.”

Chris said he played baseball and wrestled for a little bit.

“But football has been my life since I was 6 years old — as an infant, straight out of my mom’s stomach — I have a little football picture at the house,” he said. “My mom, Kim, she is a football mom, she’s understood from day one, she’s at all the games, she comes and supports me and dad [Bob], and she’s another big part of this story.

“I was a great baseball player as a young kid, and on all the all star teams, but I kind of focused on football once I got to high school because it was my life. My dad had me lifting at a young age.”

Bob said Chris has been loving sports since he was old enough to start crawling or walking.

“He has always been passionate about it and so have I — I loved what I got from the game, I love the things you can learn from the sport as far as getting prepared for life,” Bob said. “I don’t think I pushed it on him, he has always been gung-ho. He loves sports and has always done very well and exceeded his age, he always played a level up with baseball or football and weightlifting came real natural to him — he was one of the strongest guys in the weight room.”

Bob said he couldn’t be happier for his son.

“I’m very proud of him of course, it has been a dream of his for a long time and something we have been talking about for a long time,” Bob said. “We had a couple years to coach together at Roanoke Rapids.”

For the past three years, Chris was the Linebacker Coach/Offensive Line Coach and Defense Coordinator. With his dad coaching, Chris said Bob will be coaching alongside of him now as an assistant coach.

“That’s a pretty special situation that we get to do that together,” Chris said. “He’s a huge role model and a reason why I’m kinda here doing this.”

Bob said, “We are both very passionate about the kids and everything you get from coaching. I think he’s going to be a great coach, he has so many ideas for the program the kids and the community — we are very excited.”

When asked what makes a good coach, Chris said a good leader.

“Someone who can connect with the kids, someone who is calm during panic situations, someone who knows the game they are coaching,” he said. “Being able to lead young men and lead a coaching staff and becoming successful.”

Weinstein said, through coaching, he has always tried to show the young people even at his advanced age, he still has a passion for the game, for coaching and teaching them to play, seeing them succeed and get better at whatever they do in life.

“I have always tried to build relationships with the players, get to know them the best I can as a person, about their families and the circumstances they come from, it helps me understand the young man,” Weinstein said. “Another thing, the willingness to prepare to succeed — success doesn’t just happen and I tried to teach Chris and all my players, in order to be successful you have to prepare — you have to put in the work, the film work, the physical preparation. Everybody wants to be good, but only those who put in the work and the preparation come out in the top at the end.”

Chris said, the biggest thing they talk about is relationships.

“I have a very good relationship with these kids, where I’m a young teacher but they know I don’t play,” he said. “I can mess around and joke, but also they know they can’t just push me over and they know when it’s time to do some work. It’s kind of like that with the players too, they know I mean business. I have great relationships with these kids, and they also see me as their coach and their friend and that is the big thing.”

When asked why folks should care about sports, Weinstein said sports can be a very positive thing. He said it is great preparation for adulthood and real life. Also, when local teams are successful, it creates a lot of pride within the community — the community members want to have something to support, he said.

“The biggest thing is kids — especially with football — we get a lot of kids who aren’t going to be stars in the classroom and they kind of ride the system,” he said. “I guess with football, they could have something special, so we’ve tried to give them a reason, give them a purpose. A lot of sports build character, and it makes you a better person.”

With COVID-19, Chris said he is trying to be optimistic, but realistically football is going to be the last sport to come back. He said they are supposed to wait until a June 15 deadline for maybe being able to do workouts, whether in the weight room or on the practice field.

“But realistically, football is 22 guys on the field at one time, touching, sweating, spitting, bleeding and things like that,” he said. “This pandemic is bad for football, but we need to get back to normal. We need to get this country and economy going, we need to get football going, and football has a lot to do with the economy, especially at high school levels and college levels.

“In college they make tons and tons of money, but high school, usually football programs are what feeds the smaller sports to be able to survive and get new uniforms and things like that. Hopefully, we can get back to normal.”

Chris said he would like to mention one more thing.

“Coach Mack [Eric McDaniels, RRHS teacher and former head coach] has a huge role in me getting this job,” Chris said. “He was fully supportive of me. We’ve talked and he’s been basically training me for this position since my three years of being here — every big major decision, he always brought me in and wanted to get my input. We had a great relationship and he is a great friend of mine, and even though he’s much older than I am, we still have a great bond, just the respect and love I have for him.”

When asked about McDaniels, Snead said since all personnel issues are private, he cannot discuss anything further other than “He is working with Coach Lyons in this transition and we really appreciate all he did for RRHS’ football program. We hope Chris continues to build on what he did.”

“I just have a very, very good feeling that good things are going to happen going forward with Roanoke Rapids football,” he said.