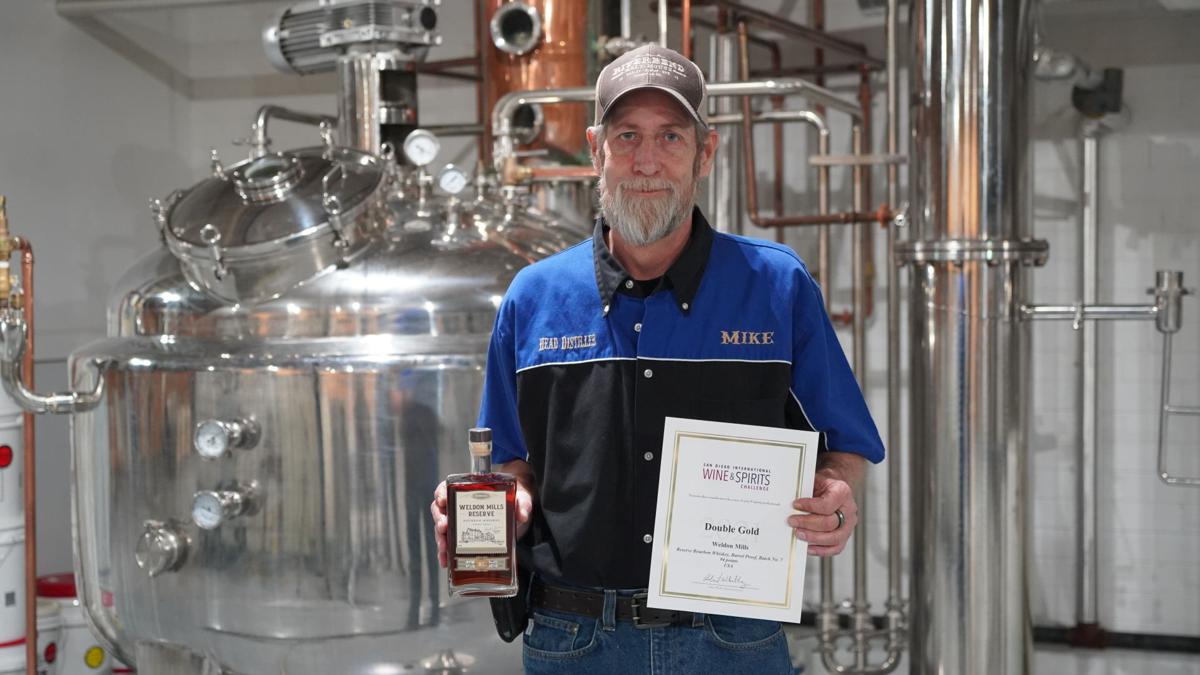 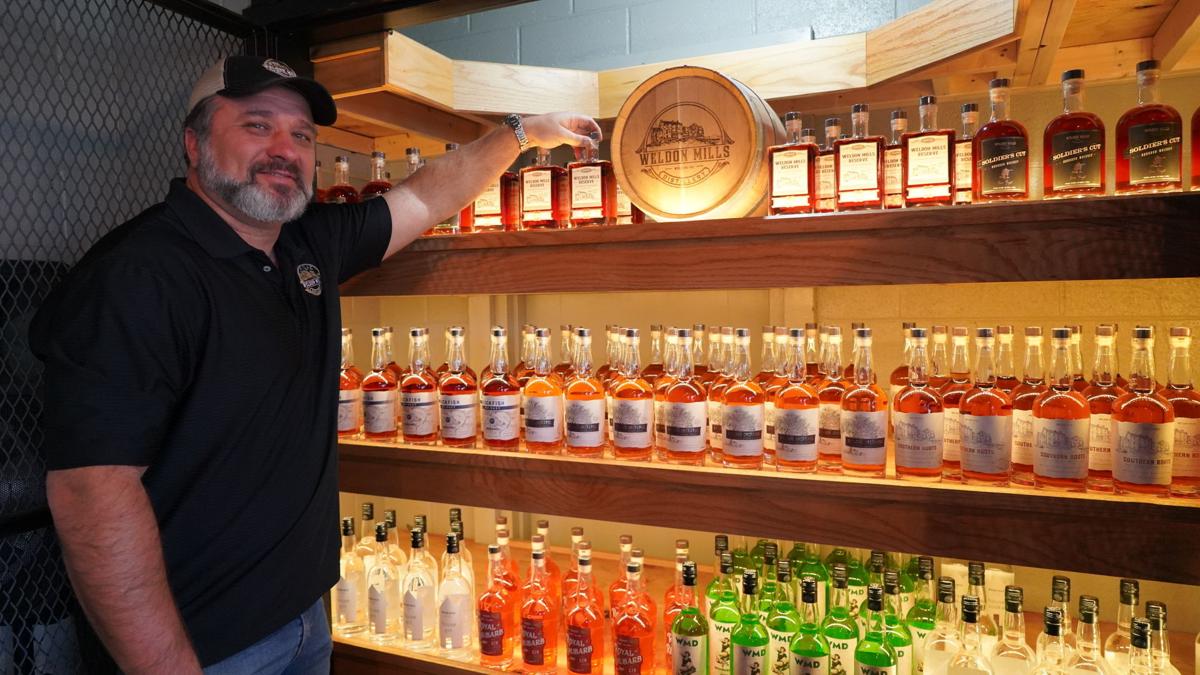 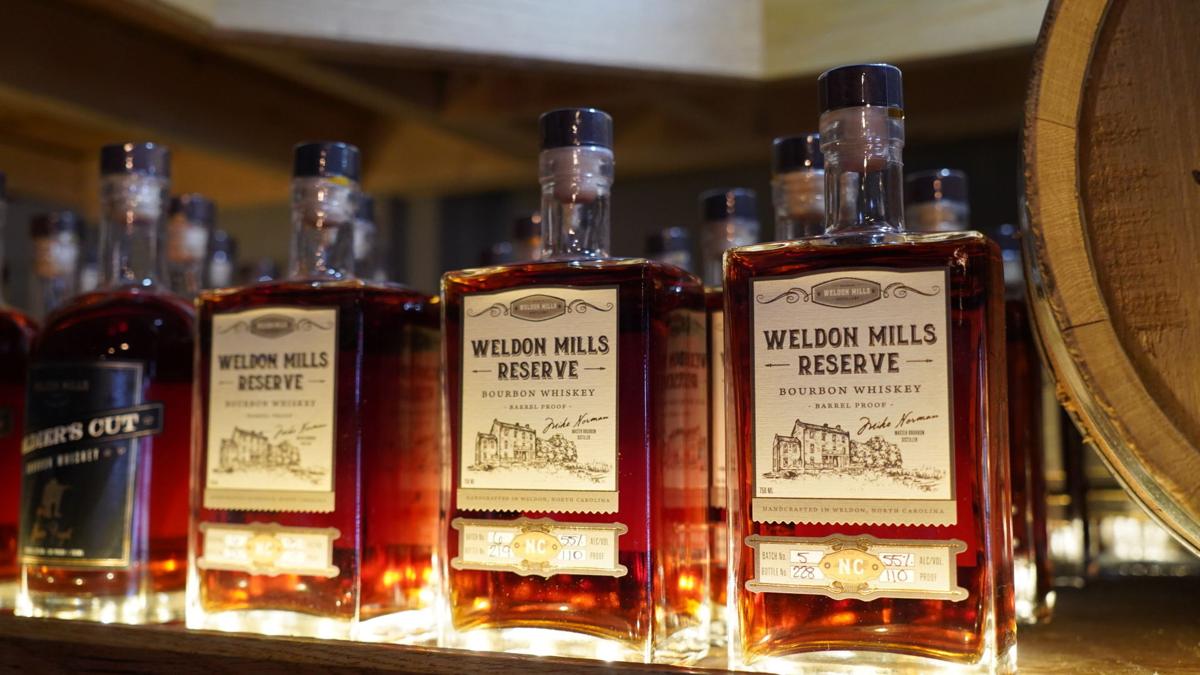 The prized product is of Weldon Mills Distillery, where the business first wanted to offer a barrel proof premium bourbon as part of its lineup, said Co-owner Bruce Tyler.

But the credit for the bourbon’s claim to victory at the event goes to Master Bourbon Distiller Mike Norman, who developed the process and recipe for it, he said.

“I mean, he’s spent a lifetime of making booze, whether it’s in the woods or in a legal distillery,” Tyler said. “It’s a big deal not only for us but for him specifically. We’re just proud of him and proud of the efforts that he’s done. It just shows when you take talent and you allow that talent to just create the end product shows.”

In his area of operation in the distillery, Norman sat relaxing as he was asked how long he had been a distiller.

“Legally or illegally?” he replied with a laugh. “I’ve done it a long time.”

With a total of nearly 20 years as a distiller — a decade legally, under his belt, Norman said he is excited about his first double gold, even after winning gold medals at other distilleries he worked at in the past.

“It’s actually something I made from a recipe that won a double gold,” he said. “A lot of thought went into it. When you’re making mashes, I mean, no matter what kind you’re making, it’s basically the same principle and the same process.”

Norman said he loves what he does to make batches of spirits, and it still amazes him how it is all made. However, he said his method is a different process for making the spirits than the way other distilleries do it. His method is all about mixing the old ways with the new ways, Norman said.

“A lot of the new distillers are people that come out of a chemistry class or went to some kind of moonshine university or something like that,” he said. “Like with the old way, the old-timers made the moonshining stuff with the basic principles of it. You need to mix in some of that old-school way of doing it in with the new stuff. I still do it the old-school way, but I got better control over it with the kind of equipment we’ve got.”

Norman said his work is like mixing art with science.

“I look at myself as an artist really when doing this stuff because I get into it,” he said. “I talk to my mashes, I baby my stills — I mean, it’s just me. I can’t see myself ever doing anything else.”

Norman said Tyler allowed him to have full creative control over the process.

“Everywhere else, I had to do what they wanted,” he said. “Here, he gave me full reign over all this over here so I’m actually getting to do what I wanted to do for years, and he made that all possible so I could do it.”

Tyler said when businesses do not stifle an individual’s creativity, the end product will show.

“Let them do what they do,” he said. “A lot of times in business, egos can get in the way. I check my ego at the door.”

The bourbon is not the only spirit that brought home a medal, as the distillery’s Royal Rhubarb Gin took the silver medal as well. Either way, it is safe to say the Weldon Mills Reserve Bourbon Whiskey has made its mark with recognition and not only highlighted Weldon but also Halifax County in North Carolina.

Tyler said whenever a spirit wins best in category in a big competition, it is a big deal for the distillery and the state. N.C. has a deep history in producing fine spirits — and the state had more distilleries than any other state in the Union prior to the prohibition, he said. Prohibition crushed the legal spirits production industry in the state, but N.C. laws are changing to allow a more friendly environment for distilleries, Tyler said.

Now with Weldon Mills Distillery’s products on the shelves of ABC stores in the area since the late half of last year, Tyler said it is very exciting to see their products out there. It is a special experience to have friends and family purchase across the state, he said.

“Opening a distillery in the middle of a pandemic has been very challenging,” he said. “We have been very limited on how we can make the public aware of the quality of our products. Specifically, we have not been able to do off-site tastings at ABC stores and festivals.”

“With most bars and restaurants closed or operating at limited capacity, we need folks to go to that North Carolina section at the ABC stores, this is how the N.C. distilleries will survive,” he said. “So please — buy local.”