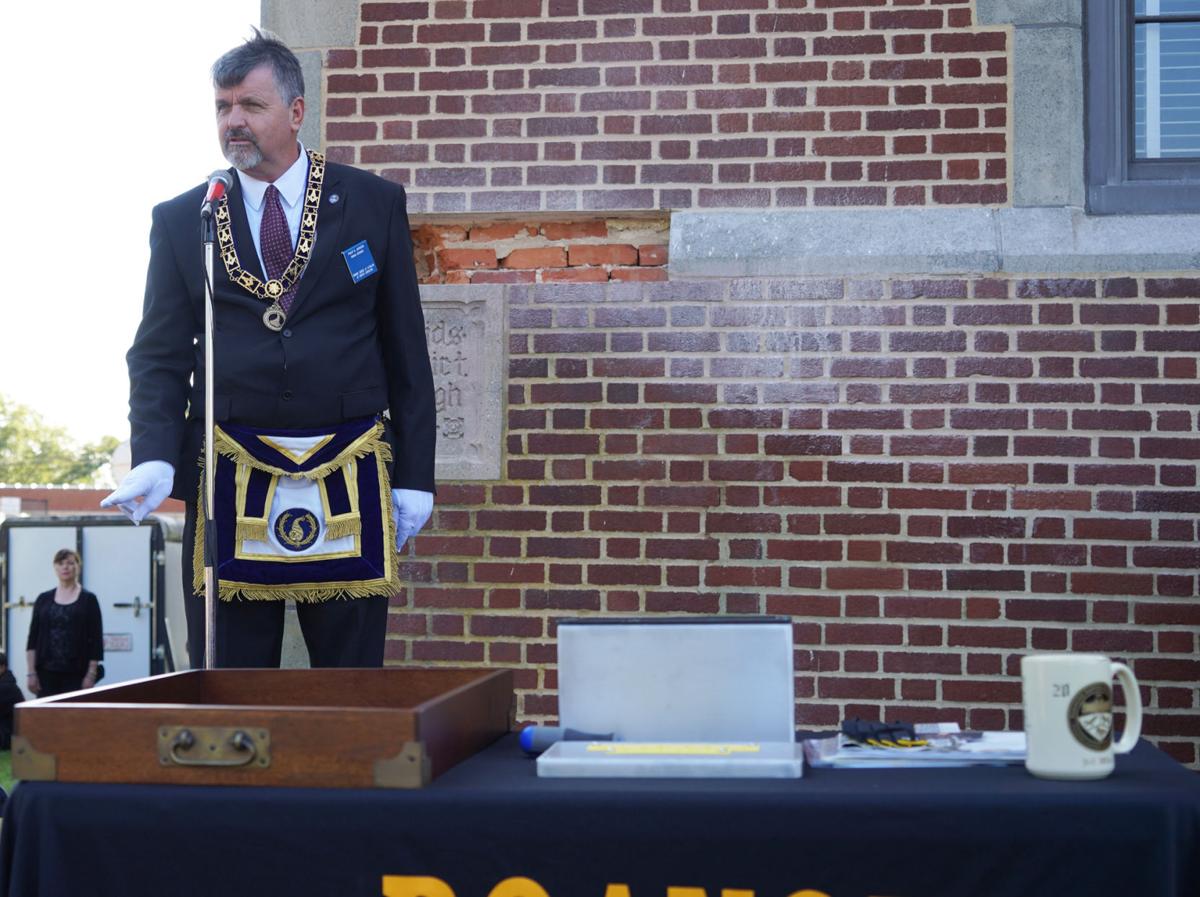 Grand Steward Philip R. Johnson with the North Carolina Grand Lodge of Mason said during the time capsule ceremony, “By authority of the most Worshipful Grand Master, I am now command and require all here assembled preserve silence and to observe due order during these ceremonies. I make this proclamation to the south, to the west and to the east.” 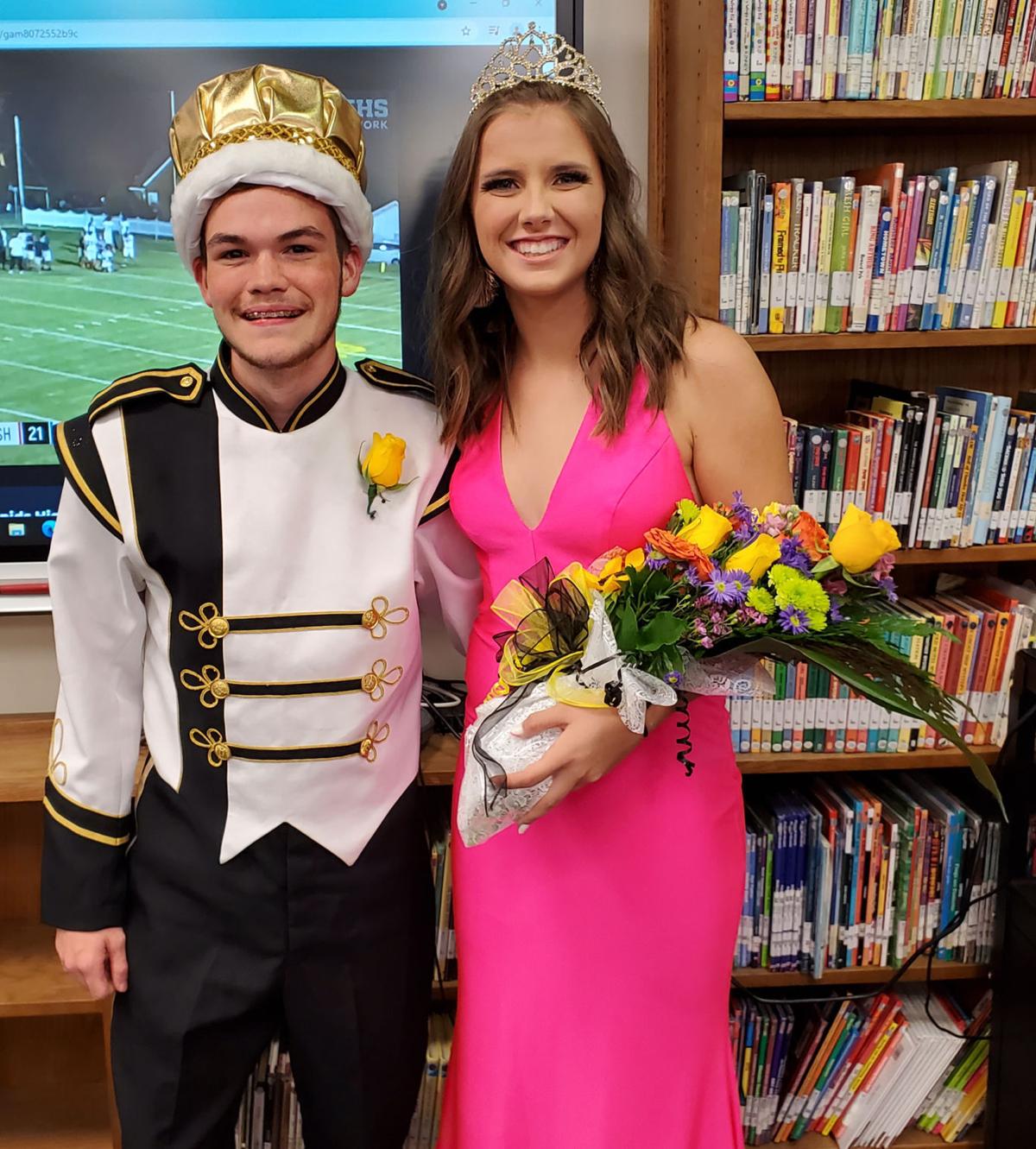 Grand Steward Philip R. Johnson with the North Carolina Grand Lodge of Mason said during the time capsule ceremony, “By authority of the most Worshipful Grand Master, I am now command and require all here assembled preserve silence and to observe due order during these ceremonies. I make this proclamation to the south, to the west and to the east.”

There has been months of build-up for the 100th anniversary for Roanoke Rapids High School, and it finally happened last weekend.

I was so very excited about the celebration and had plans to participate in the Roanoke Rapids Choir Alumni Concert, but that didn’t happen because of a sinus infection.

But I was still not going to miss the Oct. 1 Homecoming football game on Oct. 1, and purchased my tickets Sept. 30 so I would be set for the game.

Henry, my fiance, was looking forward to the game as well, and we arrived before 6 p.m., stopping to take pictures in front of RRHS. We chose to sit in the bleachers toward the top, right under the press box.

It was fun watching the former RRHS Homecoming Queens being introduced — some even still had their crowns. At halftime, the new Homecoming Queen and King were crowned — seniors Cameron Neal and Caleb Browder.

Who would have thought that this 1986 graduate of RRHS would actually know the King who was crowned, but Caleb works right across the street from The Herald at The Mill Coffee and Eatery.

I walk across the street to grab lunch there on a weekly basis and have interacted with Caleb many times. He is the nicest, most respectful young man you could meet, and I think the students of RRHS definitely got this one right. I was very proud and happy for Caleb.

Even though our team lost that night, it was still so much fun and brought back many memories. I told Henry I used to sit right beside the band when I was in high school. He called me a nerd, but it was so much fun. I remember dancing in the stands during the games and interacting with the cheerleaders — great memories of my time at that school.

The more serious of the celebration was on Saturday when the ceremony was held to open the 100-year-old time capsule. We arrived Saturday morning, the stands that were set up were full, so we stood near the front door of the school to watch this important ceremony.

I have been anticipating this for months and our newsroom produced a special commemorative edition which was to be placed back into the time capsule to be opened in 100 years — long after I’m gone.

Fortunately, News Editor Richard Holm was covering the event and I was able to find out more of what was said after the fact because I couldn’t hear most of the ceremony.

I was so disappointed standing there straining to hear what was being said because those in attendance who were not sitting in the stands were talking all around me, and kids were running around playing.

I was so sad and slightly angry. If you take the time to come to something this important, be quiet and listen. Teach your children the importance of when to be quiet and when it’s OK to play.

Maybe it’s horrible of me to climb up on my soap box, but not really because I was vindicated in my thoughts. At one point a child was quietly standing beside me, and finally he leaned over and whispered, “They are being disrespectful.”

I whispered back, making sure I heard correctly, “What did you say?”

I thought to myself, wow, this kid!

I said to him after he told me he was 10 years old, “I am glad you recognize that how they are behaving is very disrespectful. You should be proud of yourself.”

I wish I could have met his parents so I could tell them what a great kid they had. There’s still hope for future generations when a 10-year-old kid knows how to behave better than some adults.

After the ceremony, I walked up to see the contents of the time capsule and couldn’t help but tear up seeing the old paper — the paper I have worked with for most of my adult life — placed there.

In 100 years they will open up the time capsule again and see the old paper and the new one from 2021 with my name on page A2 as the editor — this 1986 graduate of RRHS — who stuck around because she loves the Roanoke Valley.

Roanoke Rapids is where she was born and was raised properly by some great parents and who continues to be the best, most respectful person she can be.