A plane with an American flag flew over the crowd by Jennette’s Pier at Nags Head on July 4. 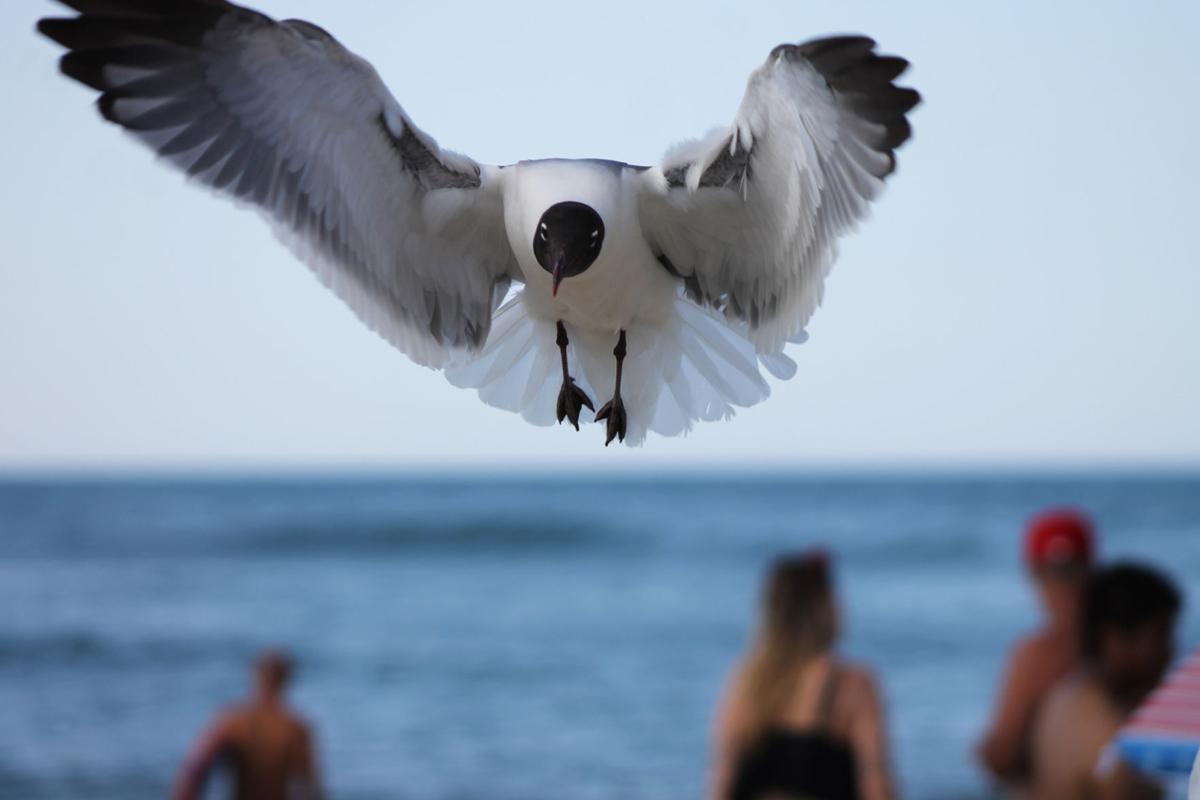 A seagull is shown on July 4, looking for food at Nags Head.

A plane with an American flag flew over the crowd by Jennette’s Pier at Nags Head on July 4.

A seagull is shown on July 4, looking for food at Nags Head.

For the last year, I have longed for ways to escape from the reality of life. COVID-19 was a big part of that, and there was no escaping since everything was closed and I had to work from home.

Reality lately has been some local postings on Facebook about loved ones who have passed. The building collapse in Florida story has continued and it truly hurts my heart to read the stories and know even after more than two weeks, so many are still missing.

One such story is of Cassie Stratton, who has not officially been confirmed dead, but whose husband, Michael, said friends and family had accepted “the loss of a bright and kind soul with an adventurous spirit,” according to an Associated Press story. He was talking on the phone with his wife right when the building collapsed, and she described that it was shaking before the phone went dead, he told Denver’s KDVR-TV. She also told her husband “the pool is caving in” before the building began to shake.

Then there’s the story of sisters, Lucia, 11, and Emma Guara, 4, who according to the AP, were so tiny they were placed in the same casket. They were buried alongside their parents with their white coffin draped with innocent pink and purple ribbons.

Rescue workers are now focused on finding remains instead of survivors in the rubble. They paused briefly atop the pile Thursday to mark the two-week anniversary of the disaster but said they had no plans to pull back during the recovery effort.

As of Thursday, the death toll rose to 64, with another 76 people unaccounted for. Detectives are still working to verify that each of those listed as missing was actually in the building when it collapsed.

I don’t know these people. I don’t know the families who have lost loved ones or who are still hoping — but it still gets to me every single day. I could not imagine being in that position, and being in the newspaper business it’s unavoidable to see the bad news.

When I used to take a few days off, I would still check my email and Facebook pages, just to see the news and if I am missing something I should know about.

But a vacation is supposed to be a break from your normal life, so I have stopped that “still kind of working” mode and have tried to enjoy the breaks for real.

I think living a year with COVID has changed my thought process — life really is just too short not to enjoy those happy moments! Fast forward to now and things are opening back up and if you are vaccinated, which I am, most places you don’t have to wear a mask.

Me and my fiance, Henry, have “gotten away from it all” more than usual this year, and I think it is because we were for so long stuck at home. We have already been to Myrtle Beach, South Carolina, once and stayed with friends, and our second trip to the Outer Banks this year we were able to stay with friends.

Usually a trip to the Outer Banks means several of the same restaurants and lots of walking on the beach. This time we only ate out once — hey, we had to have our crab legs — but we did do some thrifting at new places, which is always something I enjoy.

On July 4, we all just sat on the beach and people and bird watched. I did not walk the beach as usual looking for seashells, and I went into the water which I haven’t done in a very long time (I hear the “Jaws” theme in my head.) I was hit many, many times by waves once I stepped into a hole and all of a sudden the water was almost over my head. I would almost get my footing when another big wave would knock me off my feet and try to suck me out into the ocean. All I did was laugh and cover my eyes so I wouldn’t lose my contacts. Henry “rescued” me and decided I had finally had enough. Later I discovered a scrape on my knee where I was dragged along the bottom of the ocean by the waves. I also later found bits of sand, shells and seaweed inside my bathing suit, so I guess I did take a slight beating.

My tradition I did keep though was taking many pictures. Seagulls were fed by our friends and I tried to get them in mid-flight — not an easy task when they are all fighting over food.

Before we left, a plane flew through the beautiful blue sky with the American flag trailing behind. It was beautiful and it reminded me I live in the land of the free, where I can sit on the beach and enjoy life away from the problems of the world — if only for a little while.