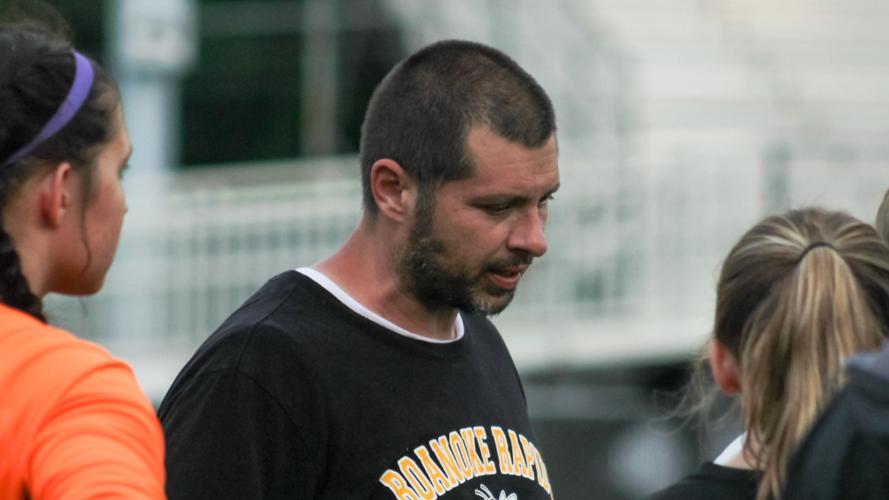 Roanoke Rapids soccer coach Craig Jean huddles with members of the women’s team at halftime of a May 16 match versus Research Triangle. The longtime program fixture successfully guided the outfit through its transition to the Big East 2A/3A Conference this year, going a combined 29-10-2 across the fall and spring seasons. 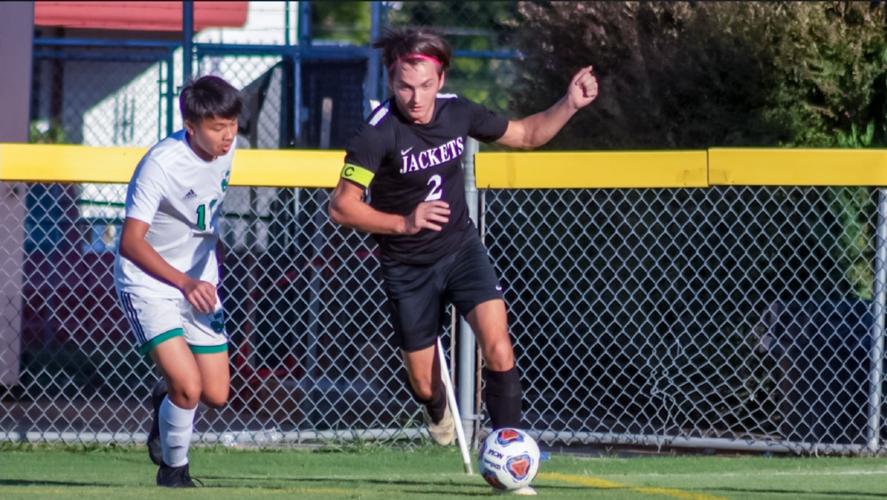 Coleman Neal (2) of Roanoke Rapids controls during a Sept. 2, 2021, showdown against Vance County. The forward enjoyed an outstanding senior campaign, scoring 41 goals and assisting nine others as the Yellow Jackets recorded a 13-6-2 ledger.

Roanoke Rapids soccer coach Craig Jean huddles with members of the women’s team at halftime of a May 16 match versus Research Triangle. The longtime program fixture successfully guided the outfit through its transition to the Big East 2A/3A Conference this year, going a combined 29-10-2 across the fall and spring seasons.

Coleman Neal (2) of Roanoke Rapids controls during a Sept. 2, 2021, showdown against Vance County. The forward enjoyed an outstanding senior campaign, scoring 41 goals and assisting nine others as the Yellow Jackets recorded a 13-6-2 ledger.

In the aftermath of a 9-nil triumph over Northern Nash on April 29, 2021, Roanoke Rapids soccer coach Craig Jean hinted that his program — known throughout the east for its volume-scoring, mercy-rule winning ways — might well be in line for a change in disposition.

After all, the N.C. High School Athletic Association had largely finalized the work of moving its member schools through another realignment phase, which meant the Jackets would be exchanging their Northern Carolina 1A/2A Conference boarding passes for different travel credentials.

As in, ones speaking to life in the Big East 2A/3A Conference — a tradition-rich, all-seasons test rooted in Nash County.

And with pending change, the coach figured, certain difficulty.

Only the black-and-gold never stumbled along its new path, finishing the fall and spring seasons with a 29-10-2 record before landing a trio of players on the N.C. Soccer Coaches Association 2A All-State team, 12 on the All-Region 6 team and 13 on the All-Conference roster.

That’s not to mention Jean, of course, who earned Region 6 Coach of the Year honors for his work this spring.

Yes indeed, it appears the folks on Hamilton Street know a thing or two about life on the pitch — if you like winning, of course.

A mixture of senior leadership and youthful skill, the Lady Jackets (16-4) started the spring in a qualified hurry, winning 10 of 12 matches en route to booking a second-place regular-season Big East finish.

The group also overcame its share of adversity, finding a way to substitute for sophomore midfielder Kamdyn Jean, who missed the last seven contests of the season after suffering a knee injury.

“It’s just a good group of female athletes we got going through the school right now,” Jean said of the bunch, while also praising the contributions of unsung heroes Jennah Gross, Hannah Skinner, Ella King and Susannah Davis. “There’s still plenty left, but that senior group that’s just graduated (has) definitely been special — they’re just so doggone athletic and they compete the right way.”

If anything, one might say the group functioned season-long as the textbook definition of a unified front — one that captured a Big East Conference tourney crown and yielded individual postseason honors for seniors Cameron Neal, Logan Abram, Rylie Wade and Davis, in addition to Skyler Wade, Jean and freshman forward Casey Neal.

Band on the run

Through any lens, the men’s slate was a rough-and-tumble picture, defined in large part by a span of 20 days in October, when the Jackets forged a 6-0-2 mark against the likes of Northern Nash, Louisburg, Bunn, Rocky Mount and Nash Central, thus righting a 6-4 start and clearing the highway for a sixth straight postseason bid.

“We knew we couldn’t lose,” Jean said of the outfit’s daily run-in with high stakes. “It was tough competition, and we were playing right there with it, and taking care of business … pulling out ties, when we couldn’t lose and we had to have it.”

And leading the charge most nights was the senior duo of forward Coleman Neal and keeper Hunt Qualls, which worked diligently to keep Buzz City on the proper side of peril.

In helping the Jackets to a 13-6-2 overall mark, Neal booted home 41 goals and brokered nine others, while the rangy Qualls led the nation in saves, repelling a staggering 381 shots on goal.

Not if you’re asking Jean, who took delight in discussing their work.

“The playoff goal … where he turned the corner from midfield and carried it, like, 75 yards and dunked it,” the coach said of Neal, who netted his 65th career one-timer during a 3-1 setback to Heide Trask in opening-round play of the NCHSAA 2A postseason. “He had so many moments like that, where he just took off from midfield and attacked the whole defense.”

As too did a certain net-minder, whose high-water mark between the rails proved to be an ever-evolving standard.

“Qualls had some crazy saves, dear God,” Jean said of No. 13, who also scored in a wild penalty-kick shootout against Northern on Oct. 25. “Having a goalkeeper that’s so intelligent, that you know, you can let him do his thing back there and don’t have to worry about, you know, telling him every little move, and that kind of thing.”

That isn’t to suggest, of course, that Neal and Qualls were the sole reason for last fall’s prosperity, as evidenced by the play of Balmoris Gonzales, Douglas Merritt and Logan Williams — each of whom also earned spots on the NCSCA All-Region 6 assembly — in addition to Hunter Sparks, who was chosen as a member of the Big East 2A/3A All-Conference squad at season’s end.

Last, but certainly not least

So, dear reader, what gives now, after each team across a year of Big East 2A/3A scheduling has taken notes on the Buzz City way?

In all honesty, probably not much.

Because as long as Roanoke Rapids has Jean, who has guided the program to a 161-61-9 record since 2015, it has what other schools do not — an unassuming, team-first leader dedicated to the prep player’s full developmental cycle, and the many highs and lows associated with it.

It’s chess, not checkers, and the results speak for themselves.