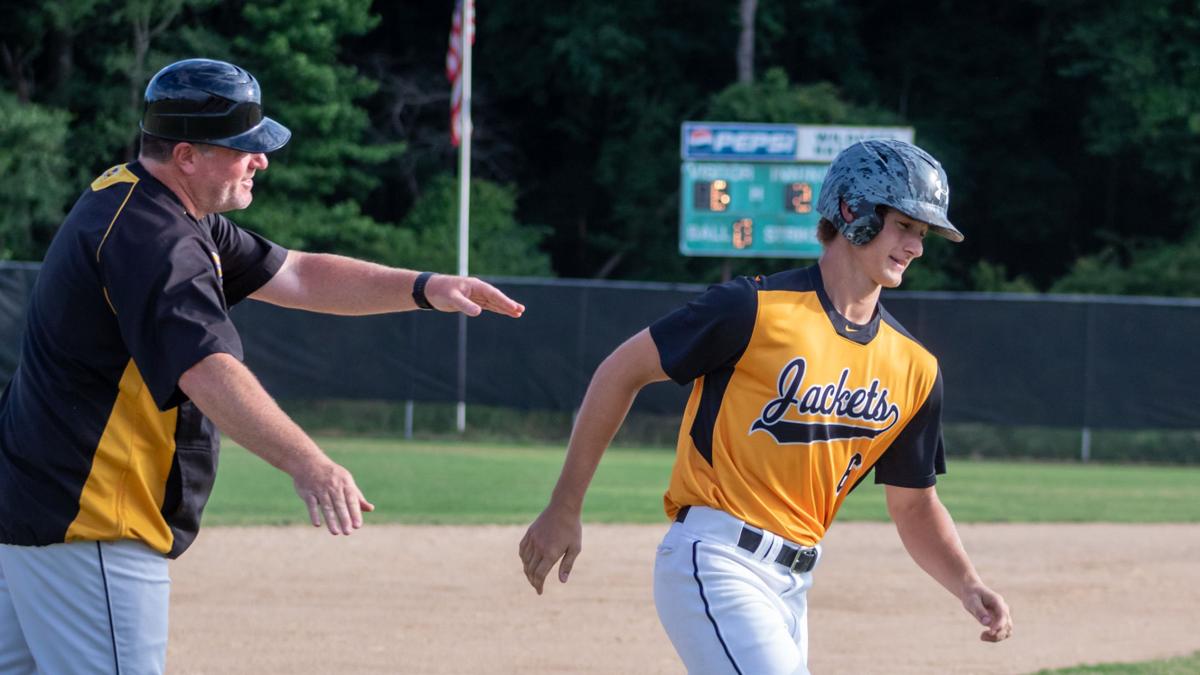 Jon Lewis Temple, right, is congratulated by Roanoke Rapids skipper Mark Snead on Tuesday after ripping a two-run homer versus Bunn. The Yellow Jackets went on to win the affair, 10-3, earning the Northern Carolina 1A/2A Conference title in the process. 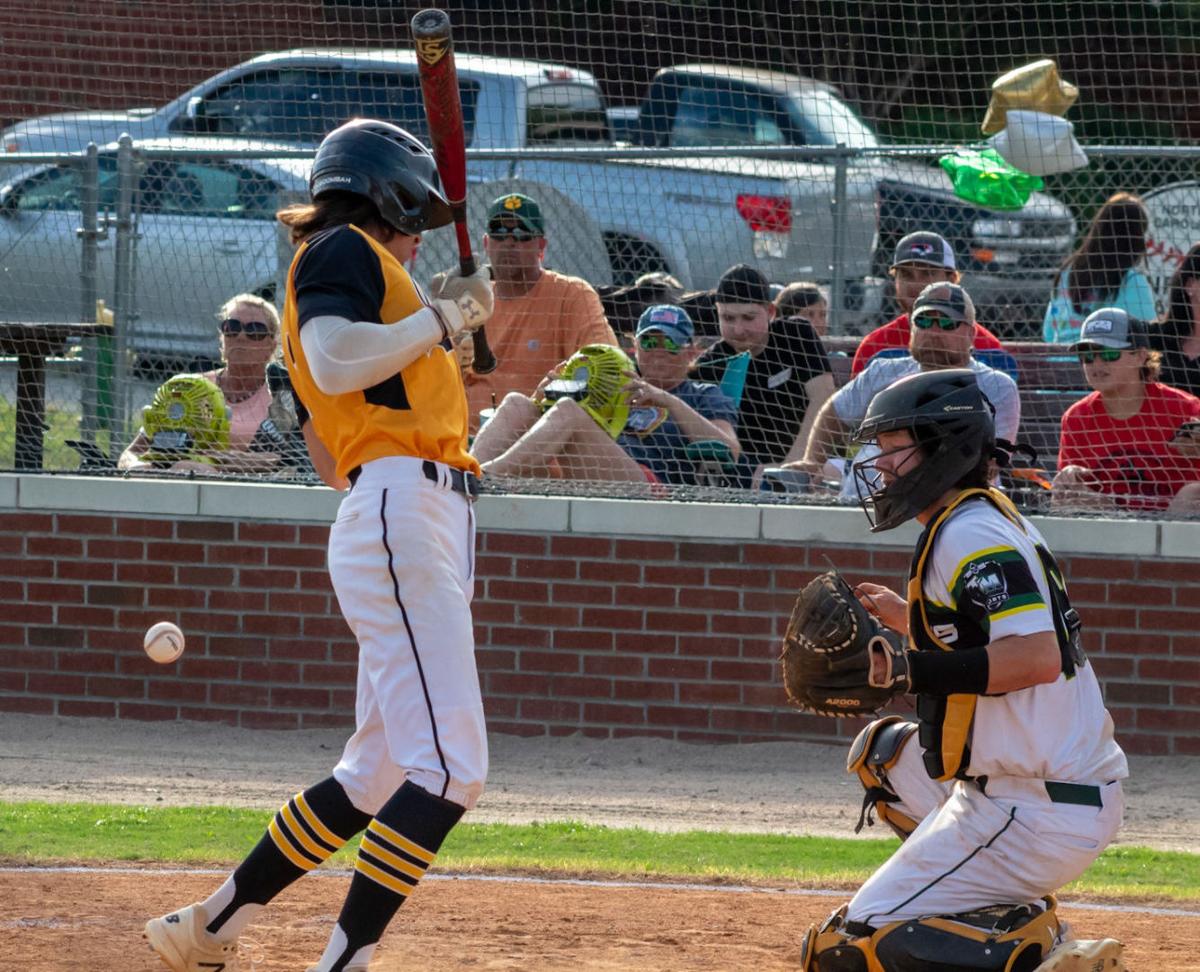 Caleb Elias of Roanoke Rapids wears a pitch on Tuesday versus longstanding rival Bunn. The junior contributed a base hit and three RBIs to help the Jackets earn a 10-3 victory.

Jon Lewis Temple, right, is congratulated by Roanoke Rapids skipper Mark Snead on Tuesday after ripping a two-run homer versus Bunn. The Yellow Jackets went on to win the affair, 10-3, earning the Northern Carolina 1A/2A Conference title in the process.

Caleb Elias of Roanoke Rapids wears a pitch on Tuesday versus longstanding rival Bunn. The junior contributed a base hit and three RBIs to help the Jackets earn a 10-3 victory.

BUNN — Jon Lewis Temple went 3 of 4 with a home run and four RBIs on Tuesday as the Roanoke Rapids varsity baseball team vanquished rival Bunn, 10-3, in a scrape that turned out to be one of significant merit.

On the evening, the black-and-gold registered 12 base hits — more than enough to help the club earn the school’s first Northern Carolina 1A/2A league crown since the 2007-2008 campaign.

And per skipper Mark Snead, a title distinctive for its brotherhood.

“What makes it special with this group is, you just watch before and after games, how these kids get along,” the coach said of the troupe, which stands 10-0 ahead of tonight’s regular-season finale. “These guys don’t want to let each other down … if you’ve got that, you’ve won half the battle right there.”

Both teams were expected to enter this week with spotless league marks, thus creating a two-game, home-and-home NCC sweepstakes — a prospect that evaporated on Monday when the Wildcats dropped a lopsided, 11-3 mystery to Granville Central.

Call the upset an information-age win, if you will, with news of it traveling quickly to Doyle Field — just not landing with such force as to make over the Jackets’ all-business travel itinerary.

Tuesday, as it turned out, would be just another day, regardless of what was available for the immediate taking.

“For us, I told them, this doesn’t change a thing,” Snead said of his team’s approach to the showdown, which was also minus injured Bunn star Aidan McKeithan. “Let’s play it like last night didn’t happen. We’re two undefeated teams, let’s go in there and do what we’re supposed to do to take care of business.”

And so the Jackets proceeded, leaving brash on the bus and no doubts at the dish, where they crossed nine runs over the first three innings to properly foreshadow the outcome.

It peeled, Temple’s second-inning dinger, over the right-centerfield fence with all the haste of an impromptu summer squall.

Then composure, of all things, as No. 6 modestly ran out his second home run of the season, before heading back to right field and ultimately, the mound, where he relieved starter Braxton Coggins, who allowed three runs on two hits through five innings.

All in a day’s work, really, for a true grinder.

“Now, he’s really focusing on through-the-ball,” Snead said of the sophomore, who has worked diligently to develop a more consistent launch angle at the plate this season. “He’s a smart young man, he’s listened, he’s very coachable — and once he realized what we were talking about, and he saw the results, it’s just snowballed from there.”

Through Tuesday, no doubt, when the work paid game-breaking dividends.

Roanoke Rapids will conclude the regular season tonight at home versus the Wildcats (10-3, 9-2 NCC), then wait on Saturday, when the N.C. High School Athletic Association is slated to publish its postseason brackets.

Barring the unforeseen, the Jackets should open the drama at home, with Bunn possibly entering the fray as the league’s runner-up 2A outfit.