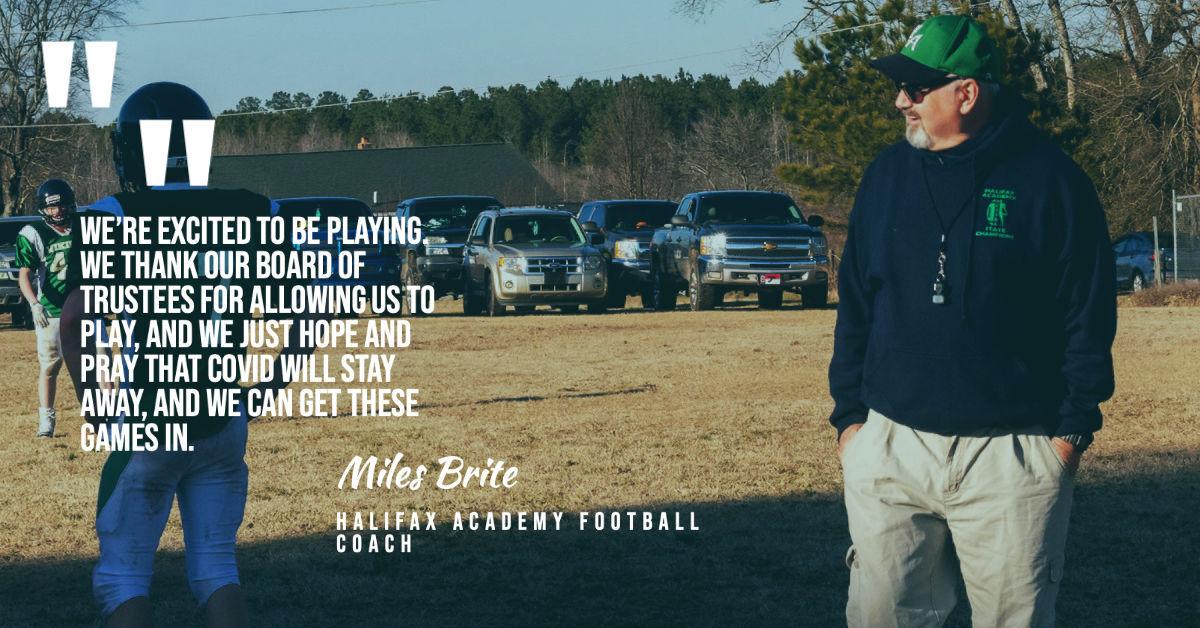 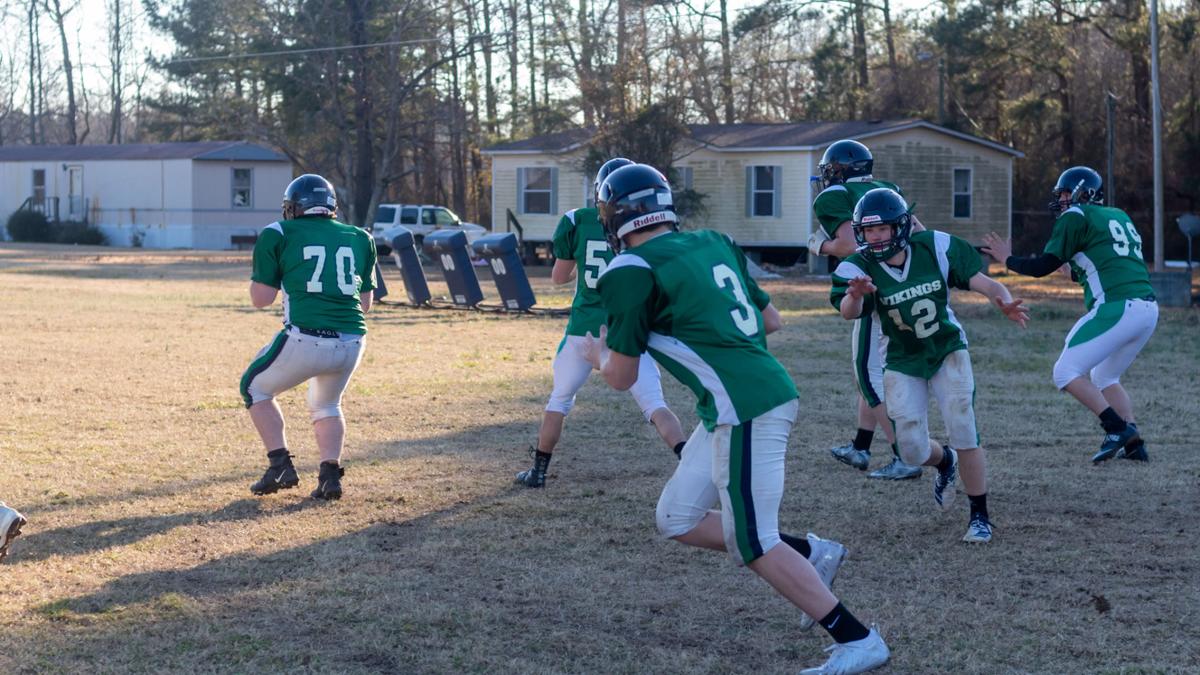 Halifax Academy quarterback Zach Elder (12) pitches to running back Braxton Hammack (3) at Wednesday’s practice. The duo will make their regular-season debut on Monday at Southampton Academy.

Halifax Academy quarterback Zach Elder (12) pitches to running back Braxton Hammack (3) at Wednesday’s practice. The duo will make their regular-season debut on Monday at Southampton Academy.

Halifax Academy varsity football coach Miles Brite, then in his first year at the program’s helm, wandered the team's locker room, hands in his pockets, delivering to the troupe his final go-time words of the year.

Floral, they were not.

And so the Vikings did just that, shaking talent-rich Bethel Christian Academy, 38-8, to win the N.C. Independent Schools Athletic Association Division II 8-Man state championship — and properly accent, by any estimation, perhaps the best campaign (10-1) in program history.

The ol’ ball coach, sporting a salt-colored goatee and warding off the day’s chill in a navy hoodie, is charged.

But following an open-air, I don’t need it tete-a-tete with junior Hunter Futrell — one of 2019’s breakout performers, and a player the Vikings will need to shine this season — Brite quickly settled, and was most willing to speak at length about his ball club.

A ball club to style in familiar trimmings, of course.

“It’s man versus man,” the coach said while watching his first team work through running-game reps. “Your job is to whip your man, and then to help your team after that … some of the kids tease me about it, but that’s where we start.”

If it ain’t broken, so goes Brite’s gridiron logic, there’s no reason to fix it — and with jewelry-box reason as proof.

Perhaps that’s the best way to describe these Vikings, who seem to go Everest-like tall and pad-level wide across the roster — a blessing Brite will use, no doubt, to continue the time-honored Viking rite of rushing the luggage.

Spearheading the no-secrets blueprint will be senior Ayden Woodall, a 6-foot-3 bruiser whose improved 40-yard dash time — down to a hasty 4.6 seconds — has Brite very excited about the road ahead, no matter the down-and-distance scenario.

“He’s a hoss,” Brite said of Woodall. “He loves it. He likes contact, he’s strong, and he’s fast. We got to get him a crease and get him going.”

There are options beyond No. 14, however, including junior transfer Wade Jenkins, Braxton Hammack, Cody Dickens and Cole Anderson — in addition to quarterback Zach Elder, who is also capable of churning out yardage from the backfield.

If anything, Monday’s 4 p.m. scrape at Southampton Academy — the first of a modified six-game slate this winter — will be a probe of sorts for the Vikings, who must learn in hurried order what pieces best fit their cause.

Trial-by-travel, if you will, and a junket likely to reveal far more about the team’s defense than anything else.

There will be high moments, without question, and probably a few that prompt Brite to go wide-eyed with frustration — but make no mistake, the carousel of coaching emotion is one he’s grateful to have in his life over the next six weeks.

“We’re excited to be playing,” the coach said of his team’s calendar. “We thank our Board of Trustees for allowing us to play, and we just hope and pray that COVID will stay away, and we can get these games in.”

Following the opener, Halifax will trek to Fuqua (Virginia) on Feb. 26, then Blessed Sacrament-Huguenot on March 6, before returning home to finalize the out-of-sorts season on Three Bridges Road — against Brunswick Academy on March 12, Southampton Academy on March 19 and Greenbriar Christian Academy, of Chesapeake, Virginia, on March 26.